Happy 11 Year Anni, Will & Kate! #TBT to the Wedding Moment That Made for the Best Meme

It feels like only yesterday that Prince William & Kate Middleton toasted 10 years of marriage with brand-new portraits, an influencer-worthy video and the launch of their very own YouTube channel. But cheers to the royal duo: April 29 officially marks 11 years of marriage. (Truly, where does the time go?) 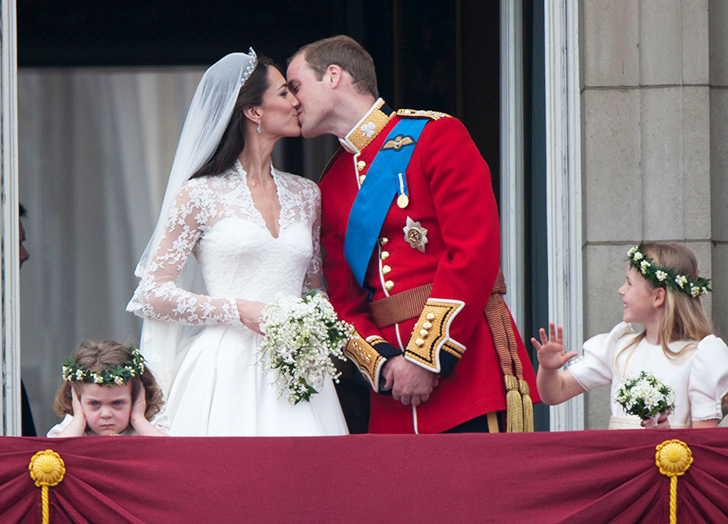 On this week’s episode of the Royally Obsessed podcast (you can listen to it here), my co-host Roberta Fiorito and I flash back to some of the more memorable moments from the occasion at Westminster Abbey. There’s Kate’s dress! Baby Prince Harry! (Seriously, he looks so young.) Pippa! Still, there’s one scene from their big day that continues to be a total standout. It also made for the best meme.

It happened when William and Kate took to the Buckingham Palace balcony post-ceremony and double-kissed, just like William’s parents Charles and Diana did way back when in 1981. A spectacular fairy tale moment, yes. But there was one teeny tiny distraction in the form of a three-year-old flower girl: Grace van Cutsem. At that exact moment, she was pictured with both hands clamped hard over her ears.

The reason? Apparently, she was not a fan of the noise of the day. (For a three-year-old, we can only imagine the roaring sound of the crowds.) But that image earned her the title of “grumpy bridesmaid” and Time dubbed Grace—William’s goddaughter—an “internet sensation.” In our book, rather than ruin the day, Grace only aided in immortalizing this moment—serving up humor and realness in a day full of pomp and circumstance.

We only hope that William and Kate have this image framed somewhere in the hallways at Kensington Palace. It’s a royal treasure, for sure.