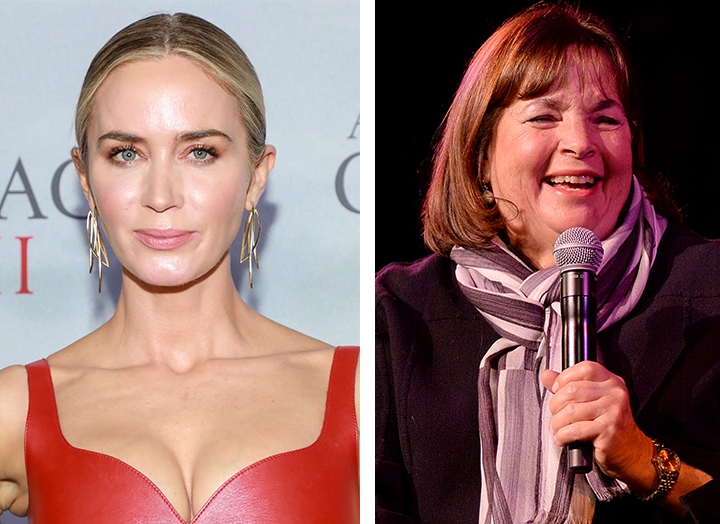 Ina Garten can add John Krasinski and Emily Blunt to her list of celebrity weddings that were a result of her famous “engagement chicken.” The Devil Wears Prada actress just revealed that the recipe might have been the reason her now-husband popped the question.

Blunt recently appeared on iHeartMedia's “River Cafe Table 4” podcast and opened up about the time she prepared the chicken during the early stages of her relationship with Krasinski. “That's it. All it took!” Blunt said. “It’s funny, I guess I just made something that I knew he would love. I mean, a roast chicken, who doesn’t love roast chicken? The roast chicken I love is Ina Garten’s roast chicken, it’s called 'engagement chicken.’ When people make it for people, they get engaged or something.”

She continued to share details about the recipe, adding, "Lemon﻿, garlic, onions up the chicken, thyme, salt and pepper, all that. You scatter onions around the chicken, but you pack them in really tight into the tray. And then you roast them really high [for] about an hour and 20 minutes and they’re done and they’re perfect. When you take the chickens out you then kind of sauté in some wine and some butter into that oniony, garlicky mixture. Oh my God, it’s divine. It’s really sticky and yummy.”

As we mentioned above, this isn’t the first time the poultry dish helped inspire a proposal. Back in 2018, Garten revealed that her recipe also played a role in Prince Harry and Meghan Markle’s engagement. While appearing on Sunday Today with Willie Geist, the Barefoot Contessa chatted with Geist how Meghan made Ina’s roast chicken for dinner, and Harry popped the question shortly after.

“I do know that she liked to cook my roast chicken, which we call engagement chicken because whenever you make it, somebody asks you to marry them,” Garten told Geist, who then said, “So what we’re driving at here is you were responsible for the royal wedding.”

We’re going to need to try this out for ourselves.