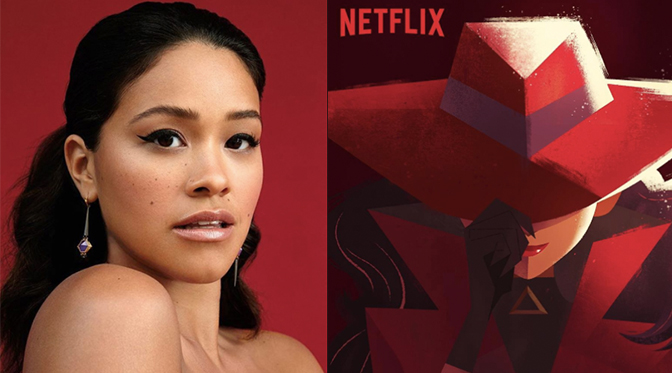 Once upon a time, when Internet Explorer was a cutting-edge program and Microsoft Encarta held all the world’s answers, there was a little PBS game show that made geography kind of fun.

Welp, it’s time to renew your passport because Gina Rodriguez is reportedly teaming up with Netflix for another version of Where in the World Is Carmen Sandiego?

Rodriguez stars as the single woman in history capable of pulling off a crimson oversized trench and matching fedora while still looking sexy—aka Carmen Sandiego— in a new live-action movie version of the hit ’90s show.

Not much is known about Rodriguez’s movie version of Where in the World Is Carmen Sandiego, but we do know that she’ll executive produce the film.

Last April, the Jane the Virgin star announced she’ll also voice the elusive wanderluster in an animated TV show of the same name for Netflix. Set to premiere sometime in 2019, the 20-episode series also features Stranger Things star Finn Wolfhard as Player, Carmen’s techie side-kick and the Thelma to her Louise.

The revival aims to dig deeper into the origin story of Carmen and will uncover why and how she became a globe-trotting hustler. We’ll definitely be taking note because that sounds like a great way to spice up our résumé.

Until then, we’ll be patiently waiting for a Where in the World is Carmen Sandiego? iPhone game reboot…because Candy Crush just isn’t cutting it anymore.