We Ranked the ‘Friends’ Thanksgiving Episodes, From Worst to Best

When it comes to festive holiday television, no one does it did it quite like Friends. The hit sitcom gifted us with ten Thanksgiving-themed episodes (one for every season) and each is unique and hilarious in its own way.

From the episode where they all play football together to the one where Monica locks everyone out of her apartment, it doesn’t get better than when the crew is celebrating the holiday Chandler hates the most. In honor of Turkey Day being right around the corner, we compiled a list of all of the Friends Thanksgiving episodes.

So, whether you’re just trying to get into the holiday spirit (might we recommend mixing up one of these Thanksgiving cocktails), or you’re waiting for your turkey to be taken out of the oven, allow this to be your bingeing guide for the Thanksgiving season. 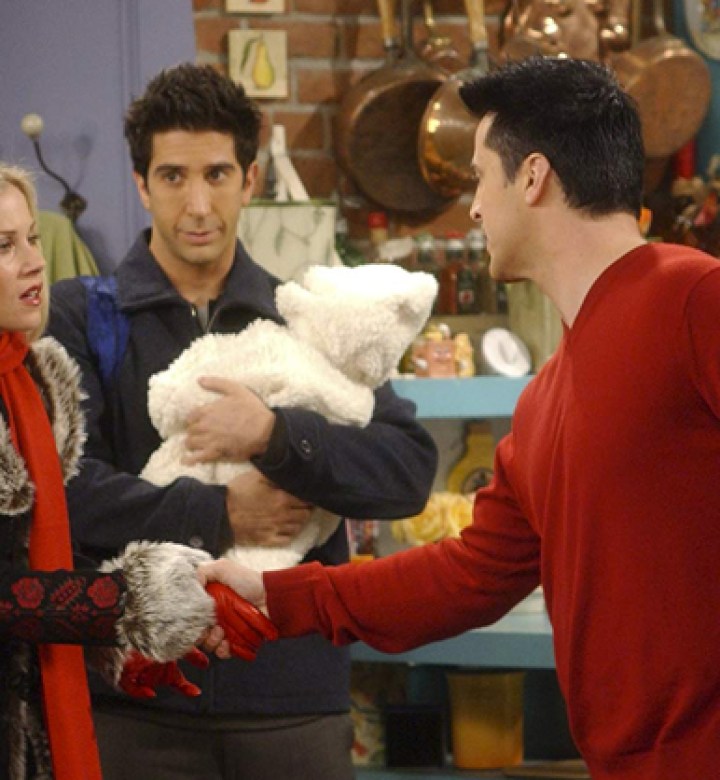 What Happens: While this one isn’t necessarily our favorite of the the list, the episode is the epitome of pretty much every family’s holiday, including family disputes. Rachel's middle sister Amy (Christina Applegate) unexpectedly shows up at Thanksgiving and sparks arguments amongst the gang. The whole thing gets quite morbid when the table discussions turns to who would get custody of Ross and Rachel’s daughter, Emma, if they unexpectedly passed away. Monica and Chandler? Ross’s parents? Annoying sister Amy? Meanwhile, Chandler has convinced Monica to use the fancy china for dinner—against her better judgment. 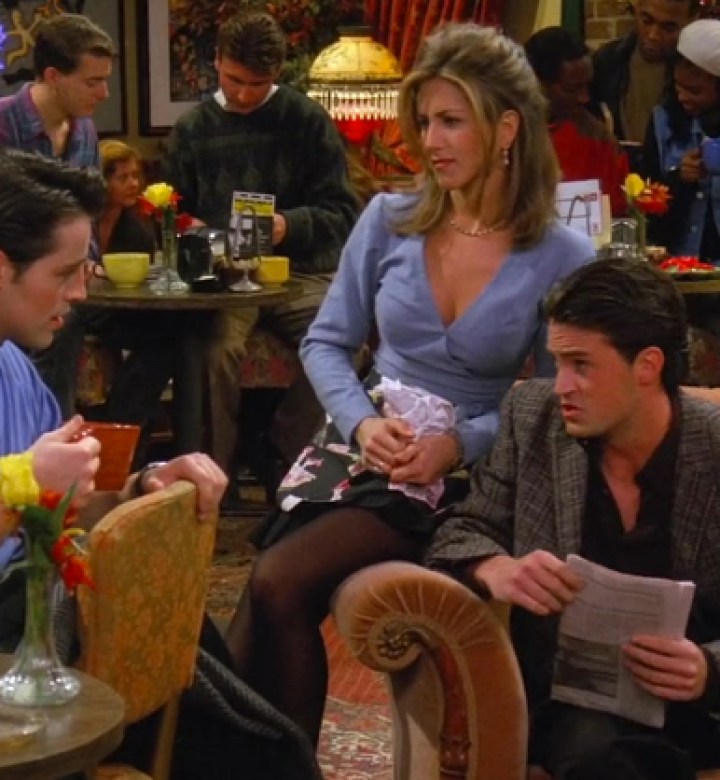 What Happens: For the show’s first-ever Thanksgiving episode, Ross and Monica's parents decide to break tradition and make other plans for holiday dinner. So, it's up to chef Monica to cook the meal herself. But the gang's plans go awry after they head to the roof to see a runaway float from the parade and ultimately get locked out of Monica and Rachel's apartment (something we see again in a later Thanksgiving episode). Plan B? Chandler’s homemade cheese sandwiches. Oh, and this is also the episode where Joey finds out that he’s the face of VD, and appears on posters all over NYC bearing his image and the caption “What Mario isn’t telling you.” 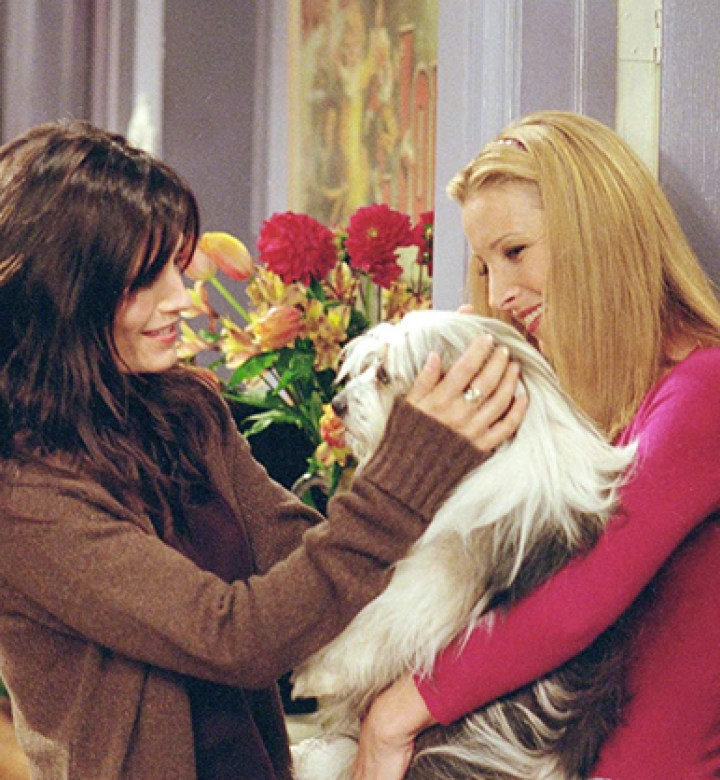 What Happens: When Phoebe sneaks a dog into the apartment for dinner in season seven, it becomes clear that Chandler isn’t exactly a dog lover (something we’re still trying to understand). Meanwhile, Ross won’t allow himself to have a plate of Thanksgiving food until he can name all 50 states from memory due to some sort of twisted game, and Joey compromises Rachel's chances with her work crush, Tag. Like the majority of the series’s episodes, there’s a lot taking place at once. However, between Phoebe trying to hide the dog from the grumpy Mr. Bing and Rachel’s attempt to fix her relationship drama, it’s a pretty enjoyable episode. 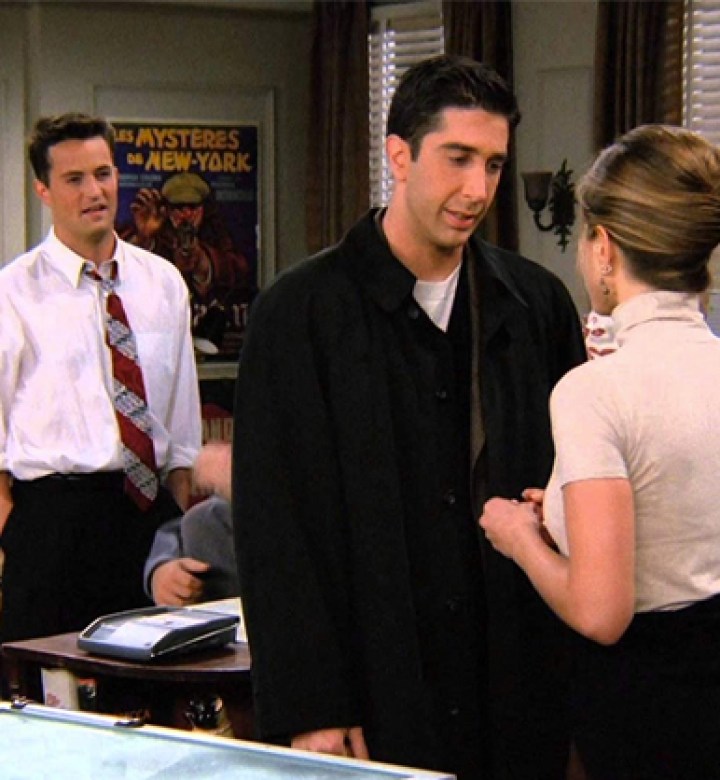 What Happens: Even though he's dating fellow paleontologist Julie, Ross kissed Rachel (uh-oh) and must decide which woman he wants to be with. With help from Chandler and Joey, he makes a list of pros and cons which ultimately and not-surprisingly backfires once Rachel gets ahold of it. Meanwhile, Monica has a job interview, for which she has to produce a number of recipes using a difficult and gross ingredient that Phoebe calls "what evil must taste like." When Monica presents her creations, she learns that said ingredient actually hasn’t been FDA approved and even has a rather interesting side-effect. This is the least “Thanksgivingy” (in the words of Phoebe) episode on this list, but it’s still on theme. 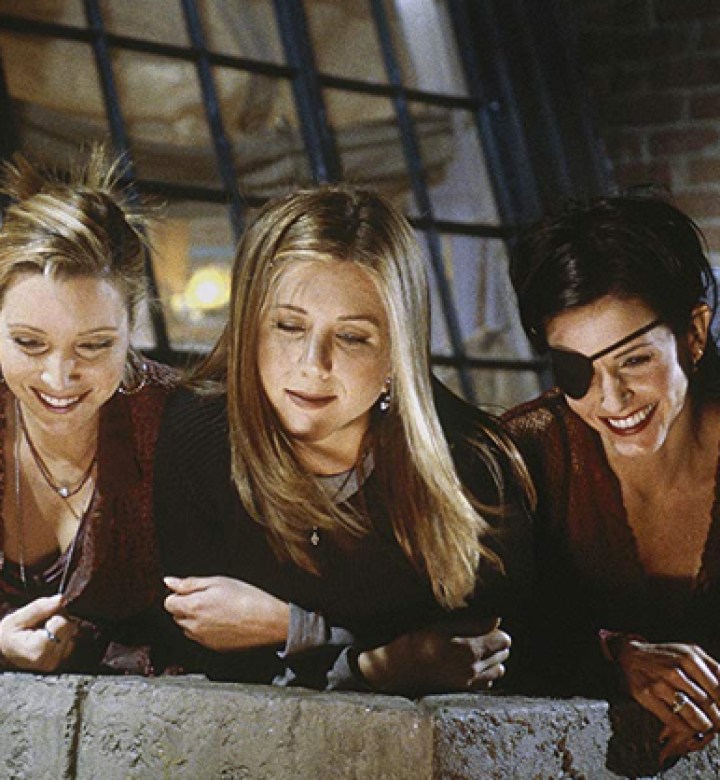 What Happens: The episode is pretty much centered around everyone’s relationship problems. After being caught kissing Joey’s crush Kathy, Chandler tries to earn his friend’s forgiveness by lying in a wooden box for six hours (we’re not kidding). After Monica accidentally gets ice in her eye in a freak Thanksgiving accident, she goes to the doctor (who turns out to be Richard's son) and is given an eyepatch that she must wear for the rest of the holiday. Between Monica's eyepatch and Chandler’s dialogue from inside the box, you’ll be laughing the whole way through. 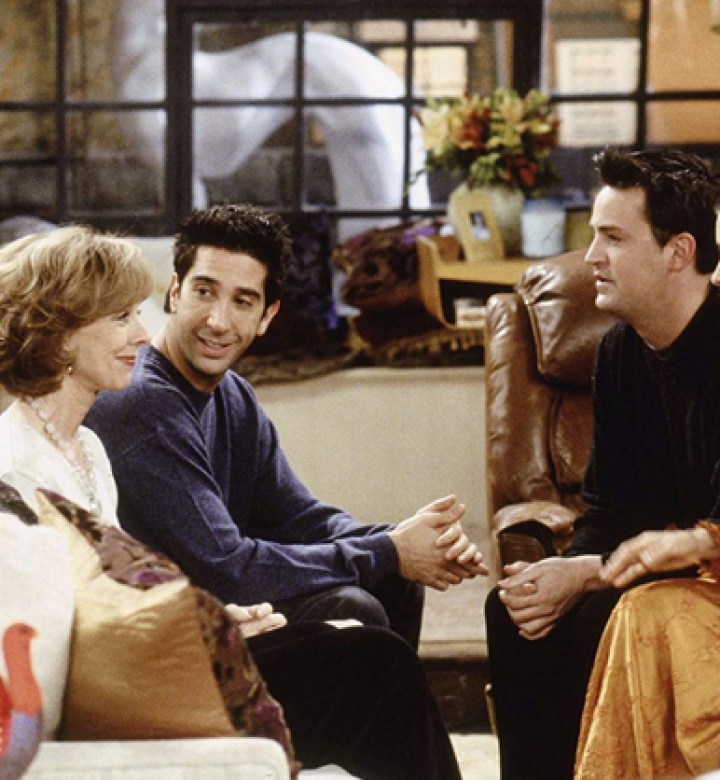 What Happens: ﻿The Geller parents join the gang this year for the holiday, and it’s Chandler’s goal to impress them. But when it’s revealed that they don't like Chandler because they thought he was the reason why Ross's college dorm room smelled like pot, Ross and Monica start to tattle on each other, setting off a barrage of hilarious confessions. Spoiler alert: Ross was the pothead. In addition, Rachel is tasked with making dessert. And although it doesn’t go as planned, Joey enjoys it anyway. Oh, and we can’t forget to mention that Phoebe reveals her crush on Monica’s dad. Yikes. 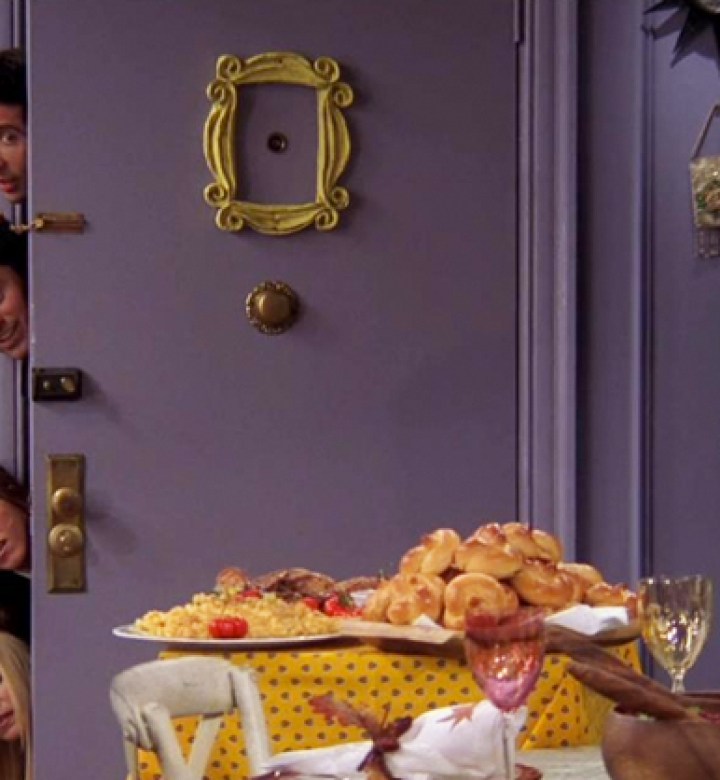 What Happens: For the series's final Thanksgiving episode, Joey, Ross,﻿ Rachel and Phoebe convince Monica and Chandler to host Thanksgiving (even though she doesn’t really feel like doing so). Chandler, who famously hates the holiday, even goes out of his way to prepare his own cranberry sauce. However, when Joey, Ross, Rachel and Phoebe end up arriving to dinner an hour late, Monica locks them out in the hallway (we totally don’t blame her). Turns out, Phoebe and Rachel entered baby Emma in a beauty pageant and Ross and Joey decided to hit up a hockey game before dinner. In the end, the gang ends up all together for one final—and heartwarming—holiday.

The 19 Best Thanksgiving Episodes from Our Favorite TV Shows 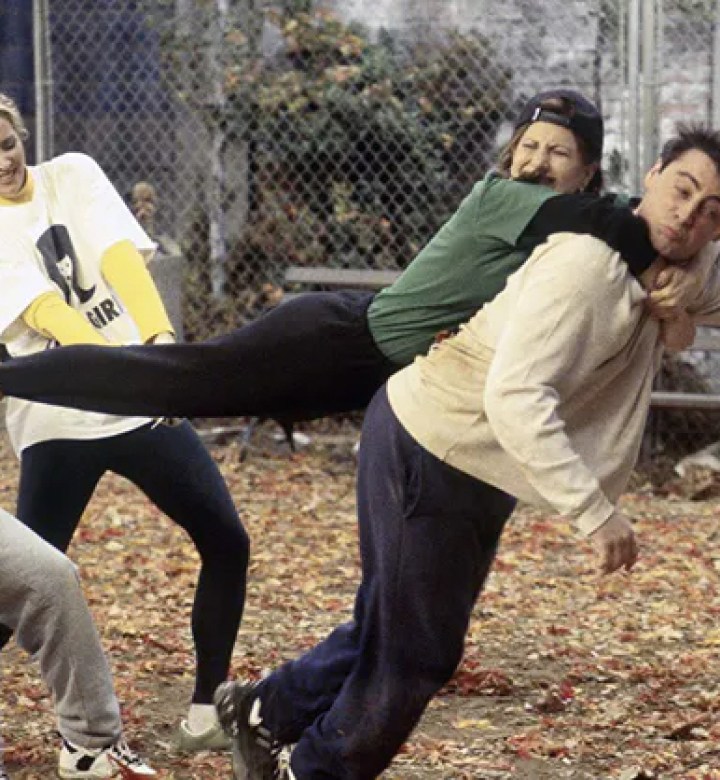 What Happens: After watching professional football on TV, an old sibling rivalry between the notoriously competitive Monica and Ross resurfaces. Of course, Thanksgiving dinner is postponed when the gang decides to play a friendly game of "touch" football. (Seriously, does it get more American Thanksgiving Day than that?!). As it turns out, this is the first time the Geller siblings have played since the time Monica broke Ross’s nose during a large family football match. As you can imagine, things get intense, to say the least. And we’re not going to lie, we enjoyed seeing the crew outdoors for an entire episode. 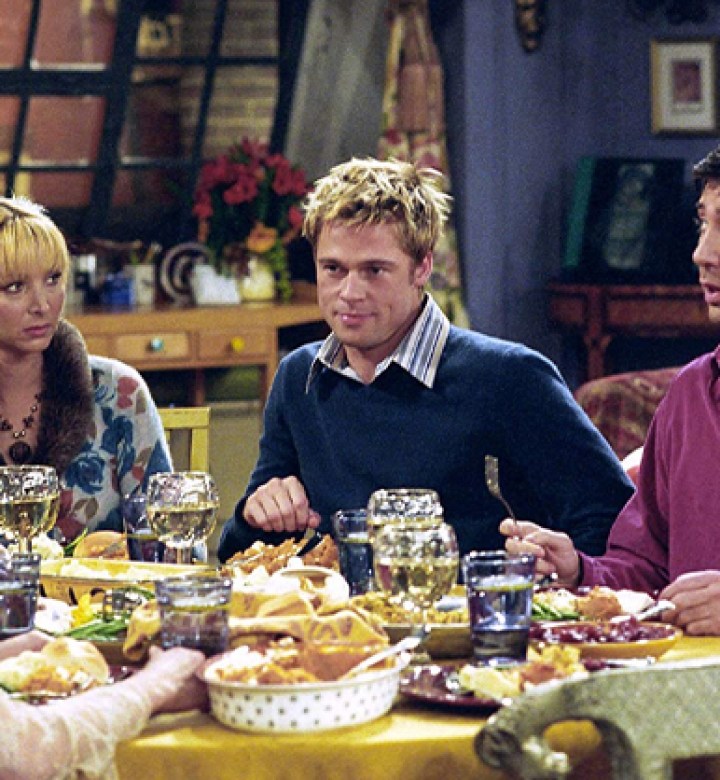 What Happens: “The One with the Rumor” is probably one of our all-time favorites—and not just because Brad Pitt makes an appearance (although it certainly helps). Monica invites over an old friend, Will (Pitt), for this year’s Thanksgiving festivities. However, things quickly get awkward when everyone realizes he isn’t a big fan of Rachel because she used to bully him back in high school. As a result, Will spread a rumor about her to the entire class, which she didn’t learn came from him until that night. And it turns out Ross helped spread the gossip even further. Perhaps the best part of the episode is that Pitt and Aniston were actually a married couple at the time. 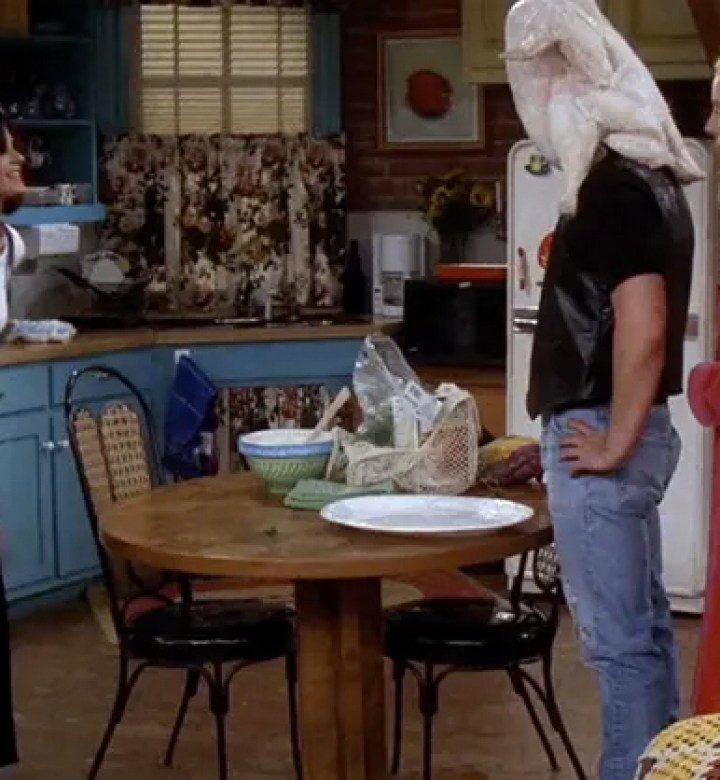 1. Season 5, Episode 8: ‘the One With All The Thanksgivings’

What Happens: It’s Thanksgiving (duh) and after Monica's big turkey dinner, Ross complains that his divorce and eviction mean he is having the worst holiday ever. Of course, this prompts the gang to reminisce about their previous Thanksgiving experiences. That means we finally learn where Chandler’s hatred of Thanksgiving comes from and we also get a glimpse of young a young Monica’s attempt to seduce Chandler, which ultimately ends up in him losing a toe (apparently he only has nine). Of course, we also get a glimpse of a few members of the gang with massive turkeys on their heads, which, in our opinion, is just priceless.