There *Is* a Correct Way to Burn a Candle (Plus, 8 Other Candle-Care Tips) 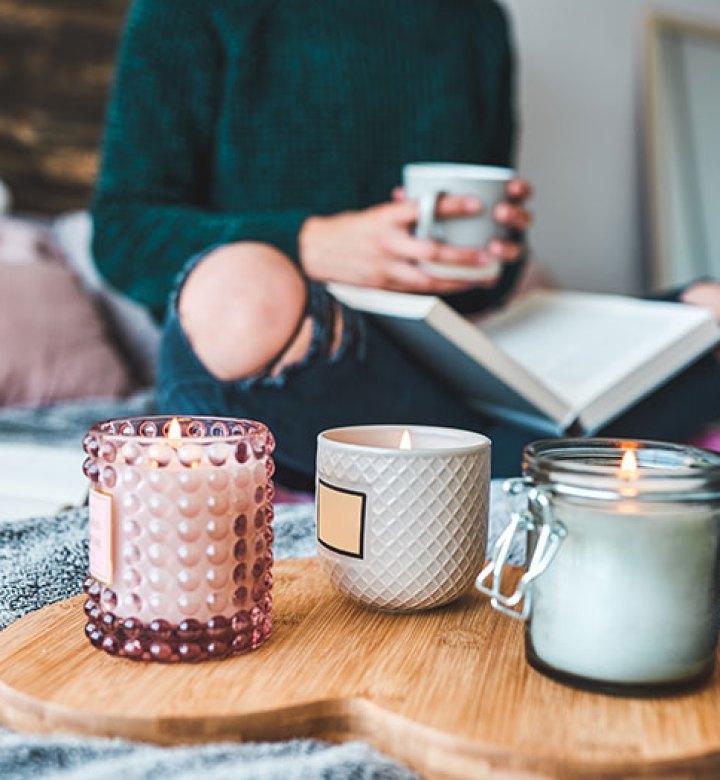 Burning a scented candle is the easiest way to bring some Zen to your home and help calm your nerves. It’s something I’ve been doing as a sort of daily meditation for the past few months and was finding very relaxing…until my roommate pointed out the large black smoke mark developing on my ceiling. So, after breaking out the Magic Eraser and spending an afternoon scrubbing away, I set out to find out how to prevent my candles from producing smoke. Turns out, I’ve been burning candles incorrectly my entire life.

There are some pretty specific dos and don’ts when it comes to burning candles and learning the correct methods can actually help your candles last longer. Here’s everything you need to know about the proper care and maintenance of candles.

The first time you light a candle, plan to let it burn for at least a full hour. Allow the entire top of your candle to melt and pool, before putting it out. For most candles, this works out to be about one hour per inch in diameter (for example, if your candle is three inches across at the top you’ll need to let it burn for three hours), although the subsequent burn times should be shorter after that.

If you don’t follow one hour/one inch rule you might notice your candle starts tunneling or leaving a ring of unmelted wax around the outer edges. There is a way to fix this, but it’s imperative that you do so ASAP—not after the wick has already burned below the top of the wax tunnel. What you’ll need to do is create a foil cover for your candle. Take a strip of tinfoil and fold it in half. Wrap it around the rim of your candle and turn up the inner edge to create a partial cover that’s open just over the wick. The foil will help concentrate the heat over the entire surface of the candle, rather than just at the center, evening out some of the earlier tunneling. You’ll want to leave the cover on for at least 15 to 20 minutes but continue to check on your candle regularly to see how it’s coming along.

DO: Trim the Wicks

You might think the longer the wick, the better. However just the opposite is true. A lengthy wick is how you end up with a stream of black smoke and can also lead to an uneven burn (which can then lead to tunneling, a shorter candle life-span, and so on). The ideal wick length is between one-quarter and one-eighth of an inch, depending on the diameter of your candle. Because you shouldn’t trim the wick if the candle is still hot, it’s best to get into the habit of snipping it just before you light up. Also, avoid letting the excess wick fall onto the top of the candle. Stray debris will mess with the way your candle burns and might leave you with the smoke you‘re trying to avoid. You can likely use a pair of scissors early on, but if you’re a frequent candle-user or like burning larger candles, you might want to consider investing in an actual wick trimmer ($11).

DON’T: Stick Candles in the Freezer

You may have seen this hack for extending the life of your candles floating around Pinterest, but it’s about time we bust that myth. There’s no real evidence that the freezer does anything to prolong your Dyptique candles. There is, however, the strong possibility that you could crack the votive, cause the wax to pull away from the walls, alter the smell of your candle or get the wax wet. We’d say it’s pretty clear that the cons greatly outweigh the potential pros for this one.

DO: Add a Pinch of Salt

If you’re lighting up your fave Otherland candle for an hour or two every day, that 55-hour burn time you found so impressive upon purchase can feel like it flew by much quicker than you’d hoped. While there are few ways to effectively extend that burn time, adding a pinch of salt does work. This changes the burn rate of the wax and can give you a few extra hours before you’ll be forced to restock. The only thing to keep in mind is that this only works if you add the salt to melted wax, so you’ll have to wait until after that initial burn to try it. You can add a touch more salt each time you put out the candle, just don’t coat the surface with it.

We will admit, you don’t need to treat this as a hard and fast rule. But generally speaking, blowing out a candle is the worst way to extinguish it (outside of dumping water on your candle, which is a huge no-no). Using your own forceful gale runs the risk of bending the wick (leading to an uneven burn, if not fixed), sending droplets of hot wax flying out of the votive or filling your face/eyes with smoke. Instead, try using a candle snuffer ($11), a glass covering or replacing the lid of the candle, so long as it’s made from non-flammable materials. You can also try using a wick dipper, a long tool with a curved end you use to push the tip of the wick directly into the melted wax to extinguish your flame without any smoke. (Just make sure to use the dipper to pop the wick back out again.)

DO: Use a Long Match or Lighter

At the beginning, you can feel free to use a small lighter or shorter matches if you prefer. But as your Jo Malone candle burns down further into the votive, you’re going to want to have a few options around that won’t require you to stick your hand and a burning match down into an enclosed space.

DON’T: Let Candles Burn Through at Once

Unless you’re working with a truly huge candle, you should avoid letting it burn for more than four hours at a time. At that point the balance between the length of the wick, the temperature of the flame and the melting wax starts to get out of sync. If you really want to fill a space with scent for a long period of time, we suggest stocking up on multiples of the same candle and rotating them throughout the day.

DON’T: Stow Votives on Your Windowsill

Leaving candles in direct sunlight runs the risk of diluting the scent and softening the wax which messes with the candle’s burning ability when lit. It can also cause discoloration if you’re thinking about aesthetics. Keep them in a cool, dry, dark place instead, like atop a bookshelf or on your bedside table. This will ensure your Boy Smells candle stays in tip top condition for as long as possible.

home
by Dagmara Cintron
30 Valentine’s Day Decorations to Bring Back That Loving Feeling
home
by Sydney Meister
Nate Berkus Just Told Us How to Create a Capsule Wardrobe For Your Home in 5 Simple Steps
home
by Destinee Scott
If You Only Buy One Candle This Valentine's Day, Make It This Glasshouse Fragrances Find
home
by Sydney Meister
The Coziest, Chicest Luxury Bedding We’ve Seen, From Frette and Matouk
home
by Destinee Scott
The Wayfair Big Furniture Sale Is Up to 50 Percent Off & We Found 12 Items That Won't Disappoint
home
by Karelle Mckay
Is the Viral Bissell Steam Shot Cleaner Really Worth the Hype? Here’s Our Honest Review