Need Ice for a Party? Head to a McDonald’s Drive-Through (No, Seriously) 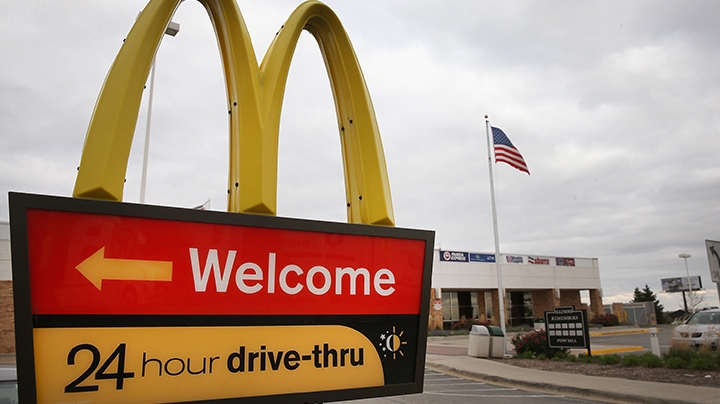 This past Rosh Hashanah in September, I asked my best friend, Erin, what she planned to bring to her mom’s house. “I’m stopping at McDonald’s for the ice,” she said matter-of-factly, as if picking up “the ice” from a hamburger franchise was as much a tradition as matzo ball soup. “You go to McDonald’s for ice?” I questioned.

The conversation left me…shocked. For one, I had never heard of this McDonald’s ice tradition in all the 20-plus years we’ve been friends. And two, she acted as if stopping at Mickey D’s for some ice on the High Holidays was something everyone does. Even the way she used “the” (as in the ice) implied this was of critical importance.

Many phone calls, an adopted dog and several months later, the McDonald’s ice thing still kept me up at night. Is this something other people do? Is McDonald’s ice that much better? Can you just, like, order it at the drive-through? Do they have it bagged and ready to go? Do they laugh when you say “One bag of ice, please!”? So many questions…

And so I decided to investigate the story. But first, I had to go straight to the source: Erin’s mom, Kathy. I wrote Kathy and her daughters (my friends), Erin and Daniella, an email:

I pitched the McDonald’s ice story to my team, and they wanted me to fully investigate the story. If you’re comfortable speaking about this highly classified matter, would you mind answering the questions below? This might wind up being my biggest scoop.

Why McDonald’s ice for hosting? What makes it better? (Be honest.)

How much does it usually cost?

When did you first discover this hosting hack?

Do guests ever remark on the quality of the ice?

How do you decide which daughter you want to go get the ice?

I waited. I waited the most excruciating 48 hours of my life. But then a new email popped up at the top of my inbox. It was Kathy.

It’s so funny you want to do a story about ice!!!

I first learned about McDonald’s ice when I was invited to a party at a neighbor’s house and noticed how nice her ice was. I commented on it and she told me she sends her husband to McDonald’s for ice whenever they have a party. I, too, was surprised that McDonald’s (1) sold ice to the public and (2) that someone would specifically go there to buy it, however, the quality was so good that from that point on that’s where I go for ice.

The reason I like the ice so much is that the cubes come in small rectangles, causing the ice to break apart easily for serving. The cubes seem clearer than your average store-bought ice cube, and I feel like the drink is a little more refreshing with these cubes. (Also, it avoids having to slam the bag of the ice on the ground until it spills all over the floor, trying to break up the cubes.)

I don’t know how much the ice costs, as I’ve never gone to buy it personally. Sending someone to go buy ice is one of the perks of hostessing a party.

I normally send Erin and Jacob for the ice, as they’re usually driving up north and can pick it up on the way. The last couple of times, though, they’ve told me McDonald’s didn’t have ice and brought a bag of regular ice. I suspect that they aren’t telling me the truth because they never make eye contact when they tell me this. You might want to ask them why they hate buying ice at McDonald’s so much.

Let me know if I can be of any further help in this important investigation.

When I reached out for comment regarding her mother’s accusation, Erin responded via email, “Haha, Mom!! That is not true!!! They have been sold out, I swear!” Hmm. I pushed her on it. “Why do you hate picking up the ice?” I texted her. She stuck with her story: “I don’t!” I then asked her again how much she thought it cost, to which she responded, “idk…$4? Jacob would know.”

I texted Jacob, “Do you know how much the McDonald’s ice costs that you pick up with Erin? For like holidays?” He responded immediately. And once again, it was not what I expected, “Lol I dunno like $2 or something. It’s, like, really cheap. Popeyes does it too.” He went on to explain that although he had never had the Popeyes’ ice, some locations sell ten-pound bags for $1, and while he’s never tried it, he’s sure it’s good, because it’s ice. He also confirmed that you can, in fact, order the ice from the drive-through.

And while the story seemed complete, Kathy’s questions lingered in my mind: Was Erin lying? Is McDonald’s ever out of ice?

I had to ask Jacob one final question: “Is McDonald’s ever out of ice?” I waited eagerly as three dots blinked, indicating he was typing. Finally, the message pinged: “Uh, once the one on Waukegan was closed on Christmas and we had to go to a gas station.”

Boom. Jacob’s story supported Kathy’s accusation, but a quick Google search showed that the McDonald’s in question was closed on Christmas Day, which explains Kathy’s disappointment and Erin and Jacob’s failure to bring McDonald’s ice. Still, I’ll never really know if Erin and Jacob have lied on other occasions, but I do feel my work here is done.

Long story short: You can buy ice in bulk from McDonald’s (and Popeyes). It’s cheap, it’s good quality and you can send your kids to do it if you want to give them something to keep them busy.