I’ve never owned a stand mixer. No, really. It usually isn’t an issue—until I need a fresh batch of cookies or homemade whipped cream. Those types of projects quickly turn into arm workouts for me, but the KitchenAid stand mixer’s price tag always felt like too much of a splurge for someone who doesn’t bake that often. So, I’ve gone without, trusting that my lowly whisk and right hand will get the job done. Then, I heard about the Acekool Mixer MC1, a tilt-head, ten-speed stand mixer that just became available in the U.S. after much popularity in the U.K. Once I saw the price tag, I knew it was time to hang up my whisk. Here’s everything you need to know about this game-changing appliance. 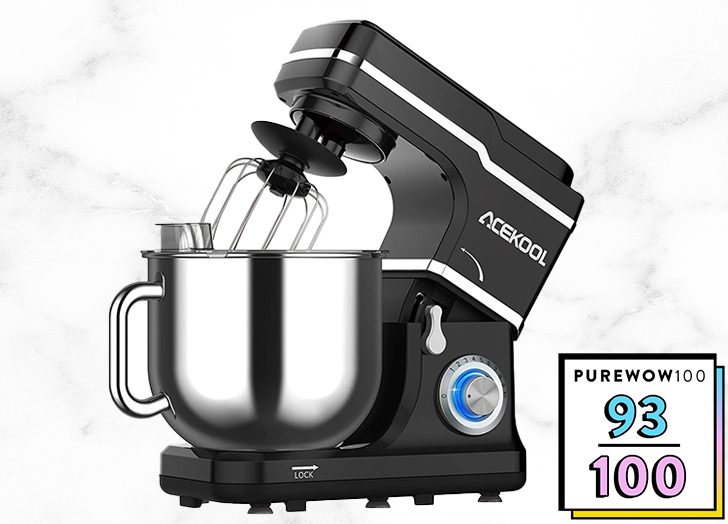 The Acekool Mixer MC1 is a compact stand mixer that’s equipped with a high-performance 660-watt motor, ten speeds and a roomy 7.5-quart stainless-steel bowl for mixing. (Considering many competitors clock in at 3.5- to 5-quart bowls with 300 to 500-watt motors, this is truly impressive.) The speeds correspond to three handy attachments included with the mixer: a dough hook, flat beater and whisk. These make it possible to whip up everything from bread to crepes to cookies. The bowl’s large handle makes it easy to hold and maneuver, and the appliance will stay in place while in use, thanks to six nonstick suction cups on the bottom that cling to your kitchen counter. More importantly, its solid connecting rod design is meant to absorb vibrations and keep the appliance steady for minimal noise and shaking. I put these claims to the test by baking a batch of salted brown butter cookies, some with chocolate “chips” (aka a chopped hunk of Tony Chocolonely’s dark chocolate that I hadn’t devoured yet). 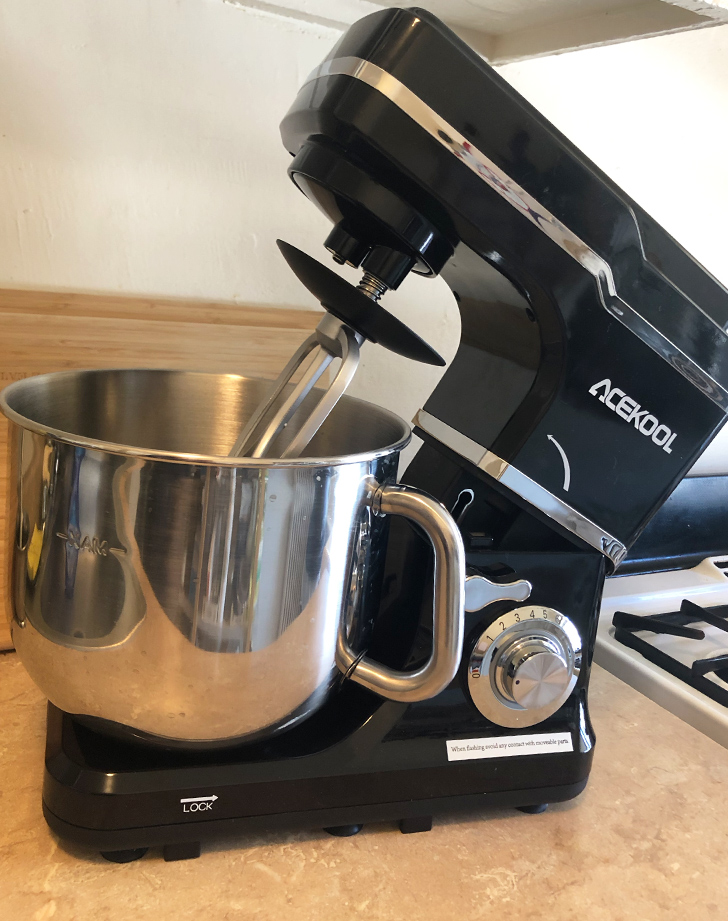 The mixer arrived assembled with the bowl, whisk and splatter shield attached; the dough hook, beater and black baffle were wrapped separately. For full transparency, two small pieces of plastic were already cracked off the splatter shield when I opened the box, but it still clipped onto the bowl just fine, so I didn’t sweat it. After washing everything, I attached the black baffle (it’s basically a dust cover that clicks into whatever mixing blade you’re using so food doesn’t splatter while you mix) to the beater, because Acekool recommends using that head for medium-heavy mixtures like crepes and cookie dough.

I’ll admit it took me a few tries to finally get both pieces attached to the blade connector, and being a total newbie to stand mixers, I found the switch knob that allows the mixer to tilt back and forth to be a bit unpredictable. (It works as directed, but the motion is more delayed and sudden than smooth. There were a couple instances when I thought I had tilted it as far as it could go in either direction, but it could have gone further.) Once everything was locked in place, it was time to warm ’er up: Acekool recommends plugging in the mixer and letting each speed run for a few seconds when you first use it.

When I finally got to see it on my counter, I realized it takes up the amount of space you’d likely expect—not too much, but it isn’t excessively small either. (However, I will point out that it’s more compact than the 5-quart KitchenAid Artisan Series.) The only way that the KitchenAid model definitively trumps Acekool’s is with its massive variety of colors. The Acekool Mixer MC1 is currently only available in black, silver and red, but as someone who doesn’t bake often (and has very limited counter space), I won’t be leaving it out 24/7 anyway. (Also, I might be in love with KitchenAid’s lavender cream-colored number, but is the paint job worth the price tag? My wallet says no.)

Once I was finished and attached the splatter shield, it was time to whip up the cookie dough. 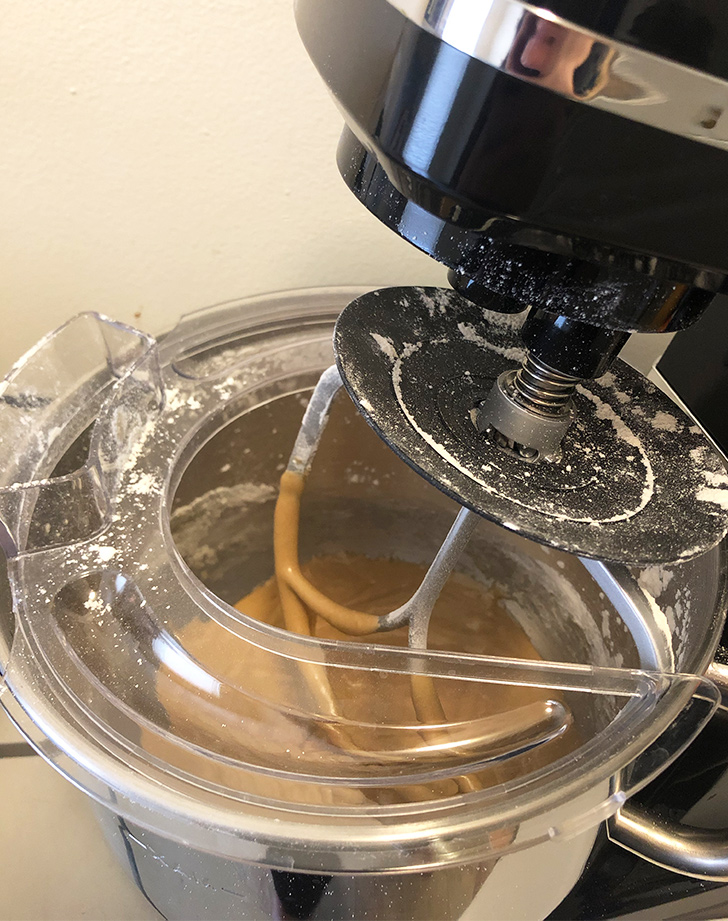 Let me start by saying I’m obsessed with the splatter shield. It has a hole so you can continue adding ingredients to the bowl without having to pause the mixer or remove the shield. I guess the bowl could be a little roomier, because space is a bit limited with the shield attached. But then again, it would take up more space in the cabinet or on the counter. So, I’m satisfied with the deep bowl as is—I just slid the shield over when I needed more space. Just one tip regarding this accessory: Be really careful when tilting the mixer head back while the shield is still attached to the bowl—it pops off easily.

While the shield seemed to do its job, the black baffle accessory really worked like a charm—it acted as a sort of tiny plate for all the stray dry ingredients that were flung upwards. So, the mess was limited to the accessories rather than the appliance and the accessories (yay!).

I started by turning the dial—which is equipped with a LED light indicator, so you always know when the mixer is on—to speed four to mix the wet ingredients, the lowest recommended setting for medium-heavy mixtures. I increased the speed to six for the dry ingredients, then let the dough rest before scooping the cookies onto a sheet.

I wouldn’t say that the mixer was totally quiet, but then again, what mixer is? Despite the Acekool’s powerful 660-watt motor (the five-quart KitchenAid Artisan Series mixer is only 300 watts, for comparison), it stayed pretty stable through speed eight and the noise didn’t really pick up until reaching speed six. As expected, speeds eight through ten are particularly loud, but that’s because a faster speed is necessary for light mixtures that call for being whipped or whisked, like cream, cake batter or sauce. 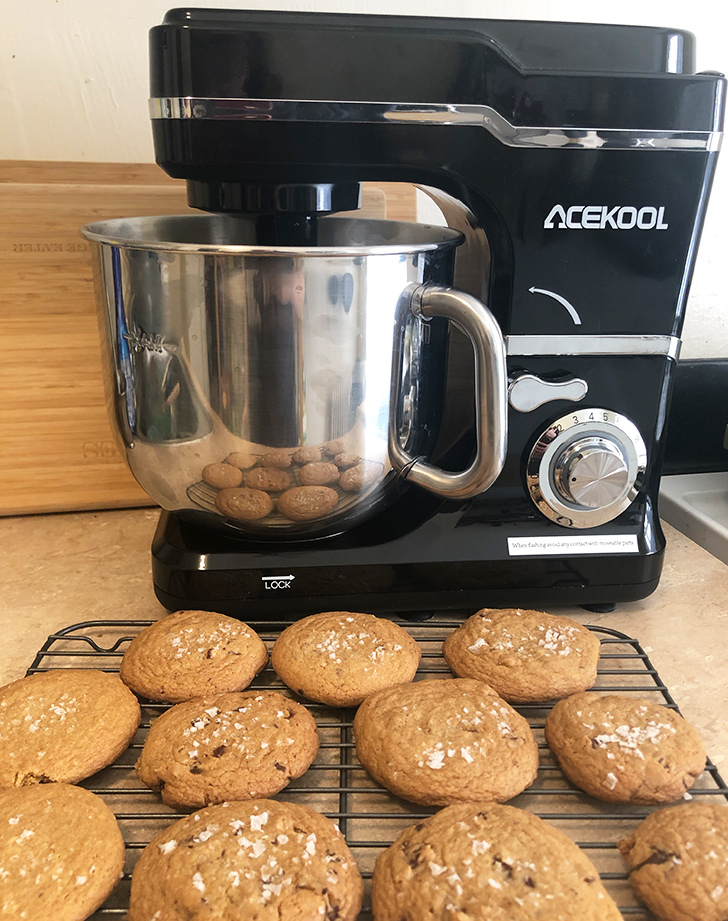 The mixer pieces were a breeze to disassemble and clean. All the attachments are dishwasher friendly, but that’s another appliance I haven’t had the pleasure of owning just yet. So, I washed the bowl and accessories by hand, then wiped down the mixer (not that there was much to clean off of it in the first place).

It’s powerful, easy to figure out, a cinch to clean and looks sleek on your kitchen counter. All the accessories allow you to tackle just about any culinary project, be it cake or homemade pasta. But most importantly, the mixer is about one-sixth the price of a five-quart KitchenAid Artisan Series mixer. IMHO, unless you bake nonstop and it’s worth the splurge or you seriously don’t want to sacrifice your kitchen’s aesthetic for the sake of cost, the Acekool Mixer MC1 is an easy win. Did we mention it comes with a three-year guarantee of replacement or refund? Go ahead and treat yourself—your forearms will thank you.

Can Breville’s Bakery Chef Stand Mixer Hold Its Own Against a KitchenAid? We Put It to the Test