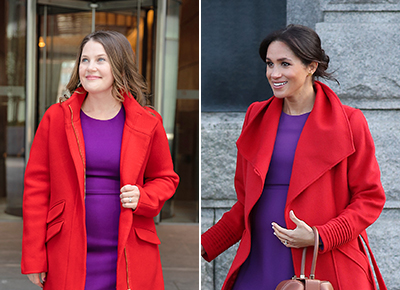 Since Meghan Markle’s arrival on the royal scene—and on Prince Harry’s arm—in October 2017, she has consistently delivered a masterclass on how to dress for the spotlight. Yes, even under the watchful eye of the entire world…and her grandmother-in-law, the Queen of England. Casual.

But after approximately two years of fawning over each and every outfit Markle has worn in public, I began to wonder: How easy would it be to replicate her seemingly attainable looks in my day to day?

After all, Markle is a duchess who likely has the best designers in the world on speed dial. I, on the other hand, am a married mom of a 16-month-old with a personal style that falls somewhere between Madewell and Ann Taylor. I make every effort to leave my apartment looking put together, but there are plenty of days when the city (and, quite frankly, the humidity) gets the best of me. And—let’s be real—when sneakers are so in vogue, why would this working mom wear heels?

It then spiraled into more questions, like: Could I pull off the poise and polish of Meghan Markle as I waltz from the A train to my midtown office? How about while summoning an Uber for a moms’ night out or weaving around strangers while pushing my son in a stroller en route to his weekly music class? I was about to find out.

Together, with the help of PureWow’s fashion editor, we did a deep dive into the best of Markle’s looks. The only rule? Each of the outfits we chose had to have a detail that was signature to Markle but felt like a sartorial risk for me. With that in mind, we reached out to Rent the Runway, which we worked closely with to source similar pieces to replicate what Markle wore.

Could I live life—or at least dress—like the Duchess of Sussex? The proof (and style lessons) learned is below. 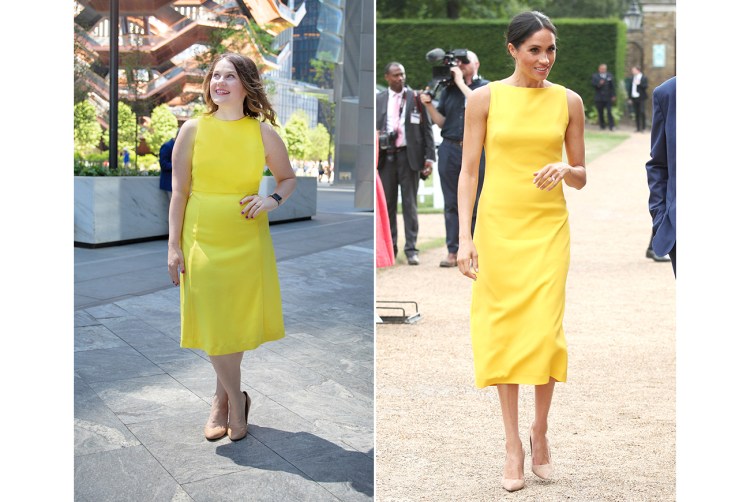 Leave it to the Duchess of Sussex to proudly rock the most daring hue of the year: sunny yellow. The bold pop of color made a royal statement as she joined Prince Harry for a reception last July for the Commonwealth Youth Challenge. I, however, wore a similar iteration for a casual Monday at the office. I must admit, going sleeveless felt pretty daring on a chillier-than-typical spring day, but so did wearing three-inch heels. (FYI, most of my coworkers proudly champion designer sneakers as part of their office uniform.) I felt extremely corporate as I shuffled between meetings and filed stories on deadline at my desk. I also had to wear Spanx for the whole day…and we know how uncomfortable that can be.

My Takeaway: While I loved the vibrant color and tea length (which was surprisingly flattering on someone who’s five foot two), I felt self-conscious, especially at the office, with totally exposed arms. Kudos to Markle for pulling this off with a zillion cameras capturing her from every side. But when I met a friend later for dinner and a concert (on a weeknight, yes!), this dress didn’t need any accessories to make a statement and I loved how low-effort that felt. As a result, I’d wear it again. To the office? Sure, as long as I had a jacket on hand. 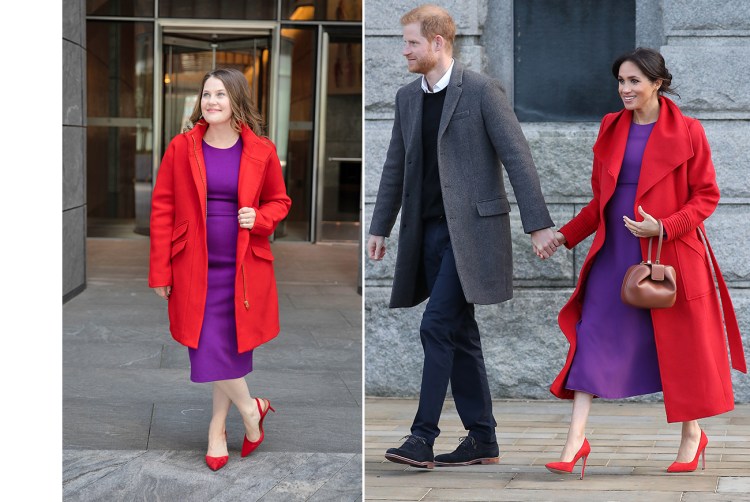 This was the outfit that turned the most heads. Sure, Markle wore this when she was nearing the end of her second trimester (and on a royal visit to honor the work of Tomorrow’s Women, an org that helps women make positive life changes), but I threw it on for a day at the office, stopping by a press event on the way in. I could see people do a double take as they looked me up and down: “Is that the…?” I found myself cutting them off and explaining my royal experiment before they could finish their question.

My Takeaway: This ensemble—contrasting colors and all—might have been my favorite of the entire week. It felt thoughtful and sophisticated and there was no way that I wasn’t going to command all the attention in the room. It also inspired me to pay more attention to my accessories. In NYC, function tends to come before fashion a lot of the time, but red shoes to match a gorgeous red coat? I would have never thought of that matchy-matchy combination, but I might make it my go-to from now on.

Get the look: Donna Morgan dress; J.Crew coat (both via Rent the Runway); Ann Taylor heels ($128) 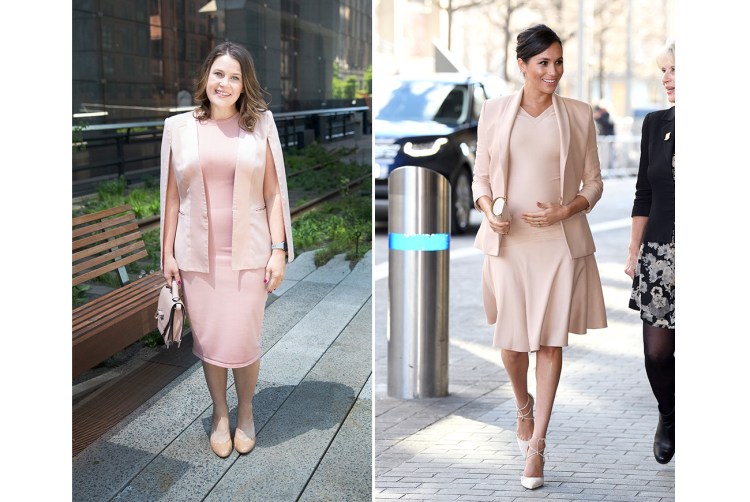 Markle opted for this blush dress and blazer for her first official visit to the National Theatre. Royal fans “oohed” and “ahhed” over the monochromatic color scheme because few people can pull off such a muted shade of pink with confidence. TBH, when our fashion editor suggested I test-drive this particular look, I wasn’t sure. I’m pale as a ghost and was certain this color palette would wash me out. But I really went for it in a body con dress (cue the Spanx, again) and a jacket that also doubles as a cape. I even reached for a blush handbag and, in true royal fashion, kept it mostly empty—aside from my phone and work ID.

My Takeaway: You know what? I loved this look. I felt so professional. And chic. I even considered buying a suit last week in pale pink—that’s how much I was into this hue. I also wore this ensemble to music class with my son. I kind of felt like I was queen of the room as I knelt down and played with my toddler, who was busy shaking maracas and having a glorious time. Although, it’s worth noting, I did kick off my heels. 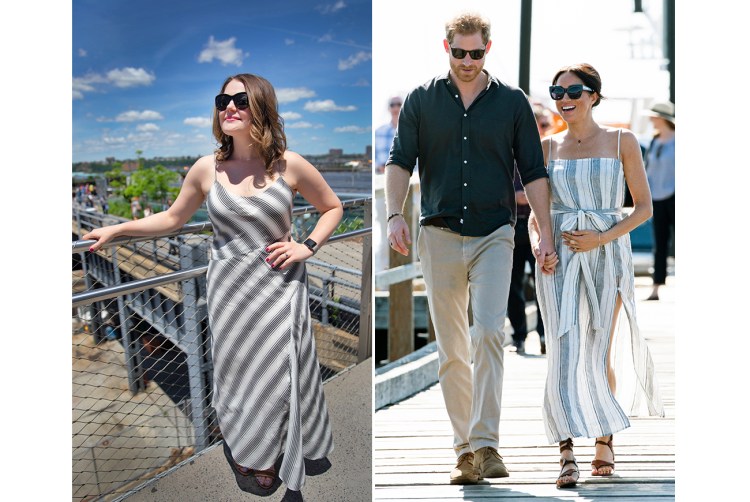 Day 4: The Breezy Sundress (with A Slit)

Flash back to October 2018 when Markle had first confirmed she was expecting. Eschewing maternity garb (it was still her first trimester, after all) she went for a daring pinstripe maxi dress from Reformation, complete with a thigh-high slit. I couldn’t find a perfect match—but I was also a bit wary of showing that much skin while chasing after my son.

My Takeaway: The dress I chose did teach me a valuable style lesson: Diagonal stripes are not my friend. I wore this breezy dress for a sunny day at the Brooklyn Botanic Garden with my husband and son. All I wanted was a cute pic beneath the cherry blossoms as a family, but I hated every shot, thanks to the harsh angles this striped dress created. I did love how airy and relaxed it felt. Despite the photo fiasco, maxi dresses are quickly becoming my new summer go-to.

Get the look: Theory dress (via Rent the Runway); Sarah Flint sandals ($245) 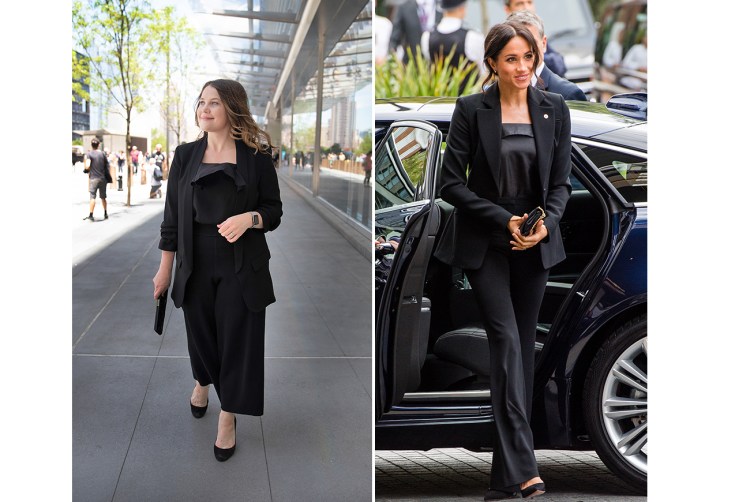 Move over, LBD. When Markle attended the WellChild Awards last fall, she opted to wear black-on-black, in suit form. It was a combination that looked both dignified and crisp. Looking through my own closet, I realized: I do have a black suit, although mine includes a pencil skirt. Still, I hardly ever bust it out for fear that my colleagues will think I’m interviewing elsewhere. (Isn’t that the cardinal sign?) But on this day, I followed in the royal’s footsteps, wearing fitted and cropped pants, a hip-length blazer and (my favorite flourish) a silk top that was actually kinda sexy. Talk about powerful and put-together.

My Takeaway: I not only felt more alert in meetings, I felt more confident about speaking up in this suit. (A trick the duchess also relies on, perhaps?) All in all, at the end of a week filled with Markle Sparkle style, I felt exhausted—but also in touch with the impact that a meticulously planned ensemble can have on your mood. Would I wear an all-black suit to the office again? Maybe. Would I pair it with my Veja sneaks—a recent purchase that’s also a Meghan Markle fave? Absolutely.

While Markle consistently looks flawless, being this pulled together and polished on the regular is really hard work—whether you’ve got a royal style squad or not. After just a week, I not only had blisters, I had a renewed relationship with my steamer and a newfound commitment to finding a good tailor. (That’s the real royal style secret, right?) Pain points aside, I did learn something: Dressing to impress, as the duchess does daily, accomplishes exactly that. It’s also an act of self-care. After all, it’s not a coincidence that I felt more confident throughout my five-day experiment. Did that mean I got more work done? That’s TBD, but I certainly said yes to more plans and opportunities.

After a week of walking in Meghan Markle’s shoes—high heels included—I’d for sure do it again with a simple caveat. I’d treat myself to more Ubers. After all, duchess fashion seems significantly easier to pull off when you’re shuttled door to door.

For this story, PureWow partnered with Rent the Runway, which offers an unlimited membership program that provides a subscription to designer fashion, and Shoott.com, an on-demand photography service that makes high-quality professional photo shoots available to all.

I Went to Duchess School for a Day, and Now I’m Basically Meghan Markle

lululemon Cyber Monday Is Here Today, Gone Tomorrow & These Are the 12 Top Styles to Buy

The Cyber Monday Madewell Sale Is Here with Discounts of Up to 60 Percent Off: Here Are 12 Items We're Buying Right Now

The J. Crew Cyber Monday Sale is Serving More Than 60 Percent Off—Here's What to Grab Before It Sells Out