Gross (but Necessary) Question: Why Is My Puppy Eating Poop?

Poop is gross. Cleaning up after your dog isn’t fun, but it’s part of the deal. You pick up the waste and move on. When your puppy eats poop, though, it’s harder to let that go. It’s as unglamorous as it is anxiety-inducing. Dog parents who have wondered why their puppy is eating poop need not worry: Eating poop is normal behavior for dogs, though it’s not a habit you want to encourage. We commend you for getting this far (searching a phrase with the word “poop” in it on the Internet), and are here to tell you everything you need to know about why your puppy is eating poop. 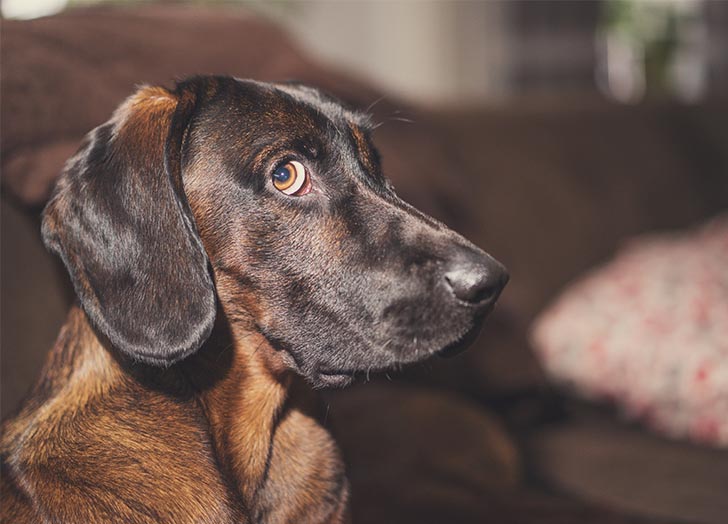 The scientific term for ingesting feces is coprophagia (kop-ruh-fey-jee-uh). Pups who eat feces are known as coprophagic canines. While there isn’t a ton of research on this subject, a few studies have dug into coprophagy. One 2012 survey-based study from the University of California-Davis collected data on thousands of coprophagic dogs and the methods owners used to curb the habit. The researchers, with Dr. Benjamin Hart at the helm, found that 16 percent of dogs had been observed by owners consuming stool at least six times. Of these frequent offenders, 79 percent had eaten poop more than ten times. Almost a quarter of the dogs ate poop at least once.

This study focused solely on dogs who ate their own poop (known as autocoprophagia) or another dog’s poop. However, canines have been known to ingest the stool of other animals, too. Do not underestimate a dog’s palate!

Notably, the dogs in the UC-Davis study spanned the gamut. A canine’s sex, age, neuter status or existing behavior conditions did not predict whether or not he would snack on stool. The closest Dr. Hart’s team came to a correlation was their observation that 51 percent of coprophagic dogs were also “greedy eaters,” ate quickly or begged at the table often.

On the flip side, Scientific American says a 2010 study published in the Journal of Applied Companion Animal Behavior found anxious dogs and neutered males ate poop more often. Interestingly, both studies claim canines living with other canines were more likely to consume feces than those in single-dog households, indicating coprophagy may stem from a pack instinct domestic dogs inherited from their ancestors.

Why is my puppy eating poop?

According to the above stool studies, puppies likely eat poop because their DNA tells them to. Dr. Michelle Burch, DVM, from Safe Hounds Pet Insurance says this practice may have started to ensure normal gastrointestinal tract development. “Since puppies are not born with bacteria in their intestinal tract, some scientists believe the [ingestion] of feces will help their body establish a typical healthy gut bacterium,” she says. Dog packs centuries ago may also have ingested droppings in and around their dens to prevent bacteria or parasites from working their way into food sources.

Dr. Burch adds your puppy may devour his own number two due to malnutrition or a poor diet. She notes puppies are more likely to develop nutritional deficiencies while eating homemade diets. Food bowls placed near litter boxes or the site of a recent accident could establish a connection between the scent of healthy food and the odor of stool, making it hard to distinguish what a meal should smell like.

Internal issues like enzyme deficiencies, parasites, diabetes or other illnesses could drive your dog to consume caca. If you witness your dog eating poop more than once (and definitely if it happens more than six times), take him to the vet to see if something internal is going on.

“Puppies who are anxious, stressed or have separation anxiety can also develop the habit of coprophagy,” says Dr. Burch. Poor mental health in dogs is linked to a lack of environmental enrichment or exercise. Anxiety disorders, isolation and boredom may result in destructive tendencies or a search for new experiences (like tasting turds) for excitement.

Your dog’s age could also be the link to his stool snacking. “Puppies explore their world with their mouths, often picking up objects to chew on,” says Purina Behavior Research Scientist, Dr. Ragen McGowan. “Unfortunately, sometimes this can include poop.”

Puppies may also learn this behavior from their mother. The American Kennel Club says mother dogs lick newborn pups to encourage healthy bowel movements. Afterwards, the moms frequently clean up after their kiddos by consuming their poo.

Should I be worried if my puppy eats poop?

Do not freak out if you catch your puppy eating poop. Consuming their own poop isn’t a huge cause for concern, though you may want to brush their teeth before they lick you (no one wants that bacteria on their face or hands).

“Eating poop is not typically toxic to dogs,” Dr. McGowan says. “The greater danger of pups eating other dogs's poop is potential exposure to parasites.”

Rather than worrying about what your dog has just eaten, spend your energy focusing on why your pup ate the poop. Parasites, nutritional deficiencies and other illnesses can be identified and treated by a vet. Behavior issues can be treated with compassionate training techniques and lifestyle changes.

How to stop your dog from eating poop

Understanding why your puppy eats poop is the first step to stopping it from happening. Dr. Michelle Lugones, DVM, a Veterinarian for Best Friends Animal Society, a no-kill animal sanctuary in Utah, advises hitting up your vet’s office first.

“Make sure there isn't an underlying medical cause for your puppy's coprophagia, such as gastrointestinal parasites, maldigestion or nutritional deficiencies,” Dr. Lugones says. There are supplements and prescription medications formulated to treat these issues. Your vet may recommend a new dog food or diet plan to fill gaps in nutrition. “Once your veterinarian has helped you rule out those causes, then you can focus on some behavioral changes you can do at home.”

These changes can include ensuring your puppy has enough daily play and exercise to burn their energy and combat boredom (at least an hour or two). Invest in interactive toys you can use with your dog, along with ones they can use themselves for entertainment.

Dr. Lugones recommends using positive reinforcement training with puppies, especially on jaunts around the neighborhood. “When you are taking them out on walks, keep them on their leash and as soon as they finish defecating, before they get a chance to turn around and eat their own poop, praise them and distract them by offering them a treat. In the meantime, you can scoop up their feces before they can get to it.”

Teach the command “drop it” early and use it often. If you spot your dog chomping on some feces, use this command. Increase the command’s effectiveness by giving your pup a treat after he poops and leaves the turd behind. He’ll associate pooping with a treat from you instead of eating waste.

Dr. Lugones adds, “If you're hitting a bump in the road, things aren't improving, or you want some professional guidance, consult with a certified trainer and veterinary behaviorist (a veterinarian who has completed a residency in behavior medicine and is board certified).”

When combating anxiety issues, Dr. McGowan says the key is minimizing opportunity. If there’s no poo around, there’s no poo to eat. Supplements like Calming Care could help to reduce puppy anxiety, lowering the chance of an accident and subsequent turd snack while you are away.

If you catch your dog in the act, Dr. McGowan recommends redirecting his attention to something more positive and then discreetly cleaning up the mess. Punishment or harsh tones are ineffective and could even increase your dog’s predilection for poop.

Make your dog’s current diet more appealing! Block his access to any litter boxes at home and move his food bowls away from litter zones. Avoid areas in dog parks where forgotten feces might linger.

Finally, check with your vet if it’s safe to administer a dietary deterrent. These are supplements formulated to make the taste of feces unappealing to dogs (because apparently it doesn’t taste bad enough already). All dogs in a multi-dog household will need to take the deterrent for optimal results.

5 Puppy Training Mistakes You Might Not Know You’re Making

family
by Jillian Quint
My Kids Ruined My Spotify Wrapped A *Little* Bit Less This Year
family
by Emma Singer
“It Wasn’t Me, I Swear!” Here’s What to Say When Your Kid Lies to You (and What Not to Do)
family
by Rachel Bowie
‘Jellyfish Parenting’ Is the New Tiger Mom-ing. We Say, Hell Yes! 
family
by Suzanne Zuckerman
Parenting Tweens Is *Supposed* to be Messy–This Advice Can Help
family
by Candace Davison
What You Should Know Before Attending Mickey’s Very Merry Christmas Party at Magic Kingdom
family
by Destinee Scott
Cat Owners, You Don't Want to Miss This Litter Robot Sale