On the cusp of Halloween, let’s celebrate orange cats! Like black cats, there’s not one single “orange cat breed” since coat color alone doesn’t count as a breed. In fact, many breeds come in a variety of orange, ginger and red hues. Orange coats can be long, short, striped (tabby or mackerel patterned), tortoiseshell or calico. And here’s another cool fact for you: If you’ve ever met a fully orange cat, chances are it was male. Allow us to explain.

We’ll make this quick because genetics are complicated. Basically, the gene responsible for orange and red coat color is found on the X chromosome and comes in two versions: dominant (O) and recessive (o). The dominant O gene will produce orange coloration; the recessive o gene will not. Female cats have two X chromosomes, which means two chances to inherit orange hues. Basepaws, maker of cat DNA tests that tell you about your cat’s genetic markers, says female felines are more likely to be calico or tortoiseshell because there are more gene combinations available to them through their X chromosomes (O/O, o/o, O/o, o/O). Male cats on the other hand, are rarely calico or tortoiseshell because they only have that one X chromosome. If they get an O version, they’re orange. If they get an o version, they’ll be a different color.

Genetics are also the reason a majority of cats with orange-only coats are male. It’s rare to see a female orange-all-over cat (for this to happen, she would need an orange or red father and a mother with some orange coloring). The Cat Fanciers Association also notes that orange male cats must come from mothers with orange, calico or tortoiseshell coloring.

The patterns most often associated with orange hues on cats are calico, tortoiseshell and tabby. Calico simply means multi-colored, and often presents with shades of white, brown and orange. (Some cats are bi-colored, which just means only two colors are identifiable.) Tortoiseshell refers to the black and orange swirls you see on some cats. Again, that’s a combination of the dominant O and recessive o genes working in tandem. Finally, tabby is pretty much any striped pattern. Tabby cats typically have tiger-like stripes with specific markings on their face (like an “M” shape on their forehead) and rings around their legs and tail.

Now that we’ve gotten the science out of the way, let’s get to some orange cat breeds! 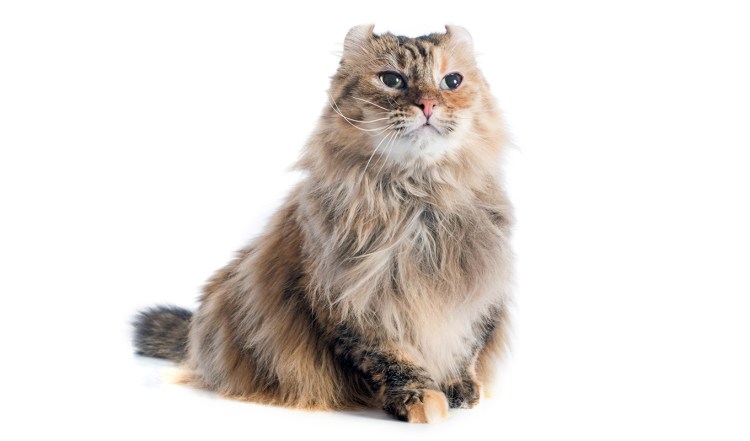 Known for their outgoing personalities and adaptability, American Curl cats are identifiable by their curly-cue ears. A few days after being born, their ears slowly begin curling backwards. These kitties can be tortoiseshell, calico, red, orange and gold. 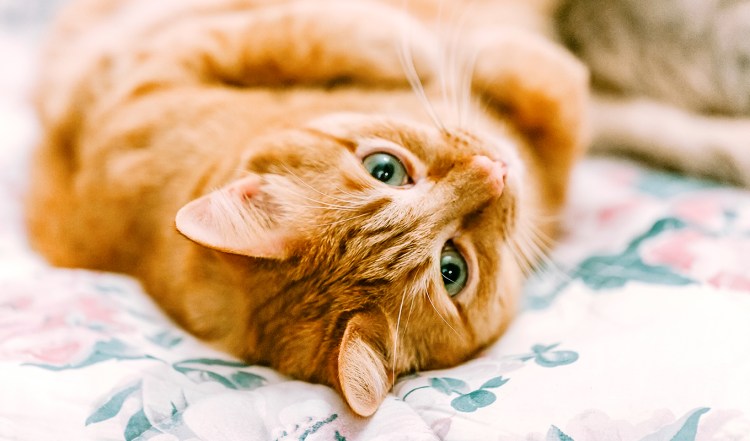 Known as working cats and thought to have arrived in the U.S. via the Mayflower, American Shorthairs are excellent family pets. You can find them in calico and tortoiseshell patterns. When they’ve got a tabby pattern, chances are their stripes will be thick. 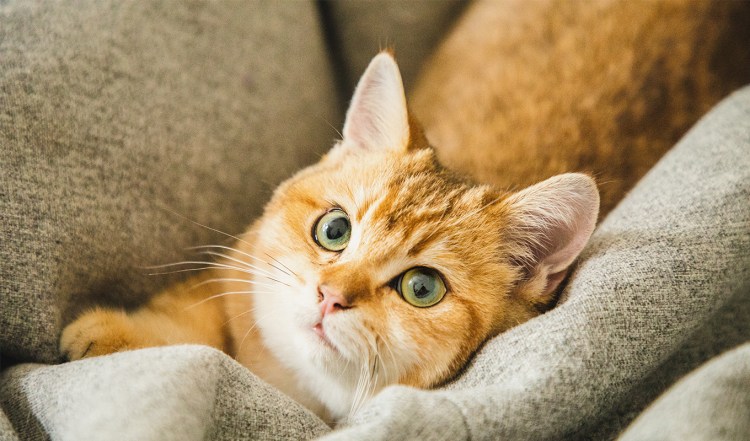 British Shorthairs are always down for a relaxing afternoon cup of tea (you sip the tea, they’ll lounge). These sweet, quiet cats have thick, dense coats that can come in calico or golden tabby patterns. Yes, they’re definitely known for their silver gray coats, but that doesn’t mean you’ll never meet an orange British Shorthair. 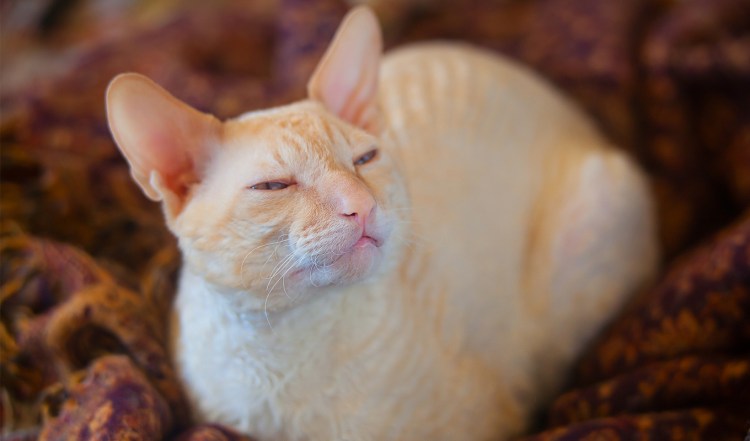 Say hello to a cat breed with short, curly fur! These goofballs like to play and don’t enjoy being left out. They can appear in tabby, calico or tortoiseshell patterns. Cornish Rex cats also have very distinct ears and cheekbones, which adds to their alert and eager personality. 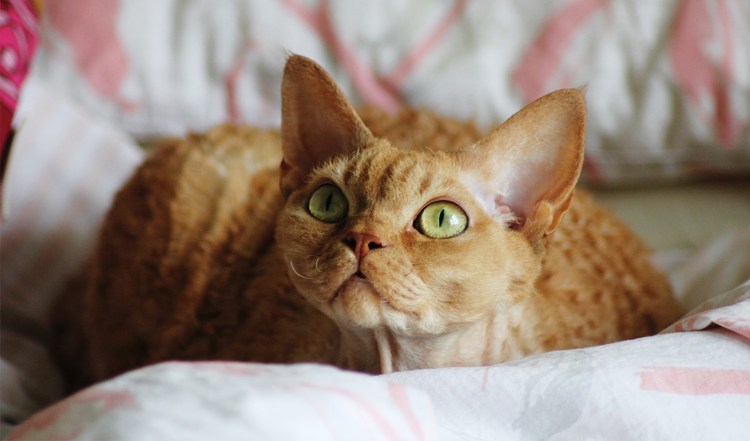 Some Devon Rex cats may look like curmudgeons, but these are loving, social creatures who just want to have fun. Try challenging their minds by training them to do tricks! Their coats range from curly to wavy and can change texture over their lifetimes. 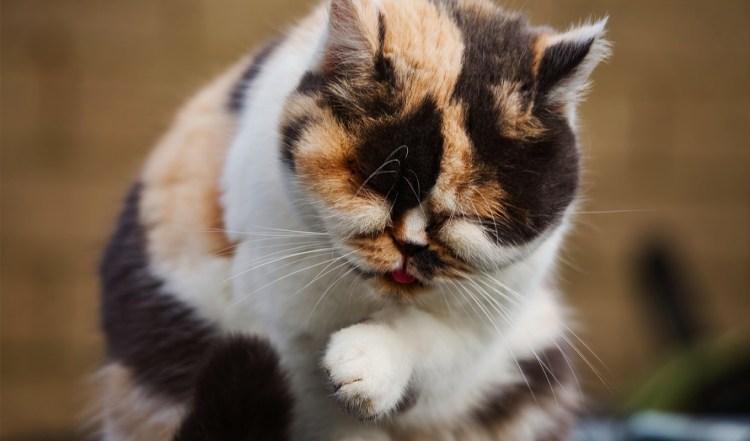 Exotic Shorthairs were bred from Persian cats specifically to have shorter, denser coats. They need less brushing but just as much cuddling as the Persian. You can find them in tortoiseshell, calico and tabby patterns with hues of red, gold and orange. 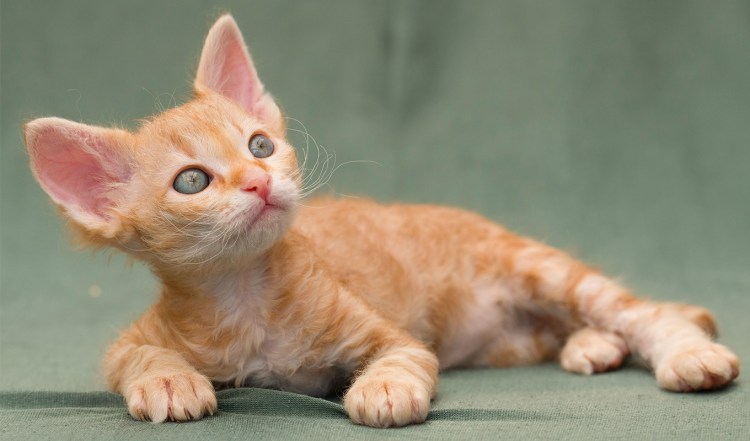 As their name suggests, LaPerm cats have very curly coats! Some are born with straight fur or no fur that grows in later or develops into curls. No matter their style, you can definitely find them in bright hues of orange and red. They love to love you so make plenty of time for play and bonding. 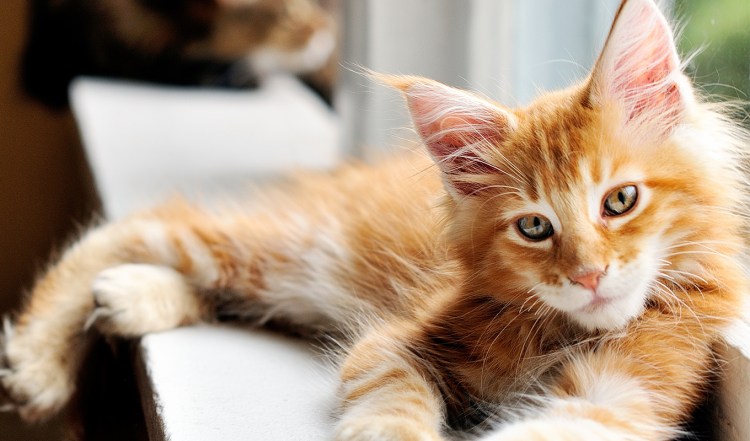 One of the largest cat breeds, the Maine Coon is also one of the friendliest. Their lengthy coats (whether deep red or bright orange) keep them warm in the wintertime (whether they want to go outside is up for debate). These gentle giants also can come in calico. 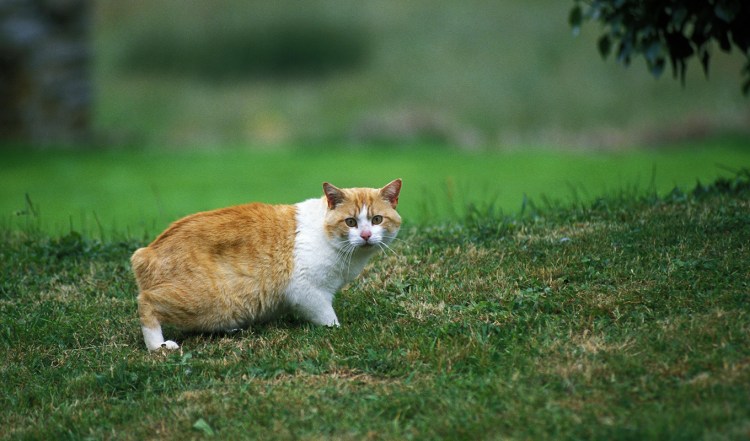 Manx cats are balls of joy, which is appropriate because they have tiny, rounded bobtails! These working cats come from the Isle of Man and are incredibly loyal companions. Manx cats can come in orange, red, calico, tortoiseshell and tabby colors and patterns. 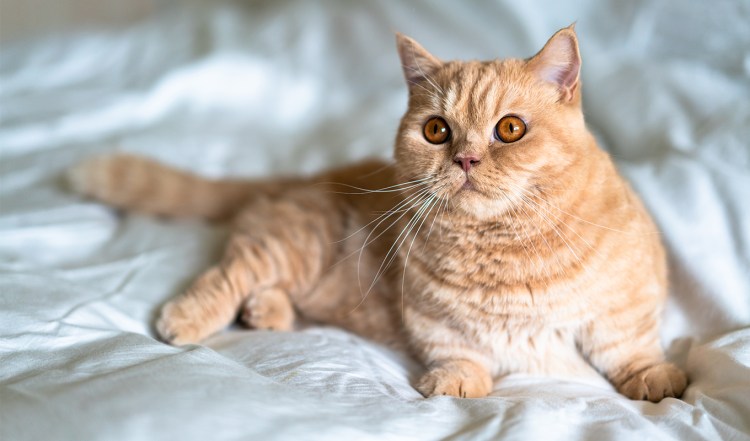 Look at these tiny cats! They are bred specifically to have shorter legs, which means less climbing but just as much play. Affectionate and energetic, Munchkins are rare and are named after the Munchkins in The Wizard of Oz. Just about any orange variation is possible in a Manx, including calico and tortoiseshell. 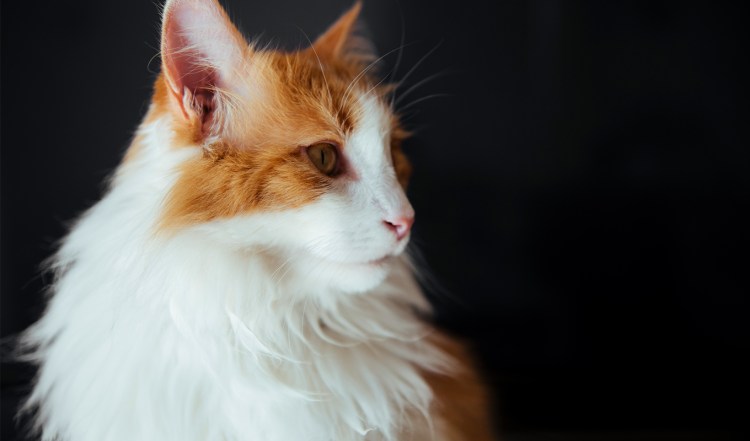 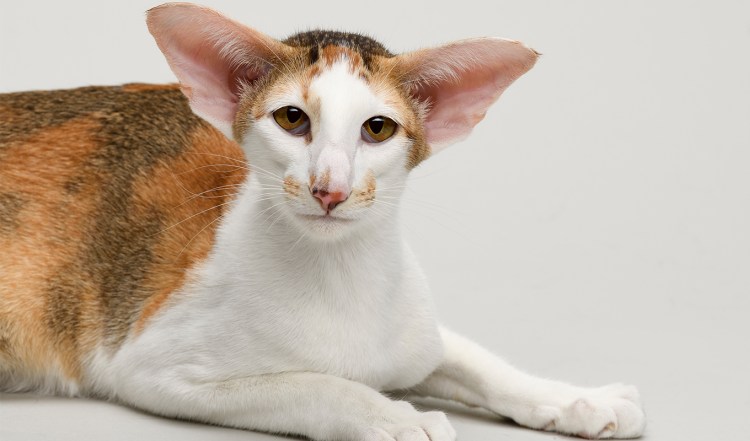 According to the CFA, “The Oriental was developed to explore all the possibilities of color and pattern.” So, yeah, they come in orange. Aside from their incredible coat color and pattern range, these sweethearts are excellent companion animals. They’ll find any way to be near you—even if you’re in the middle of making them dinner. 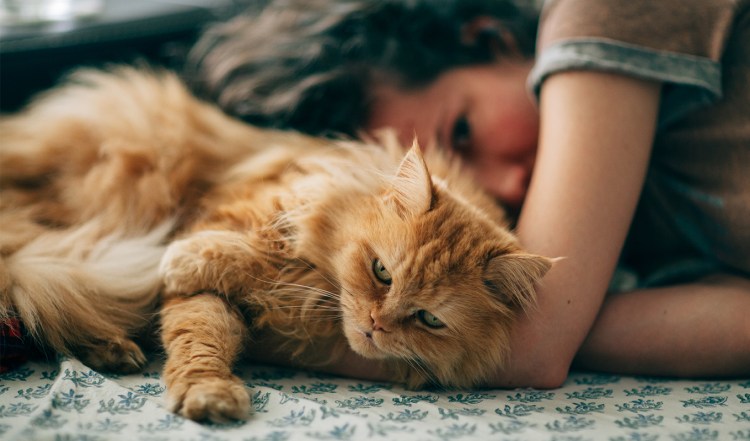 One of the most distinctive features of the Persian cat is their long, thick, groom-intensive coat. Get ready to brush and make sure they’re free of tangles. Sweet and loving, these kitties can have tabby, calico and even tortoiseshell patterns. 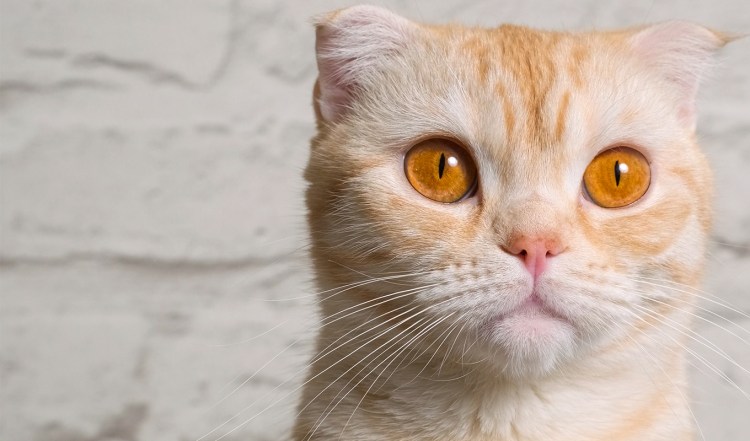 Another fun gene cats can have: the folded ear gene! It probably has a more scientific name, but Scottish Folds carry it and their ears fold down a few weeks after they’re born. Scottish Fold coats can be long or short and can be red, gold, orange, tortoiseshell, calico or tabby. 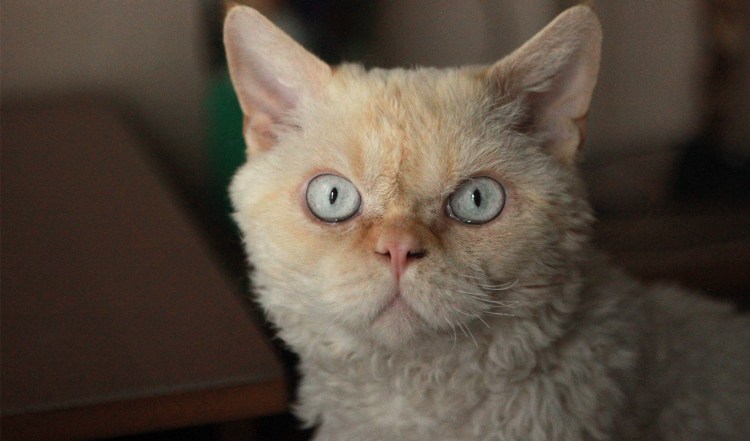 Another curly coated cat? You bet. Not only does their fur grow in waves or curls, but they can also be deep red, golden orange or even light orange, like a creamsicle. Friendly and easy-going, Selkirk Rex cats are excellent family pets.