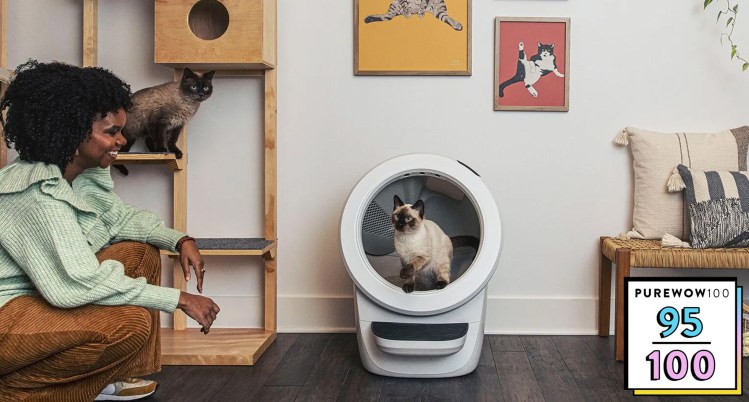 Since the Litter-Robot 3 Connect changed my life, I was ecstatic to try Whisker’s newest model, the Litter-Robot 4. Just like the original, the updated version is an automatic self-cleaning litter box that connects to WiFi. My two cats have happily used their first Litter-Robot since December 2021. Even though they were comfortable with it, I worried switching things up might disrupt their routine. But here we are, a few weeks in, and they are using the Litter-Robot 4 regularly. How do I know? Because the Whisker app tells me any time there’s some action, which I love— and I’ll tell you why.

Litter-Robots automatically scoop cat poop for you. To do this, they rotate and drop any clumps into a waste bin in the bottom of the machine. Not only does this self-cleaning litter box save you the hassle of scooping, it cuts back on litter use, litter dust and litter smell. It also has an app that sends updates and allows you to monitor the box from afar.

I set up the Litter-Robot 4 one night when I was home to ensure a smooth transition between models. Please make sure your cats aren’t around during the bot’s first cycle! This absolutely freaked out my cats with Litter-Robot 3 and can destroy their sense of safety around litter boxes in general. Luckily, my babies are curious and gave it a go once they got used to the noise.

Worried they might hate the new machine, I was thrilled to see cycle notifications pop up on my phone the next day while at work. Not only did I know my cats were using the Litter-Robot 4, but I got some great intel. This model tells you how much your cat weighs (Jacques will need to go on a diet because I now know he is two pounds heavier than his vet would like!), how full the waste drawer is and how high the litter level reaches. Dubbed SmartScale™ technology and OmniSense™ Detection respectively, these features are so helpful to those of us back in offices with less time to monitor our litter box status. Right now, my waste drawer is 60-percent full, and my litter level is low, so I know I need to add more as soon as I get home.

While Whisker’s individual cat recognition technology won’t be available until later this year, I still know both of my cats use the Litter-Robot 4 based on the SmartScale™ technology. Foxy is four pounds lighter than Jacques and each weight shows up in the activity history. If they weighed the same, I probably wouldn’t be able to tell who was using it when. But now I have evidence that this is Jacques’ preferred method for potty breaks; Foxy is more of a traditional litter box girl as she’s only used the robot once in the past week. This is good data I can use to better understand my cat’s needs!

It’s also worth noting you should check out what’s in the waste drawer every day. Even if you’re not scooping, you need to know what’s going on with your cat’s poop and pee. Dog owners literally pick up dog poop. We can at least check in on our cat’s poop to note whether they’re having healthy bowel movements.

The Litter-Robot 4’s QuietSift™ technology is said to be “near-silent,” and I fully vouch for that description. The first time the robot cycled I wondered if it was working because it was so sneaky quiet! We used to be able to hear it humming from down the hall, and now I don’t know the cats have used it until I get the notification. This will be especially good news for folks with cats who spook easily at loud noises.

Beyond the reduced decibel level, the weight sensors are more sensitive to kitty paws—at least it seems that way to me. The Litter-Robot 3 Connect definitely has a SafeCat system that prevents cycling while a cat is in the box. But the Litter-Robot 4 seems to sense even a slight paw on the step and stops any action to prevent injuring or scaring cats.

Whisker says both models weigh the same and have the same depth. To me, this new model feels significantly smaller—in a good way. It doesn’t look as bulky, and the design is much sleeker. The Litter-Robot 4 is a few inches narrower, though the entrance for kitties is way larger, almost 16” x 16”, a full five inches wider than the previous version. Not only that, but the step is slightly lower to the ground and the box entrance itself is about an inch lower, making it easier for cats to climb in.

The waste drawer is also larger and better contains smells. Again, at first glance this fooled me. Because the unit’s base is designed to take up less space (yay!), the waste drawer looks smaller (why?). Au contraire! The drawer holds just as much as before because it’s deeper. Whisker offers an add-on OdorTrap™ System pod that can help reduce any stinky scents, though we’ve had no issues with smells thus far.

Another huge design improvement? The buttons are on the top of the bot instead of at eye (and nose) level with the litter. Instead of squatting down to hit reset after cleaning the waste drawer, I just lean in a bit (if you’re 6’7” this doesn’t matter much, but it does to me!). I also love how the button panel lights up to indicate what’s going on with the machine. Is the drawer full? Flashing blue light. Is there a cat inside? Red light. Did I successfully put it into sleep mode? Purple light (yes).

Set-up Is a Cinch

The quick-start guide was all I needed to get the Litter-Robot 4 up and running in about 10 minutes. (Huge tip: Plug the adapter into the back of the machine before positioning it and pouring litter into it.) I consider myself a semi-tech literate human being and the instructions were intuitive and easy to follow.

No Litter Box Is Perfect

The thing about cats is you’ll always have to deal with litter. You may not need to scoop the Litter-Robot 4, but you’ll have to empty the drawer and check out its contents. While this machine’s fence step is designed to trap litter, and it does, there’s still litter pellets around the box area. (Note: I have not switched over to Whisker’s low dust, low tracking litter yet. I didn’t want to disrupt two elements of my cats’ routines in a single day.)

This is still a very pricey piece of hardware. Yes, it ships free and you have a 90-day in-home trial period—and I’ll say over time, we definitely save on how much clumping litter we buy. But it’s expensive. Compared to other robotic litter boxes though? I think that price is worth it.

Finally, if your cat doesn’t like it, it doesn’t matter how much you like it. Your goal is to provide a happy, healthy home for your feline family member and that includes a litter box they’ll use and feel safe in. So read their reactions. If after a couple weeks they refuse to use it or have begun peeing outside the box consistently, it might not be the right choice for you.

P.S. Right now, the site says these ship in seven to nine weeks. If you’re thinking of gifting one for the holidays, don’t wait to order!

family
by Emma Singer
63 Winter Activities to Banish the Cold Weather Blues 
family
by Brianna Lapolla
The 25 Best Stocking Stuffers for Teens, According to Actual Teens
family
by Chelsea Candelario
How to Celebrate Kwanzaa This Year
family
by Abby Hepworth
27 Gifts for Cat Lovers (and Their Feline Friends)
family
Sponsored
Soccer World Champion Allie Long Has a Podcast Called ‘Mom Goals,’ and It's Our New Must-Listen
family
by Jillian Quint
My Kids Ruined My Spotify Wrapped A *Little* Bit Less This Year