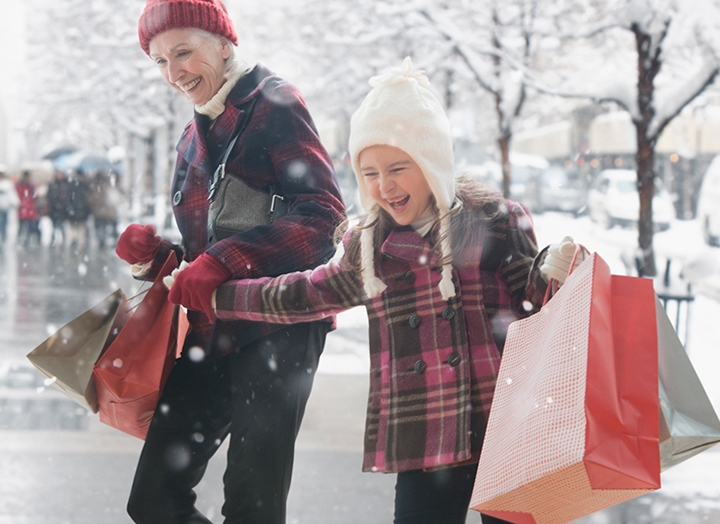 ‘Tis the season…to watch your children’s eyes glaze over as they drown in enough plastic crap to give a Montessori teacher a panic attack. Between Black Friday and New Year’s Day, kids face an overstimulating onslaught of gifts they don’t need. And, according to our reporting, key contributors to this tidal wave of presents are grandparents.

“The messaging around grandparenting is, ‘Oh my gosh, I can’t wait to spoil them!’” says California grandmother DeeDee Moore, founder of the Instagram account MoreThanGrand. “There’s this idea that being a grandparent means you get to go on these shopping sprees and buy and feed your grandchildren anything they want. That message is so pervasive, yet it’s detrimental both to the kids and to your relationship with their parents.” Moore devotes significant effort toward reprogramming grandparents in order to improve relationships around what she calls, “such a big issue.” For some grandparents, shopping for grandkids is a primary hobby. “But it’s not actually great for kids. And it’s not what most parents want.”

Take the case of Allison, a mom of two elementary schoolers:  "My mother-in-law, who does not feel sufficiently included in our lives, tries to make her presence felt by buying the physically largest gifts she can get her hands on. These have included a trampoline when we lived with toddlers in a small NYC apartment and, most recently, both a puppet theater and an 'ice cream cart' for Christmas.”

Let’s be clear: We are not here to bash grandparents in a pandemic. As two years of relative isolation have taught us, grandparent relationships are more vital than ever. Kids need their grandparents. And overwhelmed parents are downright desperate for help. What no one needs is more clutter. And yet, intergenerational over-gifting remains an almost universal source of agita for families. It’s an emotional challenge, because for grandparents, these gifts are a sort of proxy for love. That Frozen II castle represents what grandma truly seeks to pass down, which is her love and a sense of connection. So to a grandparent, the rejection of a toy feels like the rejection of something deeper.

Michelle, a mom from New York, struggles to communicate with her in-laws around this topic. She feels powerless to address their “generosity,” afraid to seem ungrateful. And yet, seeing her child deluged with toys undermines the values of environmental awareness, minimalism and gratitude she hopes to teach him. "My mother-in-law does not think it's Christmas unless everyone opens a zillion boxes,” Michelle says. “It drives my husband and me nuts! But we never know what to say or do about it.

Here are some out-of-the-box expert ideas:

“Grandparents are very receptive to helping their grandchild have an amazing life,” says Moore. “They will take that direction if it’s presented in a loving way.” She advises parents initiate conversations and clarify their expectations around gift giving before the holidays become a source of resentment. “Be proactive. Agree in advance on a budget or a limit on gifts,” says Moore. “Parents can broach the subject as something they want to come to an agreement around, not rules they’re laying down.” Grandparents should also try to find out what it is that parents truly want and need. Maybe it’s evening babysitting time. Maybe it’s taking their grandchildren to a batting cage or ballet performance. Perhaps it’s after-school homework help or Zoom cooking lessons. “It’s a hard shift, going from being the parent of an adult child to being the parent of a parent,” says Moore. “We need help learning how to do that. And parents are the best people to teach us.”

To grandparents who love to shop, Moore advises: “There are so many kids out there who do not have indulgent grandparents. Don’t limit your generosity to your own grandchildren. Buy things for kids in need! Donate those irresistible baby clothes to them.”

Keep the focus on the kids

Hard truth alert: “Grandparents really don’t care whether you want more toys in your apartment,” says Moore. “But they do care if it is negatively affecting the child because they’re becoming overwhelmed by the number of toys. Or because you’re having to put limits on things so that they do their homework. I think if you approach it from the perspective of how it’s affecting the child, that is more likely to be effective.

Byrne advises grandparents buy themselves the same gift they’re shipping to their grandchildren. Then grandma and grandson can Facetime and build the same Lego set “together.” Ask grandparents to purchase a gift card to a local ice cream shop. Then, when the grandparents come to visit, the child can “buy” ice cream for them. Make grandparents aware of their grandkids’ latest interests and passions. Then they can contribute to sports or art lessons. “My nephew was fascinated by The Titanic so my dad bought him a book about it, and they would talk about and bond over it,” says Byrne.

Suggest grandparents select an heirloom or create a project-based gift. They might put together a photo album of all the cousins, or a scrapbook of summer trips over the years. “Grandparents are the connector of generations,” says Byrne. “Write a really special letter to your grandchild every Christmas. Include your perceptions as a grandparent, how you love watching them grow. That’s a letter they’ll have forever. Maybe the 10-year-old is not going to jump up and down over it now, but when they’re 18, they will. That’s what grandchildren who are adults always say. They wish they had more time with their grandparents. They wish they knew more about them. And sometimes it’s too late.”

These approaches have yielded positive real-world results. “My parents were recently asking for gift ideas for the kids, and I suggested an experience, particularly post-Covid, when they haven’t seen much of each other in person,” says Ruth, a mom of two from CT. “They ended up splurging on tickets to see Aladdin on Broadway.” Making memories. Cementing legacies. We can’t think of a greater gift.

family
by PureWow Editors
The Best Dog Clothes for Large Dogs, Because Even the Biggest Pups Need to Feel Cozy
family
by Abby Hepworth
The 66 Best Gifts for Dad That He'll Actually Use (& Won't Abandon in the Garage)
family
by Emma Singer
The 24 Best Spring Break Destinations for Families
family
by Dara Katz
It’s Super Subtle, But Psychologists Really Want Divorced Parents to Stop Saying *This* to Their Children
family
by Emma Singer
29 Birthday Party Games for Kids to Get the Party Started (And Keep It Going)
family
by Greta Heggeness
Here Are the Most Popular Girl & Boy Dog Names of 2022