Where Is ‘The Handmaid’s Tale’ Filmed? Plus 5 Other Facts About the Show

We’ve been following June’s (Elizabeth Moss) journey for three whole seasons of The Handmaid’s Tale. And now that we have somewhat of an idea as to when we can expect season four to air, we’re full of questions. For example, what will happen in season four? And where is The Handmaid’s Tale filmed? Keep reading to find out and to learn more about the series. 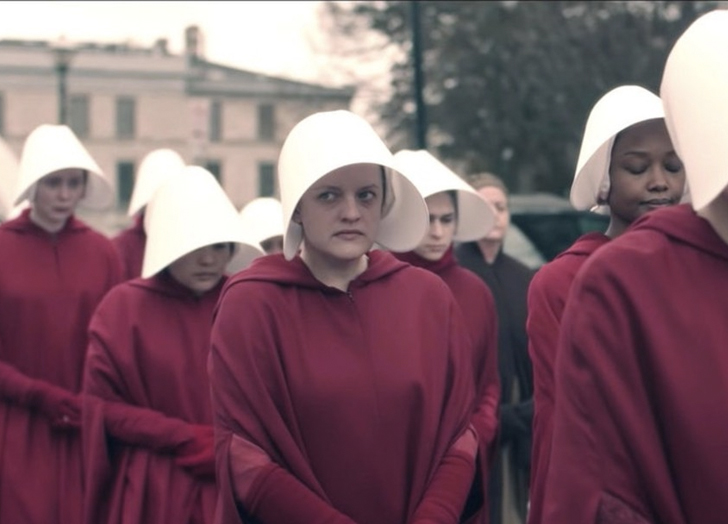 1. Where is The Handmaid’s Tale filmed?

Surprisingly, the hit series is filmed in different parts of Canada. The majority of the show is shot in Toronto. One of the main shooting locations is Toronto City Hall (you’ll recognize the building as the one blown up by the Handmaidens). According to iNews UK, the Church of St Aidan is used as The Red Centre, where the handmaids are trained, while a banquet scene in season one where the children of Gilead are paraded was filmed in the Fairmount Royal York Hotel.

Other portions are filmed in Hamilton, Ontario, including the house where Offred (Moss) is stationed with Commander Waterford (Joseph Fiennes) and his wife Serena (Yvonne Strahovski). Some of the most difficult scenes to watch, including where the bodies of dissidents hang on a brick wall, are shot in the neighboring towns of Cambridge and Galt.

2. What is The Handmaid’s Tale about?

Based on the 1985 novel of the same name by Margaret Atwood, The Handmaid's Tale is set in the dystopian world of Gilead where the U.S. government has been overthrown by religious Christian fundamentalists years after widespread infertility sweeps across the globe. The story follows June and the other handmaidens, who are kidnapped and forced to bear children by and for the ruling classes who are unable to have children of their own.

Fortunately, Gilead is fictional. However, the community is actually set in what used to be Boston, Massachusetts. And, as we found out while doing some research, there is actually a real place named Gilead—a mountainous region east of the Jordan River, situated in modern-day Jordan. Who knew?

4. When will the next season of The Handmaid’s Tale be on Hulu?

The new season of The Handmaid's Tale—which will feature ten episodes—was delayed due to the coronavirus pandemic and will now debut in 2021.

5. What is season four about?

The streaming platform dropped the season’s first trailer over the summer, and according to June Osborn (Moss) the battle in Gilead is “just getting started.” The teaser, which features both old and never-before-seen footage, picks up where season three left off, when the former handmaid led a rebellion to rescue the children of Gilead. (If you remember, the finale ended with June being carried away by her fellow handmaids after she had been shot).

And it seems like there are going to be a lot of twists this time around. “You don’t want to be setting up season 4 in season 3. Audiences smell that coming,” showrunner Bruce Miller previously said to EW. “So what I do is completely screw myself at the end of the season. Then you think, 'Oh, there’s a whole bunch of smart writers who will come in next season and solve that problem.'”

﻿It’s clear we’ve got some time before the new season starts streaming. So, in the meantime, we recommend binging a few other series with similar themes (or that star Moss), including Black Mirror, the Leftovers, the Man in the High Castle, Mad Men, Dead to Me and The OA.

RELATED Looking for Shows like ‘Sweet Magnolias’? These 8 Are Just as Binge-worthy