Today marks the 25th anniversary of Princess Diana's untimely death. And not surprisingly, her enduring legacy continues to live on through her sons, thanks to their philanthropic efforts. However, Prince William and Prince Harry aren’t the only ones who are following in her footsteps.

Kate Middleton, Duchess of Cambridge, has also honored the late royal on plenty of occasions, from her Princess Di-inspired outfits to her jewelry choices. And according to body language experts, the Duchess of Cambridge has quite a bit in common with Princess Diana in terms of character traits and behavior in public. Keep reading to see all the times Middleton has mirrored her late mother-in-law. 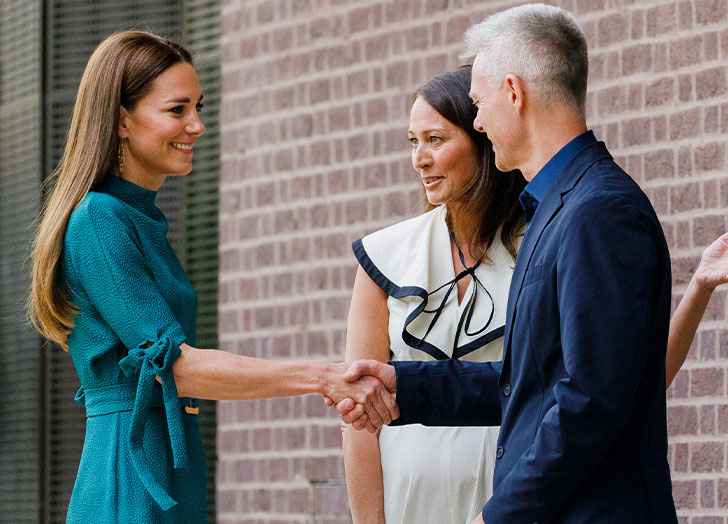 Body language expert Darren Stanton observed Middleton at the British Fashion Council. Not only did she seem “confident,” but she also showed similarities to Princess Diana.

“When she was seen interacting with others attending the awards, Kate Middleton looked clearly enthralled and excited by those exchanges,” he said on behalf of Betfair Casino. “She doesn’t lack confidence when Prince William or other senior royals aren’t by her side, she is completely within her comfort zone, and this is why we consistently see her displaying a genuine affection and building a deep rapport with those she is interacting with. She shows a genuine willingness to learn about others that cannot be faked, much like Princess Diana did—what you see is very much what you get with Kate Middleton.”

He continued, “It’s clear that Kate Middleton is one of the most popular members of the senior royal family now, who is able to connect with those from all walks of life and ages because of her sincerity and genuineness. It’s easy to see the similarities between Kate Middleton and Princess Diana and we haven’t seen a member of the royal family emulate or encapsulate the popularity and empathy that Princess Diana had as Kate Middleton has done in recent years.” 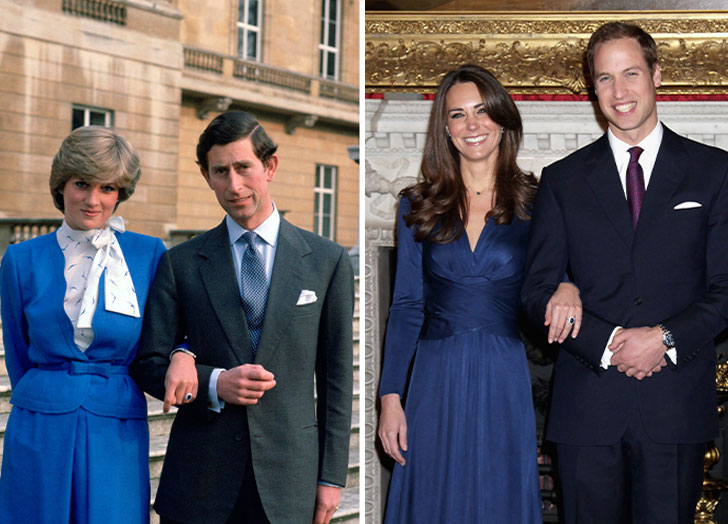 After looking back at the duchess’s early days as a royal, Stanton noted that her behavior during public appearances was very similar to Princess Diana’s.

On behalf of Slingo, he explained, “Kate Middleton was arguably more reserved when she was first thrown into the spotlight several years ago. She behaved in a similar way Princess Diana did when she first got engaged to Prince Charles. Kate Middleton would always stay very close to Prince William and continuously look towards him to seek his approval and reassurance.”

Stanton also explained that the royal has since grown more confident, showing the same genuine kindness and openness that Princess Diana was known for. He said, “Kate Middleton also used to position her hands in front of her—another self-reassuring gesture which signifies feelings of anxiousness. However, these days, she is seen making what is known as open palm gestures instead—doing so signifies not only confidence, but openness, genuinity and honesty. The difference in how she holds her hands during engagements suggest that she has grown into the large shoes that come with being an established member of the royal family.” 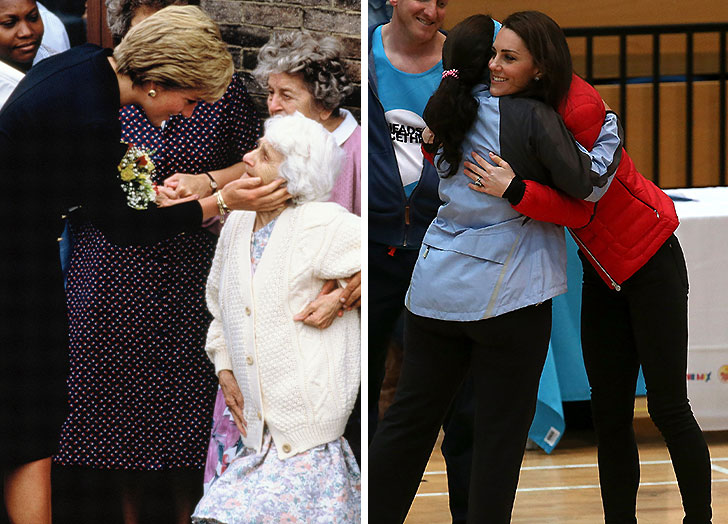 It’s no secret that the duchess radiates warmth and positivity when she attends public events. Stanton (on behalf of Be My Bet) explained how Middleton’s body language increasingly mirrors that of Princess Diana.

“The one thing about Kate Middleton that noticeably hasn’t changed over the years is that she is a very genuine person,” Stanton said. “Other public figures, like celebrities and even other royal family members, can tend to show a fake smile or disingenuous displays of emotion at certain events. However, Kate Middleton is very much an open book.”

He continued, “Not only has Kate Middleton shown a willingness to interact with everyday people when attending public events—no other royal has interacted with the public as much as Prince William and Kate Middleton since Princess Diana—but she also displays the same level of true empathy and sympathy as Princess Diana did. She’s not afraid to display her emotions, whether it be when she’s meeting with children, visiting those in hospital or connecting with members of the public around the world. She is happy to be an emotional support to others and it’s clear she truly cares.” 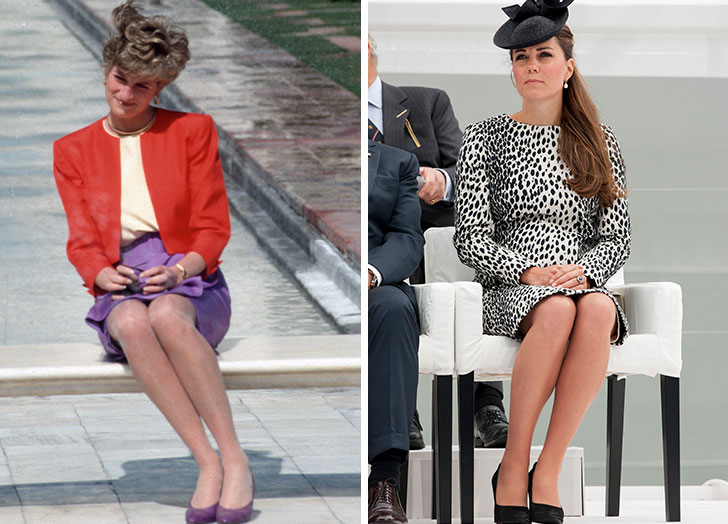 If you take a close look at photos where the duchess is seated, you’ll notice that she keeps her knees and ankles together while tilting them to the side. As it turns out, Princess Diana adopted the same pose in a few of her photos, known as the Duchess Slant.

"Typically, 'the Duchess Slant' is used when a lady has to sit for an extended amount of time while keeping poise and posture," said Myka Meier, director of Beaumont Etiquette, per People. "It is the perfect pose for when a camera is shooting directly in front of you because by slightly slanting the knees...your legs are angled so that the camera only shoots the sides of your legs and protects your modesty." 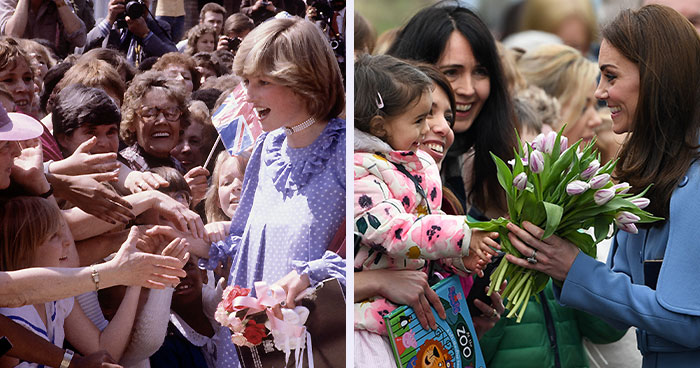 During the royal tour of the Caribbean, Stanton observed that the duchess has a natural tendency to connect and bond with people, which he found very similar to Princess Diana’s approach.

“When she speaks to people she nails down at their eye-level to build rapport and has no problems getting close, hugging people,” Stanton told Express. “Her enjoyment and happiness are all genuine signs and emotion, so it’s clear the couple have been having lots of fun going out interacting with members of the public and other civil dignitaries.” 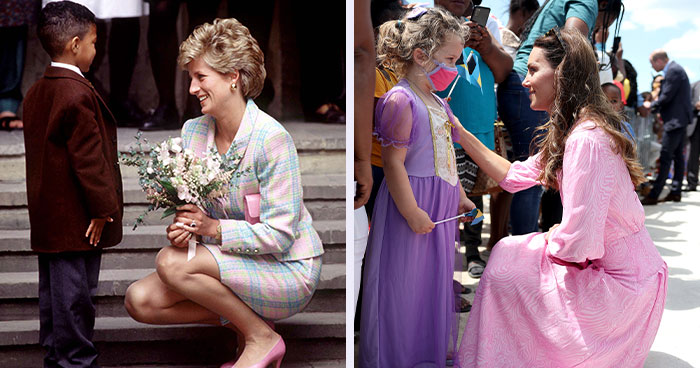 It should come as no surprise that Princess Di has influenced how Middleton interacts with children. One of Middleton’s go-to parenting moves involves bending down to meet her kids at eye-level—but she wasn’t the first royal to use this method. As you can see in this photo of Princess Diana, she frequently crouched down to speak to little kids to avoid asserting dominance.

Susan Constantine, a human behavioral expert, explained to The Royal UK, “This is a way for them to refrain from being authoritative and, in turn, better relate to their children.”