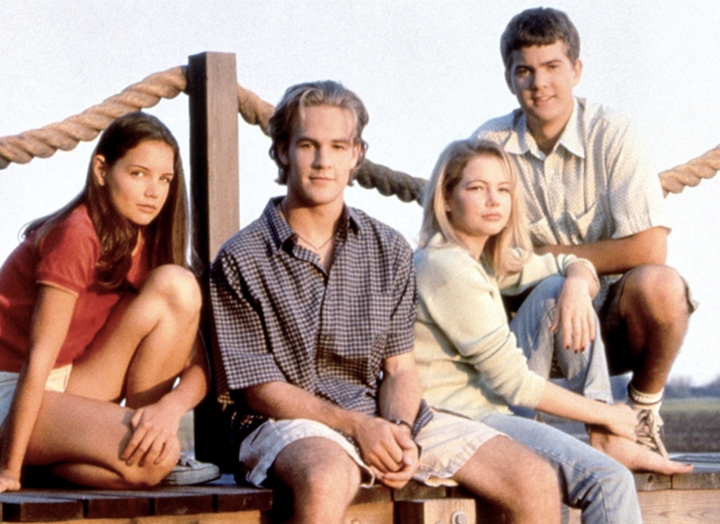 Before I get started on this, I am going to be totally transparent. I am fully aware that I am about twenty years late to this Dawson’s Creek review. However, in my defense, when the hit WB show premiered on Tuesday, January 20, 1998 (which raked in a record-setting 6.8 million views), I hadn’t even reached my fifth birthday. So, forgive me for being late to the game.

When I first noticed that Netflix added the drama series to its November lineup, my reaction was simple: Meh. I already knew that it was where Katie Holmes got her big break and that it took place on some creek in some small town. What else did I need to know? Well, after bingeing my way through the first five seasons and starting on the sixth (that is, 128 45-minute long episodes), apparently, a lot.

I began season one late on a Monday night after I had caught up on the most recent episode of The Great British Baking Show (see my thoughts on that one, here). And since then, the voices of Dawson Leery (James Van Der Beek), Joey Potter (Holmes), Pacey Witter (Joshua Jackson) and Jen Lindley (Michelle Williams) have provided the background noise to the last two weeks of my life.

I went into episode one expecting to get 90210, Seventh Heaven and Saved by the Bell vibes. And while I wasn’t too far off, Dawson’s Creek is not exactly what I anticipated. The adolescent, angst-filled drama, which began much like old-fashioned teen love stories prominent during the ’80s and early ’90s, seemed to take an unexpected turn around season three and focused on a new kind of romance—a love triangle.

To be honest, it threw me for a loop. I thought I was going to be witnessing Dawson fawning over his longtime pal Joey over the course of six seasons, but then the drama really took shape. And it wasn’t just the angsty dramatics that drew me in. It was the change I saw in Joey, who seemingly went from a quiet soft-spoken girl following her crush around like a sad puppy dog to an independent young woman making decisions about relationships on her own. Sure, she had plenty of weak moments (haven’t we all), but, Joey Potter seemed to outgrow not only girls in her high school but across teen-drama series of that time altogether.

Not to mention, the Joey-Dawson-Pacey love triangle is probably the only love triangle in history so well-executed that it’s able to last almost an entire three seasons. My only complaint? Season two was pretty much a snore-fest and I probably couldn’t tell you much that happened during it. Yet, as I make my way through season six, I still find myself completely unaware of how this thing will end. But I’m sure as hell looking forward to it.

17 of the Best British Shows on Netflix Right Now