I don’t know about you, but I could watch Pretty in Pink, She’s All That, and 10 Things I Hate About You on a loop. These movies are classics in their own right. But, they all have one thing in common: the narrative centers around two straight white leads.

Lately, we’ve been seeing more diverse and gender-inclusive stories in the media. Just look at movies like Love, Simon, The Sun Is Also A Star and Crazy Rich Asians. But, when was the last time you saw a Gen-Z love story where a Black ﻿trans teenager was the central focus?

Billy Porter officially made his ​​directorial debut with the new Prime Video film, Anything’s Possible. The story follows Kelsa (Eva Reign), a confident high school girl who is trans, who meets and falls in love with her classmate, Khal (Abubakr Ali). What comes next is a beautiful love story filled with joy, acceptance and heartbreak. Keep reading to learn more about my honest thoughts on Anything’s Possible.

The movie starts with Kelsa filming a new video for her YouTube channel. Her channel acts as her personal diary, where she can talk about anything from her love for animals to simply being trans. In her latest entry, she is talking about the unique characteristics that animals possess.

Her fascination with animals may be a huge part of her future (she dreams of becoming a nature cinematographer), but that very concept plays into the central theme of the film: survival. Kelsa admires how animals have a distinct quality that helps them survive. She has been called “brave” all of her life. But, Kelsa doesn’t want to be just known for her fearless attitude—she wants everyone to see her for who she is, beyond just being trans.

The story paints Kelsa as a typical teenage girl. Aside from her love for animals, she’s a total fashionista. Like her wardrobe, she has a bright and colorful personality. In addition, she has a close relationship with her mother (played by Renée Elise Goldsberry) and has two BFFs she can always count on.

Kelsa’s main focus is surviving thriving in her senior year of high school, while also trying to get into college (either in New York or California). Having a boyfriend is the last thing on her mind. Still, that hasn’t stopped her from having a massive crush on her classmate, Khal. 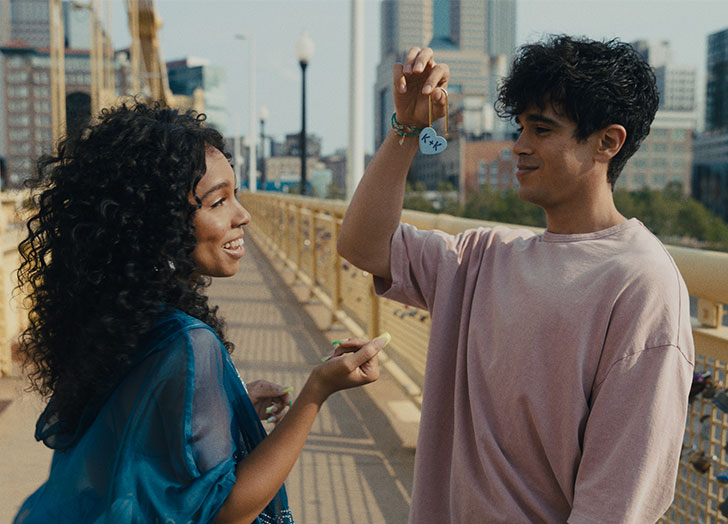 On the first day of art class, they partner up and must paint portraits of one another. Instantly, sparks begin to fly between the two and that’s where it all starts. Though they are complete opposites, their chemistry is undeniable. The two young leads beautifully embody what it’s like being young and in love.

Porter’s creative direction throughout the film is exceptional. From capturing the couple’s fun-filled moments to even the tough conversations, the Pose alum does a stellar job conveying it all through the screen. 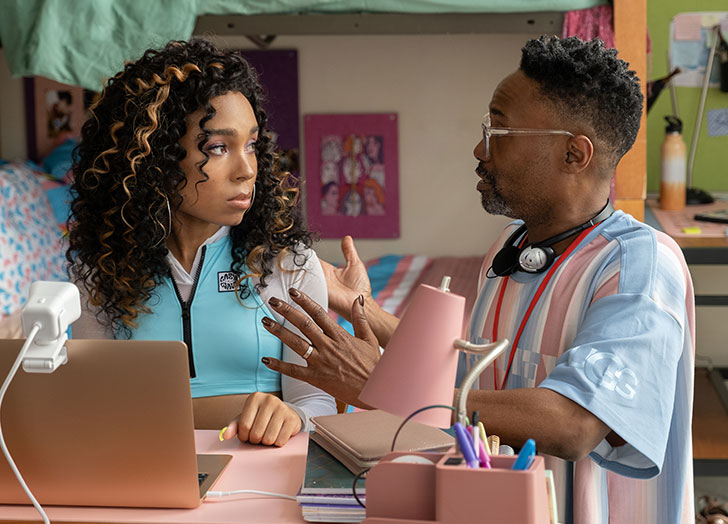 Now, don’t get me wrong. I loved this movie. But, I couldn’t help but notice this *one* flaw in the story. The writing does a good job of building Kelsa as a rich character. In the movie, we get to know her beyond her trans identity. However, we never get to learn more about her transition.

While filming a video for her Youtube channel, she briefly mentions the process. But in many ways, it felt like a missing puzzle piece in Kelsa’s life story. ﻿Perhaps ﻿a series of flashbacks could have given some insight into her past.

If you’re looking for a feel-good movie, Anything’s Possible will definitely suffice. Though the movie follows the standard coming-of-age/romance formula, it puts a creative spin on a modern-day love story. Yes, the movie is filled with cute moments, but it also tackles tough topics surrounding trans youth and the trans community, which creates an open space to have much-needed conversations.﻿