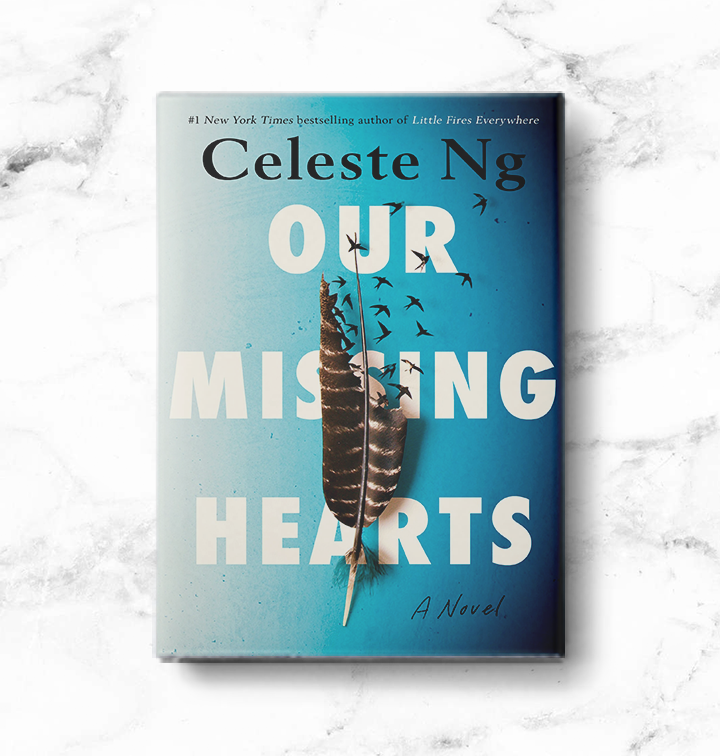 Books are banned, internet searches are monitored and neighbors are encouraged to spy on one another in Our Missing Hearts, a heartbreaking new novel by Celeste Ng (Little Fires Everywhere).

Set in a dystopian near future, “in a version of America that's like ours but maybe with the volume turned up a little bit,” as Ng explained to NPR, Our Missing Hearts centers on 12-year-old Noah “Bird” Gardner. Bird lives with his father, a former college linguistics professor who now works at the college library shelving books. His mother, the Chinese American poet Margaret Miu, vanished without a trace three years earlier, around the time her work became considered controversial amidst the passing of PACT (Preserving American and Culture Traditions), an act opposing foreign cultural influences that allowed the U.S. government to rehome children whose parents are accused of being un-American.

Out of the blue, Bird receives a mysterious letter, a page covered with drawings of cats. Knowing it’s from his mother, he sets off to find her in the book’s central plot. It’s a dangerous mission; this is a world—scarily similar to the one we’re living in—in which people with Asian features are attacked in broad daylight. Still, Bird’s resolve is unflappable. Traveling to New York City, where the letter was postmarked, he connects with an underground network of librarians dedicated to rescuing disappeared books, some of which inspired anti-PACT demonstrations and forced his mother to go underground for the sake of her family.

Though Bird does ultimately find his mom, it’s a bittersweet reunion; Ng makes it clear there’s no happy ending here. The second part of the book, narrated by Margaret, outlines how America got to this place, beginning with a period of economic turmoil known as “The Crisis” that led to the creation of PACT.

Our Missing Hearts is a departure from Ng’s previous novels, but her talent is as apparent as ever. The novel shines when narrated by its innocent, precocious protagonist. Bird is wise beyond his years, holding little to no resentment toward his mother for leaving and maintaining a modicum of hope that they’ll be a regular family again someday.

A poignant and timely commentary on anti-Asian hate, child separation and book bans, but also a celebration of the power of words and stories and the love between mothers and their children, Our Missing Hearts is a gut-punch of a novel that should serve as a cautionary tale. As Ng writes, “Bird and Margaret’s world isn’t exactly our world, but it isn’t not ours either.”