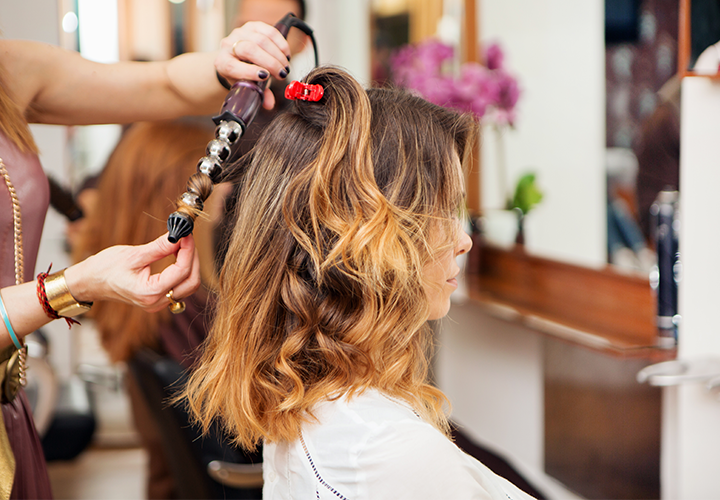 Achieving effortless beach waves with naturally pin-straight hair is damn near impossible. I would know, because I’ve spent the majority of my life trying to make it happen.

First, I rolled my hair up with tissues to make DIY overnight rollers. Spoiler alert: didn’t work, and left me walking into middle school with a weird, uneven mop. Then, I graduated to my grandma’s hot rollers which gave me voluminous curls that seemed promising but quickly fell flat. Salt sprays and blowouts? Yup, tried those too.

But when I found the Bed Head Curlipops Curling Wand, everything changed. I can’t take full credit for the discovery—the wand was actually introduced to me by a fellow editor. I had always admired her tousled bends, so when she told me that her secret was actually a $21 curling wand from Amazon, I had to try it (I bought it the one-inch "loose curls barrel" version).

Two days later, I began my final experiment in getting my strands to cooperate. I unboxed the Curlipops wand and accompanying heat protective glove and got to work. After dividing my hair into sections, I cautiously wrapped a small one around the one-inch barrel and hoped for the best. My glove-clad fingers released it and revealed a flawless loose wave. Encouraged, I continued around the rest of my head and then headed out the door.

At 5 p.m., I was shocked when I looked in the mirror and saw still-intact waves staring back at me. That’s right, this curling wand even passes the all-day test. If you have relentlessly straight hair, you know what a huge feat that is. It’s because this Bed Head wand heats up to 400 degrees Fahrenheit to seal the curl in and make it last.

And not only that, but every time I use this wand, I spend the day fielding compliments. I never got comments about my hair until I started using this guy. It leaves my hair looking shiny and frizz-free, not unhealthy and scorched like other heat tools. Seriously, I’ve been asked multiple times if my hair is naturally wavy, because it looks that effortless and good. No wonder this thing has over 2,000 five-star reviews on Amazon.

The TL;DR? If you’ve given up on getting your straight hair to hold a curl, give it one last try with this curling wand. Trust me, you won’t regret it.

beauty
by Jenny Jin
10 Genius Beauty Tips We Learned on TikTok
beauty
by Jenny Jin
The 15 Best-Smelling Body Washes for Every Preference
beauty
Sponsored
TikTokers Can’t Stop Talking About This Gift for the Holidays
beauty
by Chelsea Candelario
TikTok Fact Check: Can You Really Use Dandruff Shampoo to Clear Acne?
beauty
by Chelsea Candelario
The Stylists Have Spoken: Winter Gold Is *The* Hair Color of 2023
beauty
by Nakeisha Campbell
22 Holiday Party Hairstyles That’ll Make You Stand Out From the Crowd