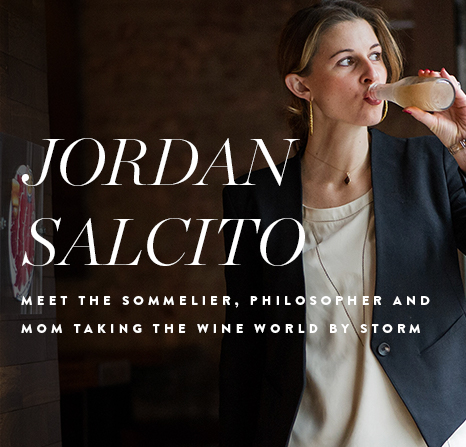 If the word sommelier conjures up bad memories of a stuffy guy in a suit trying to sell you an overpriced Chenin Blanc, it’s time to meet New York City wine goddess Jordan Salcito. She’s the director of wine special projects at the renowned Momofuku family of restaurants, as well as the founder of Bellus Wines and RAMONA—a chic wine cooler that’s been sipped by stars like Kanye West, Rihanna, P-Diddy and Alicia Keys, just to name a few. Her philosophy? “You can never know everything about wine. It’s just not possible. So start with this: Good wine is wine you like. And just like Amelia Earhart said, ‘The more one does and sees and feels, the more one is able to do.’”

Salcito never expected to spend her days (and nights) sipping wine with legendary chefs in world-class restaurants. In college, she majored in English literature, minored in philosophy and briefly considered going to business school. But when she found herself working as a hostess at Wylie Dufresne’s wildly innovative restaurant WD~50, it changed the way she thought about eating and drinking. “Wylie was a philosophy major, too, and he’s such a critical thinker. It was so interesting to see how his attention and curiosity applied to the restaurant industry. Up until then, I never realized it could be possible.”

Inspired, Salcito dove headfirst into the restaurant world, putting herself through culinary school and doing an externship at New York City’s iconic French restaurant Daniel. But her big break came when she was offered a position at Nick & Toni’s restaurant in East Hampton, and one night, the full-time sommelier was a no-show. “It’s a cardinal sin of the restaurant world, but it was the best thing that ever happened to me,” Salcito said, laughing. “I had no real credentials; I just asked people who were smarter than me a bunch of questions. Getting thrown into the fire? It’s an amazing way to learn.”

On taking her first-ever sip of wine. “My parents would always let my younger sisters and me try wine when they would drink it, but it wasn’t very good, so I never liked it very much. The first time I ever had wine and thought it actually tasted good was a California Cooler. I, uh, won’t tell you what age I was when I tried it.”

On staying a somm during her pregnancy. “I was tasting wine and spitting it out, not drinking it, but my sense of taste was heightened, so I found it really useful. I love being pregnant. I was so energized to have this life inside of me. It was such an amazing thing.”

On working alongside Momofuku’s David Chang. “Dave’s challenge and mandate is to understand the rules and then break them. I spent so many years following the rules that it’s so fun getting to create programs that get people excited about wine again. Oh, and deliciousness. I don’t know many chefs who are as maniacal about deliciousness as he is.”

On her favorite guilty-pleasure pairing. “My go-to is french fries and Savart Champagne. I’m all about the high-low contrast. RAMONA and crudités is fantastic, too.”

On her life, sans wine. “When I'm not drinking wine, I love spending time with my son, Henry, and watching Game of Thrones with my husband Robert, [Bohr—partner and sommelier at SoHo restaurant Charlie Bird]. Khaleesi is my favorite character, hands down. I mean, she’s just such a badass.”

Jordan Salcito is kindly holding our hand as we enter the wonderful world of wine. Click here for Jordan's picks for PureWow's Wine of the Day.