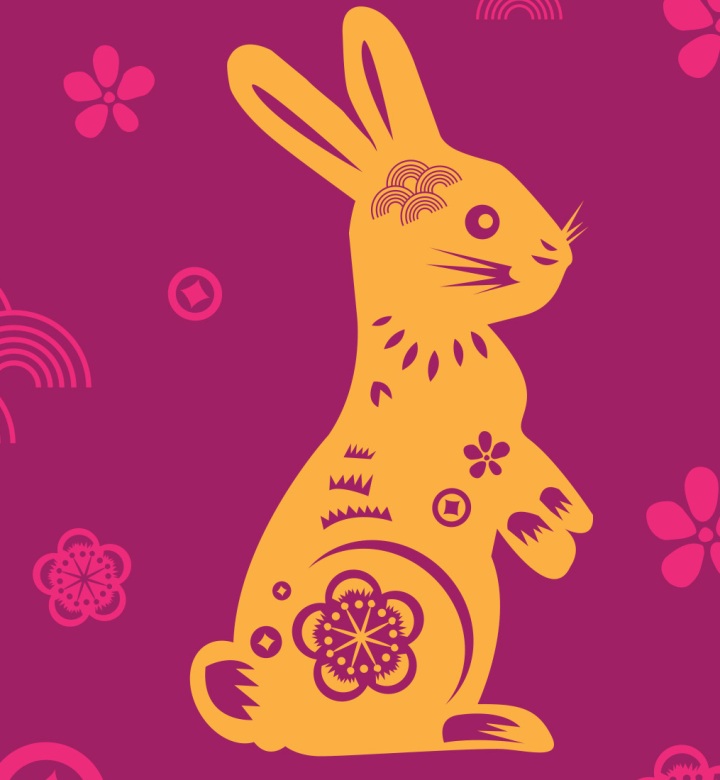 Chinese New Year, also known as the Lunar New Year or Spring Festival, is celebrated at the second new moon following the Winter Solstice. (This year, January 22, 2023.) The festival marks the end of winter and the beginning of a long-awaited spring! According to the Chinese Zodiac, 2023 is the Year of the Rabbit. So what does the Year of the Rabbit have in store for us? And will it be calmer than 2022 (The Year of the Tiger)? Let’s find out!

Was I Born During the Year of the Rabbit?

The Chinese Zodiac dates back to the Qin Dynasty over 2,000 years ago, and is rooted in a system of zoolatry (or animal worship). As the legend goes, the Jade Emperor challenged all of the animals in the Kingdom to a “Great Race.” Whoever arrived at his Palace first would win his favor. Known for his speed, the Rabbit was sure that he would win the race, and was particularly positive that he would beat the Ox, his slowpoke neighbor. On the day of the race, the Rabbit got a head start at dawn. He was in the lead but exhausted, so thinking that he had the race in the bag, he decided to take a nap. When he woke up though, three other animals had already crossed the finish line, including the Ox.

Because of that nap the Rabbit took in the legend, Rabbits are known for being quiet, dreamy and imaginative. But don’t underestimate them because though they seem timid, they’re actually quick-witted, strategic and ambitious.

What’s in Store for the Year of the Rabbit?

The Year of the Tiger (2022) was about making big changes, but now in the Year of the Rabbit, we’re meant to take a step back, and (if you can believe it) chill. Rabbits are quick, but gentle creatures, and 2023 will be a year when thoughtful action is rewarded more than huge risks. After all the difficulty and tumult of the last few years, 2023 is for cultivating peace and patience!

In addition to the animals, the Chinese Zodiac also cycles through five elemental types. So this is not only the Year of the Rabbit, it’s the year of the Water Rabbit. Water years bring out our emotions more than any of the other elements. The Rabbit is also associated with Yin (feminine, receptive) energy. Rabbits are sweet creatures who approach challenges creatively. We should expect a slower pace than we’ve become accustomed to this year. Some of us might start to feel impatient with what feels like a lack of growth, but is actually a slow burn toward success. It will also be important this year to have regular check-ins with our emotions and to genuinely feel our feelings.

Born under this sign, you might think that the Year of the Rabbit is your time to shine but sadly, it’s actually the opposite. Traditionally, a zodiac sign’s year is the most unlucky for them in Chinese astrology. That said, with 2023 being about trusting our gut and thinking creatively, as a Rabbit, you know how to do this better than most. You will be rewarded for your patience.

Though this isn’t the ideal year for the Rabbit, this year will be great for Dogs (who want to enjoy the good life), Pigs (who can’t help but go slow), and Goats (who are often underestimated).

Roosters (who are painfully outspoken), Dragons (who can be ambitious to a fault) and Rats (who do better in fast-paced, scrappy times) may have a harder time this year.

What Brings Rabbit Luck This Year?

The Chinese believe that certain symbols, directions and colors are auspicious for each zodiac sign. This can apply to those born as that sign as well as for all of us during that particular zodiac year. During the Year of the Rabbit those are:

Chinese Zodiac Elements: How to Know What Yours Is and What It Means