What Does LGBTQIA+ Stand For? 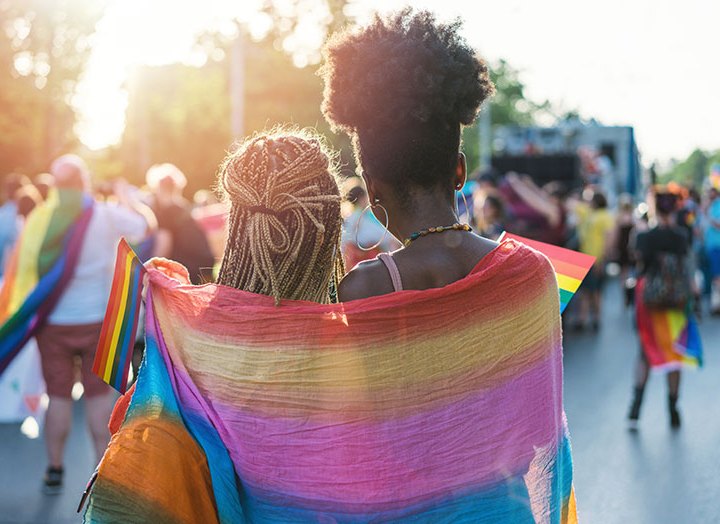 You’ve heard of LGBTQ, which stands for Lesbian, Gay, Bisexual, Transgender and Questioning or Queer. But a few more letters have been added to the acronym to represent everyone. LGBTQIA+ is a way for someone to describe their sexual orientation or gender identity (if they choose to, FYI). If you’re still not sure what it means, here's everything you need to know about the term:

What does LGBTQIA+ stand for?

As mentioned, we are already aware of LGBT, so let's dive into the new letters. According to the Lesbian, Gay, Bisexual and Transgender Community Center, the letter Q can mean Questioning, which refers to those who are exploring their sexual orientation or gender identity.

Or, it can stand for Queer, a term that's not exclusive to a sexual orientation or gender. Cleo Anderson, an employee of the LGBT rights group GLAAD, told USA Today: “Queer is anything that exists outside of the dominant narrative. Queer means that you are one of those letters [LGBT], but you could be all of those letters and not knowing is OK.”

The acronym has since expanded to include an I and an A at the end, making it LGBTQIA. The I stands for intersex. Per GLAAD, intersex is “an umbrella term describing people born with reproductive or sexual anatomy and/or a chromosome pattern that can't be classified as typically woman or man.” However, it also reflects someone who doesn't identify with a specific gender.

And the A is used to represent those who identify as asexual, which refers to those who don't feel sexual or romantic attraction to others.

This symbol is used to represent those who do not identify with one of the letters in the acronym (for example, those who identify as pansexual or gender-fluid). The plus sign also includes agender, non-binary, polyamorous and a few more identifications that don't fit the original letters. At the end of the day, the term sets the tone for widening the spectrum and making it welcoming for everyone.

While LGBTQ means the same, the 2 stands for two-spirit. It's a term used by indigenous communities to represent gender and sexual orientation. In 1990, Elder Myra Laramee proposed the name and incorporated it into the Indigenous language moving forward.

Why did the original term change?

In the 50s and 60s, gay and lesbian were predominately used until the '90s when bisexual and transgender was added to the acronym. Hence why LGBT was originally conceived as a more acceptable way to describe all the individuals that were previously referred to as the “gay community.” And yet, this acronym was leaving various sexual orientations and gender groups out.

The term LGBTQIA+ lends itself to being more inclusive to everyone. (It's why the term BIPOC, which represents Black, Indigenous and People of Color, is also gaining momentum as a more appropriate way to refer to all people of color.)

What if I don't identify with any of the letters?

For one, our identities are always evolving and we're always trying to figure it out. There's no one size fits all and you don't have to be pigeonholed into one group. Heck, you don't even have to label yourself if you're not ready or comfortable. Plus, these aren’t the only letters and terms in use. In fact, the abbreviation is constantly evolving, because sexuality and gender can be as fluid as you want them to be.

For more information, check out the Lesbian, Gay, Bisexual, Transgender, Queer, Intersex, Asexual Resource Center (LGBTQIARC) at the University of California at Davis for an extensive glossary.

I'm worried I'll say the wrong thing. What do I do?

It's always helpful to ask someone first how they self-identify. You should never try to assume someone's gender or sexual orientation. GLAAD  also has a helpful list of terms to avoid (and preferred terms), so you can continue educating yourself on the LGBTQIA+ community.

10 Queer-Owned Fashion Brands to Support All Year Round