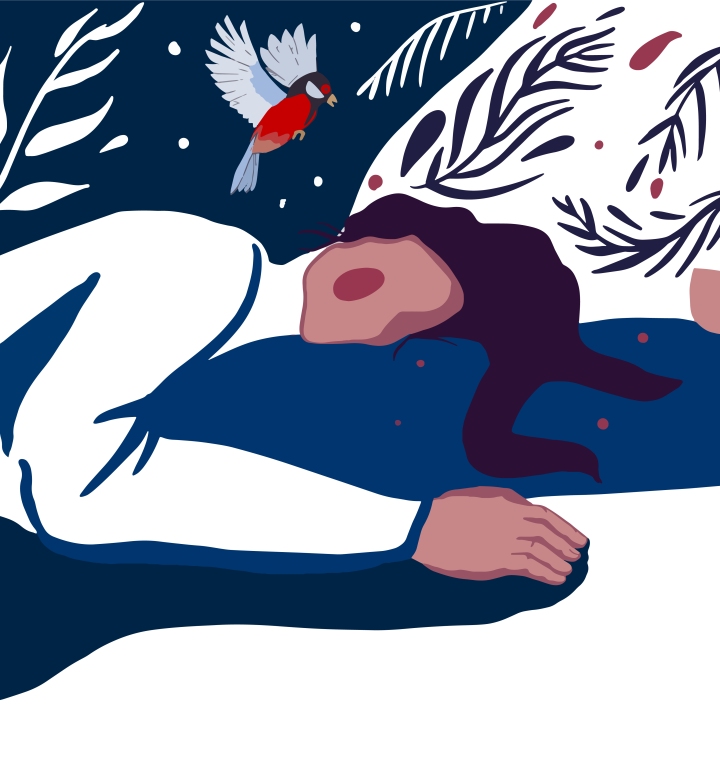 There’s nothing better than drifting off to dreamland at the end of a long day…unless, say, your dreamland is infested with zombies and you wake up terrified and in a cold sweat. Yes, we’re talking about nightmares—the fairly common REM sleep event that can be seriously unsettling. Indeed, the only thing that distinguishes nightmares from other types of dreams is that they’re downright unpleasant for the dreamer. The good news, though, is that nightmares might serve a purpose beyond simply disrupting your beauty sleep.

According to Jesse Lyon, a certified trauma counselor and Chief Dream Scientist at DreamApp (a mental health tech company that seeks to help people connect with the power of dreams to overcome anxiety and find freedom and mental clarity), nightmares are a manifestation of emotional pain, trauma or stress from your waking life that the brain has not had a chance to adequately process. In general, researchers tend to agree that nightmares occur as the result of memory integration and mood regulation processes in the brain—though things like fever, alcohol withdrawal and certain medications are among the factors that can contribute to their frequency and intensity.

That said, it’s an individual’s subjective experience that determines whether a dream is good or bad. (As an example, Lyon cites the documented increase in the number of people experiencing apocalyptic nightmares during the pandemic and, perhaps more importantly, the fact that some people reported enjoying them.) Ultimately, he explains, “Dreams of any type are just pictures in your mind; it’s how a person interacts with those pictures (i.e., scared, excited) that indicates how they’re processing events from their waking life. That’s the mental health connection.”

So what does all this mean? Lyon notes that there’s a debate among researchers regarding whether nightmares are an emotionally adaptive function, or simply represent a breakdown in the brain’s processing ability. However, as previously mentioned, there’s no question that emotional stress and trauma can trigger nightmares, which is why Lyon is one of many in the field who considers nightmares to be an important diagnostic tool. (Note: Having nightmares at least once a week is considered to be clinically significant.)

After all, when you dream, your brain is creating new neural networks and deepening existing ones in order to help with memory organization and emotional processing, which translates to growth and healing; when it comes to nightmares, however, Lyon likens the exercise to a form of practice.

“A person can practice basketball for hours every day, but they won’t always naturally get better at it. Some people will progress considerably with independent practice, while others require a good coach in order to benefit from it.” In this same way, recurring or frequent nightmares are messages from your emotional self that may indicate that the brain is trying to do good work, but has gotten stuck and is spinning its wheels instead.

As you might have guessed, that’s where the coach (in this case, a mental health provider) comes in. Lyon confirms, “There is good research showing that when you use dreams and connect them with your waking life in therapy, they are incredibly transformative and positive for mental health,” adding that “once we learn not to be afraid of our mind, healing isn’t far behind.”

Bottom line: Frequent nightmares are a symptom that, much like any physical manifestation of pain, warrant your attention. As such, if you’ve been tossing and turning due to a turbulent dream life, it might behoove you to see your nightmares not as a nuisance (though they may be that, too), but as an opportunity for emotional growth and healing—provided you put in some daytime work with a mental health professional.  (So, yeah, you’re going to have to do more than just sleep on it if you want to see the silver lining of the scary stuff.)