Pain to Passion: Susan Burton Finds A New Way of Life for Herself and Other Formerly Incarcerated Women

It’s one thing to make lemonade out of the lemons life gives you. It’s a completely different feat when that lemonade ends up providing much-needed sustenance for your entire community. That, in a nutshell, is the story of Susan Burton. At 69 years old, she is an ardent activist, author and founder of A New Way of Life—a non-profit organization that helps formerly incarcerated women gain re-entry into society. Meeting or listening to her, you’d never think her upbringing was a tumultuous as it was. Her demeanor is inviting and calm. She speaks with a slow-paced drawl reminiscent of Maya Angelou and her words are precise and carefully thought out.

But, before she was the woman The New York Times called a modern-day Harriet Tubman, Burton lived a thousand lives and then some. Her story hits every statistic there is about the life of a poor Black girl in America: From childhood sexual abuse to alcohol and drug struggles, it highlights just how the U.S. fails Black people daily.

Still, Burton has broken every chain that bound her, going on, in her 40s, to found a non-profit organization that gives other women help and hope.

Here is her incredible story of making amends, self-forgiveness and paying it forward. 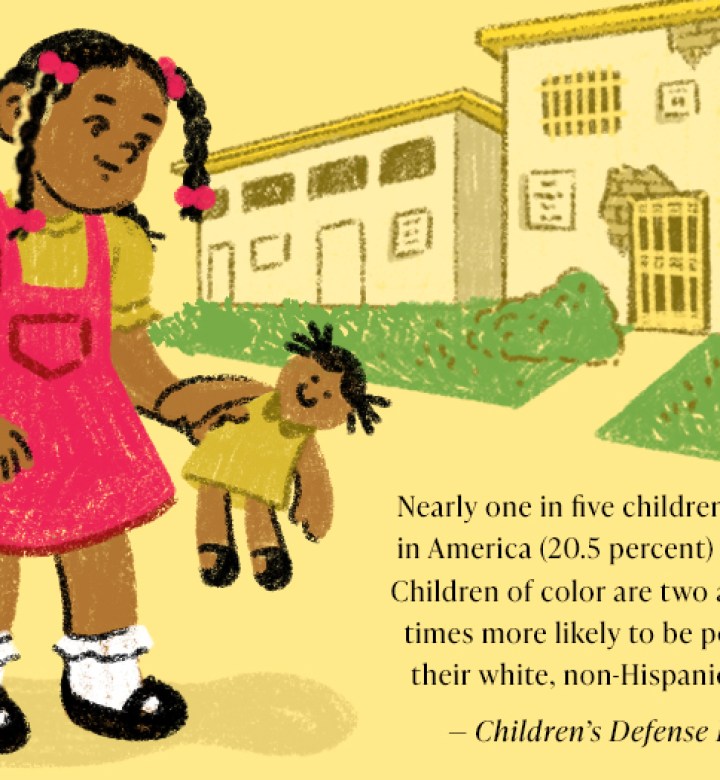 Growing Up In The Projects And Early Life Trauma

Born and raised in the Aliso Village projects in Los Angeles with her mother and five brothers, Burton grew up in an under-resourced and chaotic environment. “It was a difficult place to live,” she admits now. “And I got harmed in many, many ways.”

One of these harms was the sexual abuse she suffered at the hands of her aunt’s boyfriend, who had been molesting her since she was about three years old. He was a patient at the Camarillo State Mental Hospital and they had to pick him up on weekends. Each car ride to the institution elicited anxiety. “Sitting in that back seat, as a little girl, I would literally try to vanish in the upholstery. But to zoom out [and remove myself from the situation] I would just count the palm trees leading up to this big building where he’d be standing on the steps.”

The abuse went on for about a year, until Burton was four years old and her aunt finally found out. But instead of coming to her niece’s defense and acknowledging the alarming act, she shamed the young girl. “She called me a dirty, nasty little girl and swore me to secrecy,” Burton says. “I was 46 years old before I ever told my mom.”

The incident would be the first of many that taught Burton the art of repression and mistrust.

The next notable one was on Christmas Eve 1965, when 14 year old Burton and a neighborhood friend went to a Christmas party. On their way back home, the two girls were violently raped by a group of boys. Her friend, whose mother was known to be strict, made Burton swear she’d never tell, and, repeating the pattern of dissociating from trauma, she complied. Unfortunately, unlike the other secrets, this wasn’t one that would stay under wraps. Months later, Burton found out she was pregnant. 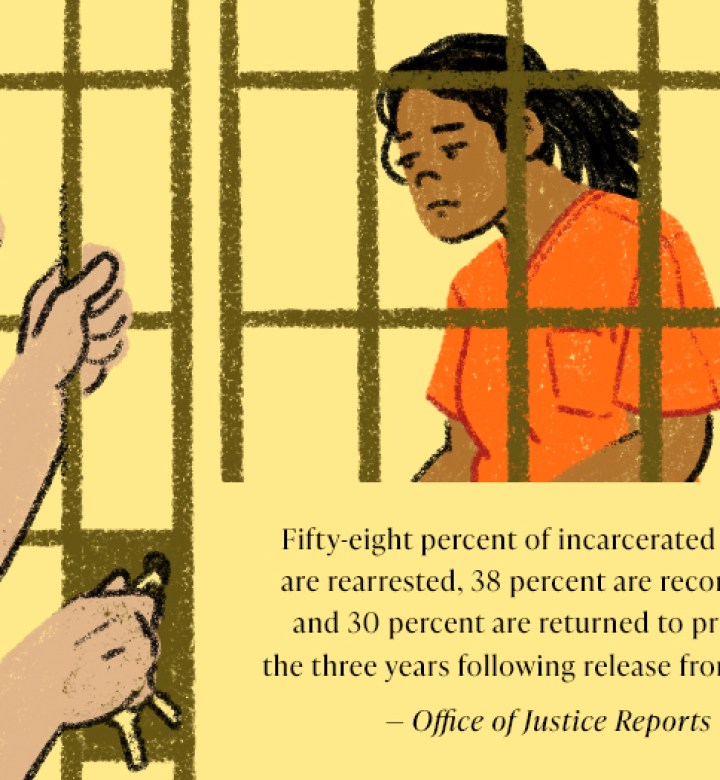 The years after Burton gave birth to her daughter, Toni, were filled even more discord. She ran away from home shortly thereafter and fell into the hands of a violent pimp who had a hold on her life for the following five years. She eventually escaped his grip and fell in love with another man with whom she conceived her second born, Marque, nicknamed K.K.

But once again, trauma struck. In April 1981, Ms. Burton’s five-year-old son was fatally struck by an LAPD car in a hit-and-run. The cop who killed him never stepped forward, nor did the department ever investigate or attempt to hold anyone accountable. The death of K.K. finally broke the decades-long flood gates of emotion.

“Along with the loss and grief, there was this rage and anger. That sent me into a spiral of [emotion] that I tried to drown with alcohol and then escalated to drug use,” Burton explains. “My life’s trauma began to play through my mind and my body, and the hopelessness of my life felt like I was wearing it.”

She would enter and reenter prison six times throughout the 80s and the 90s. Each time, she’d dutifully serve her sentence, go back into the same unhealthy environment and before long, she would be back to abusing drugs and drinking.

While there was no denying her inner demons, there were also systemic disadvantages at play. For one, the crack epidemic was at its height, and with its ease of access, a recovering addict could always find themselves hooked again. On top of that, each time she was released from prison, she wasn’t given any resources to help her reenter society. No AA, no educational opportunities, nothing. She was also considered a felon, which meant viable employment was off the table. The chances for recidivism were so high, that even the guards were sure she’d be back.

“The last time I was released from prison, the guard said, ‘Burton, we’re holding your bed for you…’ The system is designed to fail people, cycle them in and out of prison and work them like slaves,” she reflects.

Fortunately, change was on the horizon. A friend told her about the CLARE Foundation—a rehab facility in Santa Monica where, in 1997, Burton finally became sober. She was able to get sobriety sponsors, the therapy she needed and, most importantly, a supportive community that would keep her on the right track. 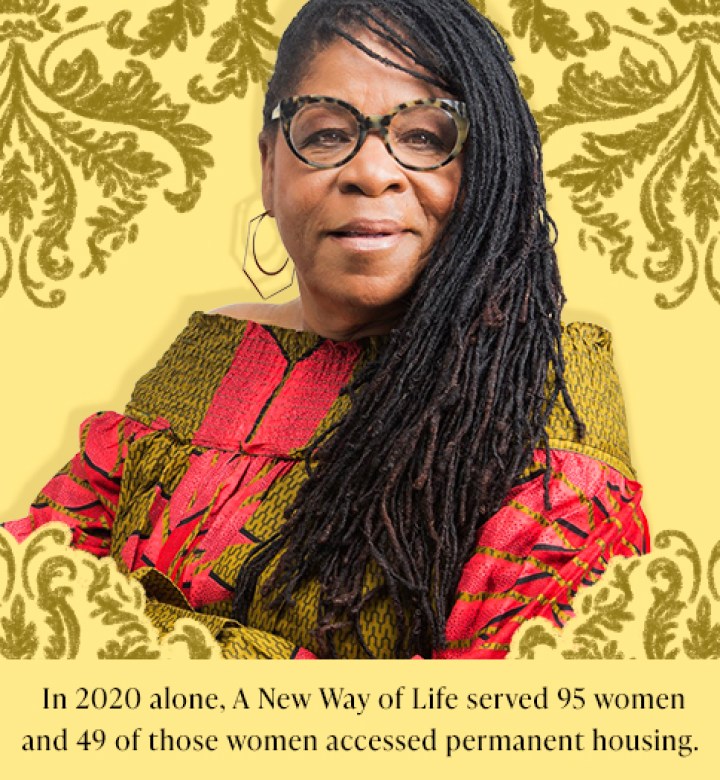 A New Way of Life/Kaitlyn Collins

After all that she went through, it’s easy (and understandable) for someone in Burton’s shoes to walk away and never look back. But because she had cycled in and out of the system for so long, she knew there would be other women coming out of prison who needed support.

In 1998, after saving $11,000 dollars from a job as a health aid, she, along with two friends, bought a house and began laying the groundwork for what would become A New Way of Life. The mission was to gently usher formerly incarcerated women back into society and provide them with resources to get their affairs in order.

After all, though mass incarceration disproportionately plagues people of color, formerly incarcerated women are faced with a unique set of circumstances, since research shows that most are the primary caretakers for their families. When they go to prison, their children go into the foster system if no other family members step up, and once they’re released, getting those parental privileges returned can be an uphill battle. Without proper rehabilitation and support, it’s easy for those women to go back to prison.

That’s where A New Way of Life comes in. Each house (there are now 10 in California) gives about seven recently released women free shelter for as long as they need it and equips them with an action plan to get their lives on the right track. Those who want to go back to school get help enrolling. Those who want to get custody of their children get access to lawyers. And those who need help staying clean are given sponsors and access to community 12-step programs.

On a day-to-day basis, A New Way of Life gives women a solid structure they can follow. There are morning meditations and curfews. The women are responsible for cleaning and cooking for each other and above everything else, it gives them a safe and stable environment with people in similar situations. To date, the program has aided over 1,200 women. In 2018, Burton created the SAFE Housing Network, which teaches other people how to replicate her original program in their own communities. SAFE now operates in 13 states and two non-U.S. countries—Kenya and Uganda. 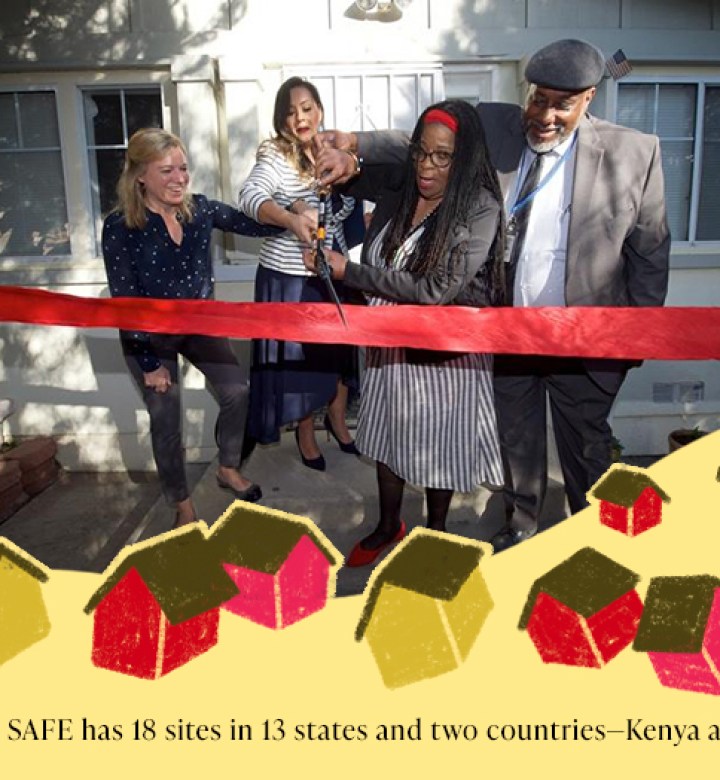 A New Way of Life/Kaitlyn Collins

Twenty-three years after launching A New Way of Life, Burton has collected a string of accolades. She was named as a CNN Hero in 2010, the LA Times also listed her as one of the New Civil Rights Leaders in 2015 and she was awarded a Doctor of Humane Letters honorary degree from California State University, Northridge in 2019. Still, when she looks back at her journey, she believes none of it would’ve been possible had she not been given the opportunity to enter into CLARE.