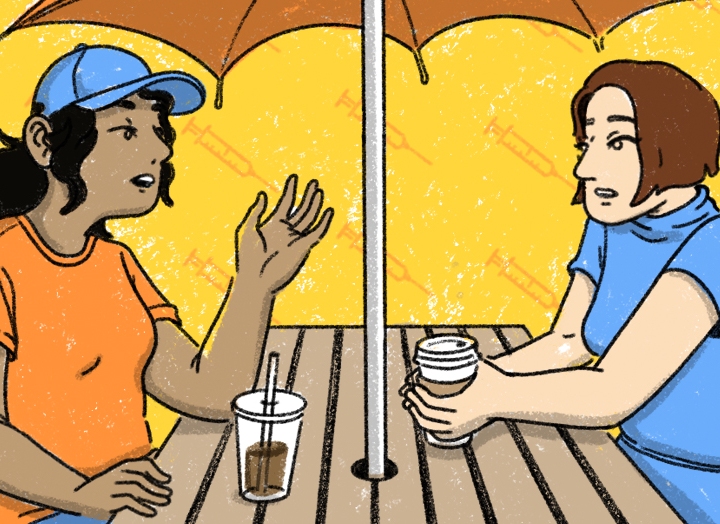 Right now in America, there is a COVID vaccine available for every single person who’s eligible to receive it. And yet, as of the beginning of last month, an estimated 93 million eligible Americans remain unvaccinated. For those of us who did our part and got the vaccine, it can be incredibly frustrating to talk to the folks who refuse to do so. It can also be extremely tempting to lash out at an unvaccinated person when the topic comes up (don’t tell us you haven’t at least fantasized about it). But, as cathartic as it may feel, attacking and shaming people into doing what you want them to do is counterproductive. There are, however, some things you can say that might push the needle (pun intended) a little further in your desired direction. Here, three things to say to someone who’s hesitant about the vaccine, and the one thing you should avoid mentioning.

Déjàvirus Is Real. Here’s How to Not Feel Gaslit By It

1. “What’s stopping you from getting vaccinated?”

Are they worried about the safety of the vaccine? Do they think they’d be able to beat COVID on their own if they contract it? Once you have a clearer picture of why this person isn’t getting vaccinated, you’ll be able to tailor your approach accordingly. If they’re doubtful of the vaccine’s safety, point them to the facts that the FDA granted full approval to the Pfizer-BioNTech COVID-19 vaccine for people ages 16 and older on August 23 and that the technologies used to develop the COVID-19 vaccines have been years in development to prepare for outbreaks of infectious viruses.

If you’re talking to someone who thinks that beating COVID sans vaccine would be no big deal because they’re young and healthy, make sure they know that COVID won’t necessarily spare them because of their current age and health status. For example, according to a CDC study from August 27, unvaccinated people are about 29 times more likely to be hospitalized with Covid-19 than those who are fully vaccinated. And while it’s true that young people don’t get as sick on average, they can. According to the CDC, nearly 10,000 people under the age of 40 have died in the U.S. of COVID-19 to date. So while young, healthy folks aren’t at as much of a risk of serious illness or death, it absolutely can happen.

2. “How would you feel if your choice not to get vaccinated resulted in someone else getting really sick (or even dying)?”

Even if a person is young and healthy, we’re willing to bet they have at least one immunocompromised person in their life. Even if that immunocompromised person is vaccinated, a breakthrough infection could be deadly. Communicate that even if this person doesn’t want to get vaccinated for their own benefit, they should consider how their choice will affect those around them—especially those who are most vulnerable to COVID-19.

3. “Weren’t you guys planning on honeymooning in Greece?”

Some additional quick positives to focus on:

Going into attack mode is the fastest way to ensure that this unvaccinated person will dig their feet further into the sand. Even if it’s how you feel, insulting someone is counterproductive. Rather than being judgmental, try to be patient and realize that, in most cases, convincing someone to get the vaccine isn’t going to happen immediately. Instead, it’s often a longer process, and a discussion rather than a lesson. Instead of condescending to them, try to understand their position and remain as levelheaded as possible.

It’s also important to keep in mind that there’s a big difference between being hesitant about this particular vaccine and being anti-vaccine in general. Those in the latter group are much more set in their anti-vax ways, and likely won’t be swayed by a conversation (or even a series of conversations). Those who are hesitant about the COVID vaccine might be coming from a less rigid place and might be more open to hearing your perspective.

Just as Rome wasn’t built in a day, attempting to change someone’s mind about getting vaccinated takes time and patience, but it’s totally worth it.

Can I Ask Someone If They Got the COVID Vaccine? (And 3 Other Post-Pandemic Etiquette Quandaries)