How Often Should You Change Your Toothbrush? (Hint: It’s More Often Than You Think) 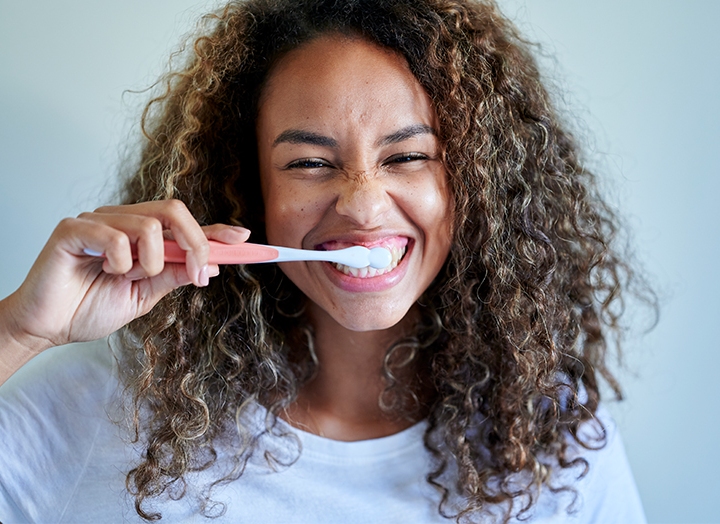 Teeth need to be brushed twice a day, and it’s toothbrushes that do the dirty work. Indeed, no matter how diligent you are about brushing, if your toothbrush isn’t up to the task, your oral hygiene will suffer. To avoid this scenario, we asked Dr. Tina Saw, dentist and founder of Oral Genome, to answer some pressing questions about how best to care for the brush that cares for your teeth. So, how often should you change your toothbrush, anyway? Dr. Saw says every three months at a minimum but read on for the full story before you break in a new one.

How often should you change your toothbrush or electric toothbrush head?

As previously stated, the expert tells us that both regular toothbrushes and electric toothbrush heads should be replaced at least every three months. However, Dr. Saw suggests you spring for a new toothbrush even sooner under certain circumstances. For starters, you should swap that sucker out immediately if you notice flaring of the bristles (more on that later). It’s also time for a new toothbrush if you have been sick recently, as “bacteria and viruses can continue to proliferate between the bristles.” (Ew.)

What happens if you don’t change your toothbrush?

So your toothbrush took its dying breath a month back, but you still kept it around. Well, don’t panic...but do get a new toothbrush stat if you care about keeping your pearly whites in pristine condition. We hinted at this already, but the two major risks associated with keeping a toothbrush around for too long are bacteria and flared bristles. It goes without saying that you don’t want to be putting a petri dish in your mouth every morning and night, as you’ll end up “transferring harmful bacteria” to your teeth and gums, rather than scrubbing it away. As for flaring of the bristles, Dr. Saw says this will inevitably happen over time and can cause receding of the gums. In worst case scenarios, she says, flared bristles can cause enough damage to the gums that roots become exposed, causing tooth sensitivity, among other dental problems. It’s also worth noting that fraying bristles are not very effective at removing plaque, which is bad news for your teeth, too.

How to take care of your toothbrush properly

Now you know you shouldn’t use a toothbrush for too long, but how can you best care for it during its three months of life? Glad you asked. Dr. Saw says that, aside from changing your toothbrush regularly, there are a couple things you can do to minimize bacteria growth—namely, keep it uncovered so that it dries between brushing and thoroughly rinse it with fresh water immediately after use.

Risks of keeping your toothbrush too long

We covered this one already, friends, but it bears repeating: If the bristles on your toothbrush have taken too much of a beating, they won’t adequately clean your teeth and can even damage your gums. Plus, bacteria build-up on an old toothbrush further increases your risk of gum disease and can even make you sick. In other words, if you think your toothbrush has seen better days, it’s best not to take any chances.

7 of the Best Teeth Whitening Options, According to a Dentist