By Kelsey Paine
••
Sponsored by 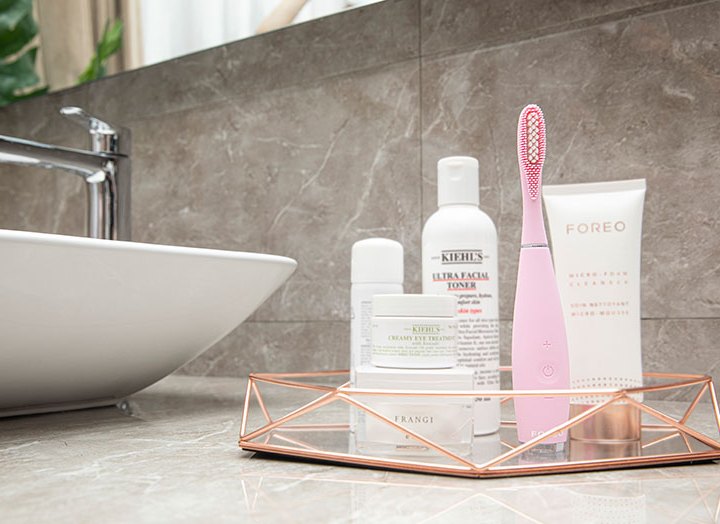 If you’re like me and spent many of your teen years wearing braces, taking care of your hard-earned smile is probably pretty high on the list of priorities. If you don’t remember those palate expanders, wire retainers and the dreaded elastic bands (not to mention the $$$) then lucky you. But if you feel my pain, then you understand why it’s practically required that I keep my teeth in tip-top shape. This means frequent trips to the dentist for cleanings, religiously wearing my nightly retainer and flossing (still need to work on this one). And of course, using an electric toothbrush.

Anyone who’s ever seen the inside of a dentist’s office knows how highly they espouse the benefits of using an electric toothbrush, so by this point in my early 30s, I feel like I’ve tried them all. But while I’ve appreciated some aspects of the various options out there, I’ve never really loved brushing with an electric. I’m always inevitably reaching for my ol’ manual brush on those nights I forgot to charge it, or I’m just feeling extra lazy. That is, until now.

My discovery? Swedish brand FOREO’s new silicone electric toothbrush, the ISSA 3. Since finally finding an electric toothbrush I’ll actually use feels like kind of a big deal, I felt compelled to share this FOREO ISSA 3 review with everyone who might be in the same boat. Here’s why it’s my new holy grail. 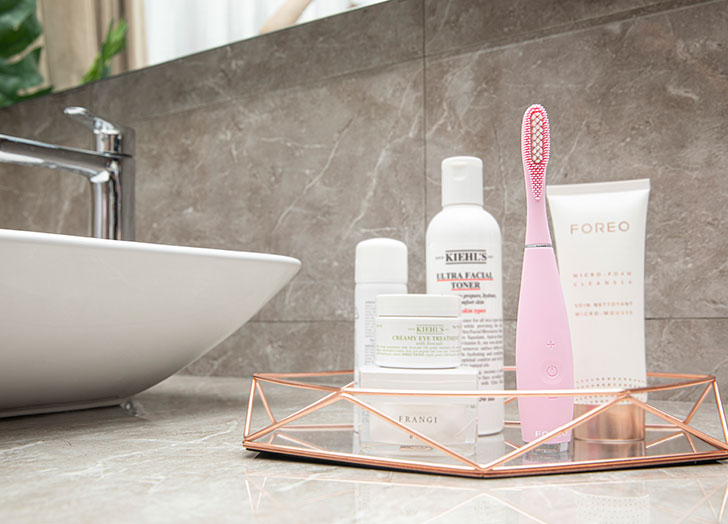 With so many bells and whistles, many electric toothbrushes out there seem much too complicated. Which is why I was so impressed with the smooth ISSA 3 setup. Once opened, there’s a QR code that took me straight to an easy-to-follow user manual. Then, I just plugged the ISSA 3 in to charge using the USB cable (like the same way I charge my iPhone). The bottom light started blinking and stopped when the charge was full, after about an hour. That was it! But here’s the best part: One charge lasts for an entire 365 days. Seriously, no carrying around a bulky charger or worrying about your brush running out of juice. Plus, it has a built-in timer, travel lock and sleek case for easy on-the-go convenience. Consider me already impressed.

2. The gentle and effective technology

After charging, I applied my toothpaste to the bacteria-resistant hybrid wave brush head, which is specially designed with PBT bristles that remove plaque, surrounded by a ring of ultra-hygienic soft silicone bristles that are super-gentle on teeth and gums. The ISSA 3 is an electric toothbrush practically made for sensitive teeth and gums—and I could feel the difference right away. Plus, it’s actually been backed by clinical studies: “Using a toothbrush with T-Sonic tech versus a normal toothbrush is more effective, more efficient in less amount of time, saves money, is environmentally more friendly and gentler on the gums,” says Dr. Nina Bal, a leading cosmetic dentist.

I’ve long struggled with bleeding gums and felt like other brushes were too harsh. But with the ISSA 3, I didn’t experience any poking or prodding, just nice sonic pulsations I could control to fit my needs. In fact, the ISSA 3 has 16 different intensities of sonic pulse technology that efficiently remove plaque, so you can totally customize it to your needs. Bonus: They also make a silicone toothbrush for kids, as well as an ISSA baby, which are both equally gentle and bacteria-busting. Not to mention they’re so cute they’ll make them want to brush in the first place. 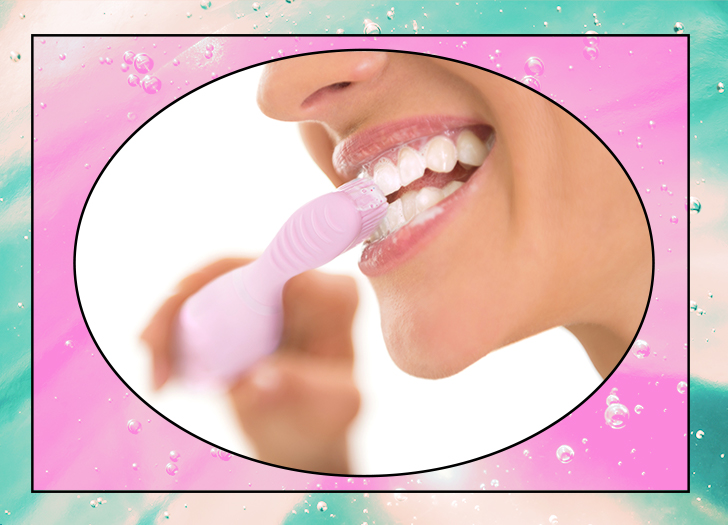 3. It feels natural to brush with

After choosing my preferred sonic pulse speed, I was able to brush my teeth the same way I would with a manual toothbrush. I didn’t need to make any awkward movements or brush longer than I normally would. Considering I’m a creature of habit, this was a big win for me. I also love the fact that the medical-grade silicone is quick drying, prevents bacteria buildup and is totally waterproof. (Because I’ve occasionally brushed my teeth in the shower. Controversial, I know.) And since you’re not throwing out and buying new plastic toothbrushes every few months, the ISSA 3 is more environmentally friendly. The brush head lasts for up to six months before it needs to be replaced—twice as long as other electric brushes out there. 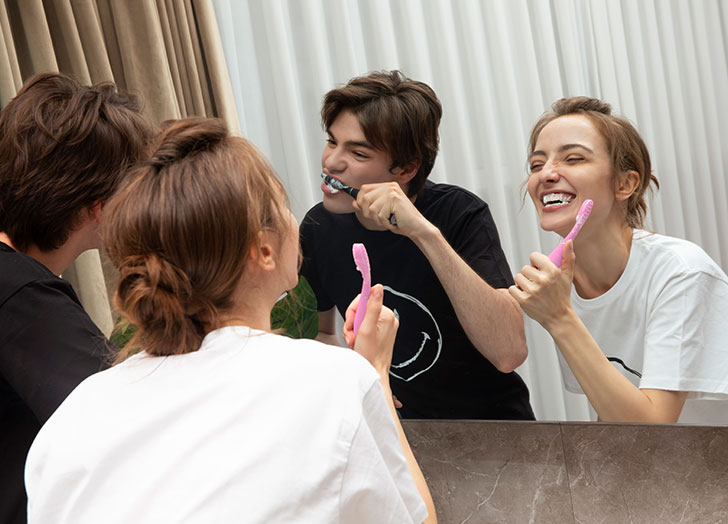 Now for my favorite part: the results. Once I completed my requisite few minutes of brushing and rinsed, I tried out the smooth and gentle tongue and cheek cleaner on the back of the brush. The verdict? My entire mouth felt squeaky-clean, like I’d just come back from a professional cleaning. I kept running my tongue over my teeth, impressed by how awesome it felt and the fact that I didn’t have to sit through any oftentimes-painful cleaning methods to achieve it. I went to bed that night somehow excited to brush my teeth again in the morning—the first time I could say that. 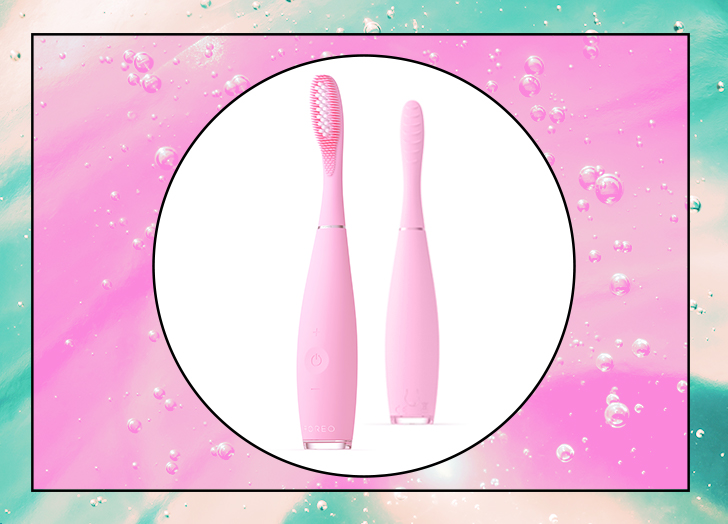 After using the FOREO ISSA 3 for a few weeks now, I’m pretty much addicted to my cool-looking, clean-feeling electric toothbrush and I’m never going back. Try it and I can confidently say you’ll feel the same way too.

10 Things Real Hairstylists Would Never Do to Their Own Hair

33 Wedding Hairstyles for Black Women to Rock All Season Long