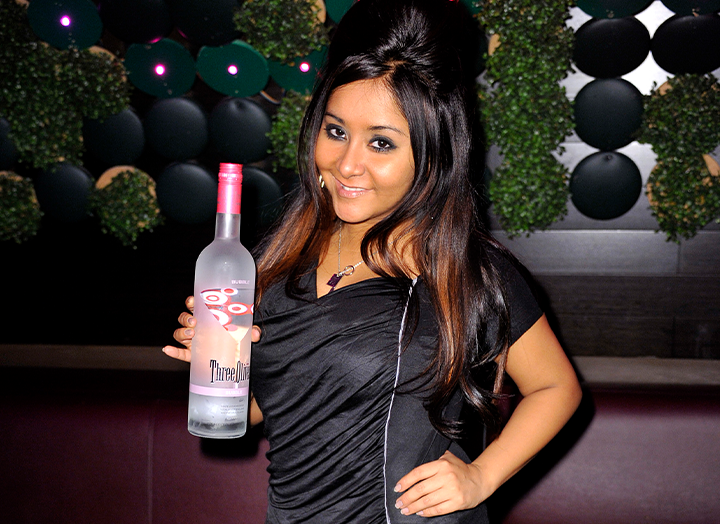 Any millennial who wasn't living under a rock remembers when Snooki and the Jersey Shore gang defined the zeitgeist, drinking to oblivion, getting into bar fights, house fights and sheer debauchery between gym, tan and laundry. For millennials, getting blackout drunk was par for the course of middling adulthood. But if you’re too young to know what GTL is, you, along with the rest of Gen Z look back at the middle aughts with eyebrows raised—drinking to oblivion? Blacking out? That’s low-key cheugy. Instead, Gen Zers are revamping the party landscape without the hangover. Here's how.

Unlike millennials whose social lives revolved around going to bars or house parties, downing tequila shots, waking up with a mean hangover (and several regrets) only to do it all over again the next weekend, Gen Z is taking it easy on the alcohol intake as they come of age. While the younger gen is still up for meeting up and hanging out at bars or clubs, they’re more into practicing teetotalism, which is the act of completely abstaining from alcohol. In fact, a 2018 study found that respondents in their teens and early 20s were drinking over 20 percent less per capita than millennials did at the same age. Not only that, but 64 percent of Gen Z also revealed that they also expected to drink alcohol less frequently as they grew older.

Another study conducted by the University of Michigan School of Nursing found that between 2002 and 2018, the number of young adults aged 18 to 22 who abstained from alcohol increased from 20 percent to 28 percent for those in college, and from about 24 percent to 30 percent for those not in school. That means as Gen Z-ers were coming of age, consumption of alcohol was decreasing. The findings are particularly surprising in that age group, considering the fact that when millennials were coming of age, snagging a fake ID so you can go drinking and partying was a common—albeit frowned upon—rite of passage.

But why is Gen Z putting alcohol on the back burner?

Though it’s easy to assume that these Croc-loving and side-part hating youngins are turning their backs on yet another millennial trend, there are valid reasons they’re opting to skip out on drunken nights. For one, 38 percent of respondents in the GWI survey reported that the sheer taste of alcohol isn’t appealing to them. Another 20 percent also revealed that the cost of alcohol was a bit much for their wallets.

Additionally, multiple studies have shown that climate change is a primary concern for this environmentally-conscious generation, so the effect of producing alcohol and its impact on the environment cannot be discounted in Gen Z’s teetotalism. Also, as the older Gen Z-ers enter their college years or “real world”, it’s only natural they’re a bit more apprehensive to drink at social gatherings as spiking cases have seen a major uptick over the last few years. In the U.K., for example, drink spiking has been labeled an epidemic, with spiking-related incidents climbing by 54 percent from 828 in 2018 to a staggering 1,271 in 2021, reports iNews.

We also can’t overlook the fact that Gen Z-ers grew up with a keen awareness of how one’s drunken actions can be filmed, posted and live in internet infamy for the rest of their lives. Unlike millennials, who were sort of figuring out the law of the land as they were coming of age in tandem with social media, it’s only natural that Gen Z-ers are a bit more apprehensive about getting drunk and possibly getting filmed while under the influence.

Another contributing factor is the rise of low alcohol, low-calorie beverages. A study conducted by IWSR Drinks Market Analysis found that no- and low-alcohol drinks grew by more than 6 percent in volume in 10 key global markets in 2021, and have garnered 3.5 percent volume share in the industry. That means even if Gen Z-ers aren’t completely going teetotal, they also have more options than the loaded beers, spirits and wines millennials grew up with.

Bottom line: If you go to happy hour with a Gen Z-er don’t be surprised or offended when they only opt for a seltzer (spiked or plain) as opposed to the two for $15 margaritas.