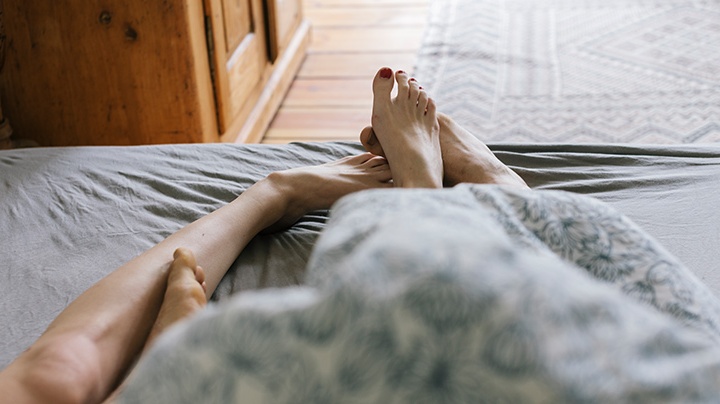 Getting turned on isn’t just about going below the belt. Found all over our bodies, erogenous zones are areas that have heightened sensitivity and, when stimulated, generate a sexual response of some sort. These “zones” differ in degrees of sensitivity, depending on the concentration of nerve endings. While some of these areas may seem obvious, like the clitoris, others, like your hair, are not so overt.

And since not all bodies are the same, what sets off fireworks for some might only cause a tingle for others. For example, some women can orgasm simply by having their nipples stimulated, while others are barely turned on by this kind of foreplay. So knowing where and how to touch and caress your partner (and yourself) is key. Here we break down the zones from head to toe—those commonly known and the under-the-radar ones—and explain how to stimulate them for maximum effect.

Thanks to plenty of nerve endings, the scalp can send instant tingles throughout the body. So give your partner a slow, sensual scalp massage, moving your fingernails lightly over the scalp, concentrating on the area behind the ears and above the neck. Also, running your fingers through your partner’s hair or giving their strands a gentle tug can create a rush of pleasure.

With more nerve endings than any other part of the body, lips are an obvious hot spot for not only kissing but also touch. Try running a finger or tongue over your partner’s lips before puckering up for a smooch. Or gently suck or nibble on their bottom lip for a sweet surprise.

Because of their sensitive skin and sensory receptors, ears can be sexual kyronpite for many folks. Knowing how to work this erogenous zone correctly is a must. Lightly kissing, nibbling, licking, and sucking their earlobes work, as well as caressing along the side. Plus, you can try gently blowing or breathing into their ears. Whisper sweet nothings or murmur some dirty talk for an added aural bonus.

Although we probably don’t need confirmation, according to several studies, the nape of the neck (that’s the base of your neck where your hairline begins) is highly receptive to touch. So much so that even women with spinal cord injuries can get turned on by neck stimulation. Plus, it’s a low-key area that you can tease in public. When your hands are wrapped around your partner’s neck, run your fingernails along the back of their neck to give them some tingly feels.

Also try softly kissing the sides and front of the neck while stimulating other parts of the body. Even simply breathing on their neck can do the trick. But don’t go all Twilight on them and start biting, unless they’re into that sort of thing.

Nipple stimulation ignites the same part of the brain as the clitoris and vagina, so don’t neglect this area. Depending on what you and your partner are into, everything from light touching to sucking, licking and even biting can be a turn-on. Plus, men consider their own nipples as a hot spot too, since they boast a lot of nerve endings.

Caressing the soft, fleshy insides of the upper and lower arms is a simple but often overlooked move that can create goosebumps in a good way. Lightly drag the tips of your fingers up and down your partner’s inner arms to drive them wild or slowly kiss this spot before, during and after the deed. This area also includes the armpits, which may seem, well, gross, but if done properly with a light teasing touch, it can go from tickle monster to titillating.

Along those same lines, the inner wrist can be an unexpected but very pleasurable spot. It’s where you’ll find the pulse point, making it highly sensitive. Simply graze this area with your lips, tongue or fingertips.

﻿Leo Season Is Upon Us, and Here’s What It Will Do to Your Sex Life

Part of the reason the navel and lower abdomen are so arousing is because of the anticipation. Your naughty bits are literally inches away but that doesn’t mean you need to go for the gold immediately. Use your tongue and fingertips, along with light kisses, to linger around the navel and stomach as a way to heat things up, making it a great foreplay move leading up to oral sex.

9. Small of the back

Ever have a man touch you on the small of your back and feel an electrical current course through your body? Or maybe the opposite effect, causing you to shout, “back off creep!” That’s because this area of the spine, besides being incredibly intimate, contains nerves that are connected to the pelvis, which can elicit an immediate response. Plus, being touched from behind makes you inherently vulnerable. To send shock waves through your partner, try tickling this area with your lips and tongue.

This area typically doesn’t get a lot of attention, which means it’s much more personal when your partner touches you here. Plus, this zone is packed with nerves so it’s extra sensitive to touch, especially because the thin skin behind the knee allows for easier access to those nerve endings. Try gently caressing your partner here or use your mouth and tongue to stimulate the area before moving up their thighs.

Similar to the inner arms, the fleshy inner thighs are sensitive. But unlike the arms, they’re super close to the genitals, which ups the arousal game automatically. Run your fingers down the front of your partner’s thighs, slowly moving your way inward and upward. Or work your way up using your lips, mouth and tongue.

Boasting over 8,000 nerve endings, the clitoris is extremely sensitive, to say the least, and stimulating it is generally the quickest, easiest way to reach orgasm. Through trial and error, you’ll be able to discover the right amount of pressure and the perfect tempo that gets you off. Use your fingers or a vibrator, with or without a partner, to practice. Plus, arousal causes your clitoris to swell, making it easier to find. So stimulating other erogenous zones before moving down south will help you climax even more. In addition, the pubic mound, located just above the clitoris, contains nerve endings that are connected to the genitals. By massaging this area you can indirectly stimulate the clitoris.

The interior of the vagina also contains nerve endings, particularly toward the entrance where there is a cluster of them. So while clitorial orgasms are more common, some women find deep stimulation inside the vagina can lead to intense orgasms. The “G spot” is believed to be located on the anterior wall of the vagina, but the jury is still out on whether it actually exists. It is thought to be an erogenous zone and may lead to female ejaculation. To give it a go, turn your finger upward toward the navel and perform a “come hither” motion. The cervix is also considered its own erogenous zone, usually stimulated by deep penetration (think doggy-style position). Plus, don’t forget about the outside of the vagina, which responds to light touch.

While this may seem like a no-brainer, there are parts of the penis that are especially receptive and could use a little extra attention such as the head, which is the most sensitive part with 4,000 nerve endings. The frenulum, the underside of the penis where the shaft meets the head, typically triggers orgasms, so keep that in mind during oral sex. And because the scrotum and testicles contain plenty of nerves that are hypersensitive to touch, consider gently massaging them.

Although one study found that feet didn’t really turn people on, you do you. Something as simple as a foot massage might be enough to stimulate you sexually, or try licking or even gently sucking on the toes if your partner is into it. You never know until you try.