I’m a Digital Wallflower…and Proud of It 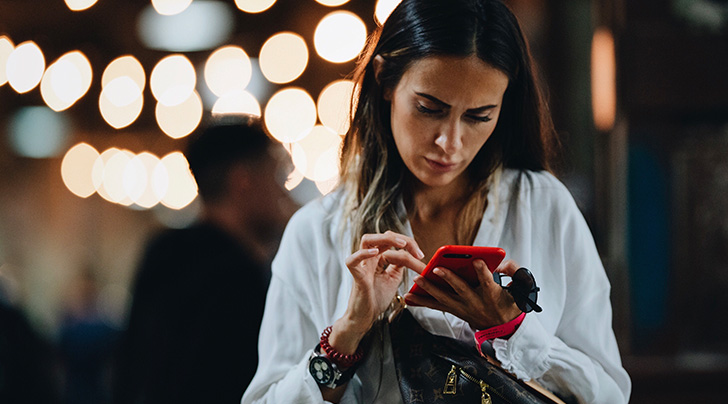 Born in the very last month of the 1970s, I am a card-carrying, textbook Xennial. Friends still makes merciless fun of me because I declared, during college in the year 2000, that the internet was a “fad” I’d decided to skip because “I don’t like video games.” While everyone else was IM-ing, I was in the suspiciously uncrowded campus library, using the Dewey decimal system to cull research material from microfiche and dusty books for my term papers. This is not a #humblebrag. This “good-for-them-but-not-for-me” mentality sealed my fate, technologically: I would spend decades behind the times, resisting the latest innovations until resistance proved futile.

I now have accounts on three social media platforms, which I mostly ignore. I do, however, voraciously consume news generated by the feeds of everyone from Kylie Jenner to the leader of the free world, often while walking my dog in the woods allegedly forest bathing. Media? I’m here for it. It’s just the social bit that gives me pause. I cannot compose a tweet without feeling like a rampaging narcissist. The idea of taking a selfie makes me more cringingly self-conscious than going to the ob-gyn (she’s the best!). I never post photos (no, not even on Facebook) of my kids—who I assure you are exceptionally adorable—for fear their future prospective employers may judge them for dressing up like ninja-lobsters at six. I’m not absolutely certain ninja-lobsters won’t be offensive in 2033. Are you?

It turns out there’s a term for people like me: “digital wallflower.” It was coined by journalist Shaunacy Ferro, who writes: “It’s impossible to extricate someone’s social media actions from the rest of their lives. Even though it has its fair share of posturing and image-control, in some ways, social media is one of our truest forms of expression—which thoughts we choose to send out into the world.” What does that say about someone who chooses to send out none?

I may be virtually invisible. But I also may be on to something. “Much of modern life, though seeming to promote connectivity, has had the opposite effect of fostering social isolation and loneliness,” writes Jane E. Brody in The New York Times. FOMO, she explains, can be fatal. “Internet and social media engagement exacerbates feelings of loneliness, depression and anxiety. People rarely relate intimate tales of misery and isolation on Facebook. Rather, social media postings typically feature fun and friendship, and people who lack them are likely to feel left out and bereft.” Misery loves company; empathy requires it. Instagram is not the first place I’d look for either.

I know this all makes me sound more like Andy Rooney than an Influencer. But I have no regrets yet. Life without social media at its center enables me to dodge my share of digital bullets: Zombie-ing. Venmo Stalking. Career-damaging faux pas (this essay notwithstanding) that end in “This account is now private.” But I’m living as a Luddite on borrowed time. If I want to maintain a transparent relationship with my children, I will have to get fluent—and fast. (And kids, if you’re reading this in 2033, I’m watching you.)

The average American child gets a smartphone at age ten. Even if I hold them off, their lives will be lived largely online; an inevitability that scares the living [insert poop-moji] out of me. Promotional materials for the documentary Screenagers reveal “the average kid spends 6.5 hours a day looking at screens” and that parents are struggling to enforce screen-free playdates. (Word to the wise: If the door is closed, they’re on the iPad.) Instagram will have more than 2 billion users in the next five years. It is already the top social network among teens, 94 percent of whom use social media. Leading psychologists report that excessive social media use is linked to “anxiety, depression, loneliness, attention deficit hyperactivity disorder, and addiction,” as well as a loss of productivity in education. As one told the The New York Times, the illusion of their peers’ “highly curated selves” leads college freshmen to grapple with unprecedented levels of loneliness. In her viral Atlantic article “Have Smartphones Destroyed a Generation?” author, psychologist and researcher Jean M. Twenge interviews a 13-year-old who tells her: “I think we like our phones more than we like actual people.” The stats are simply harrowing. “Rates of teen depression and suicide have skyrocketed since 2011,” Twenge writes. “It’s not an exaggeration to describe iGen [the generation shaped by the rise of social media] as being on the brink of the worst mental-health crisis in decades. Much of this deterioration can be traced to their phones.”

Silicon Valley executives, the very gatekeepers to the deliberately addictive worlds behind the shiny screen, vigilantly curtail their own kids’ access to social media. It’s on me to do the same for mine. I figure a good first step is leading by example. But even though I am mostly opting out, I already feel my kids’ future pain. I recently had a dear friend ignore several of my text overtures to get our families together, then was especially stung when I checked her feed and saw her hanging out with other, newer pals and their kids at the beach. Just like that, a friendship was damaged. Before social media, I would have just assumed she was busy. Which, of course, she was. Just not in the way I preferred. And that’s the problem. While “curated,” and in many ways illusory, social media robs us of our illusions when we need them most. Anyone who disagrees can @ me. I’ll probably never know.

We Dropped, Selfie’d and Stress-tested the Google Pixel 6a, so You Don’t Have To

HP Instant Ink Can Detect When Your Printer’s Low on Ink (And Send Cartridges Before You Run Out), but Is It Worth It?

8 Trends That Will Be Everywhere This Fall

If There's Any Amazon Fitness Tracker You Need, It's This One (And It's Under $50 Through August 6)

Need a New Laptop? This Is the Best Buy Chromebook Sale You've Been Waiting For