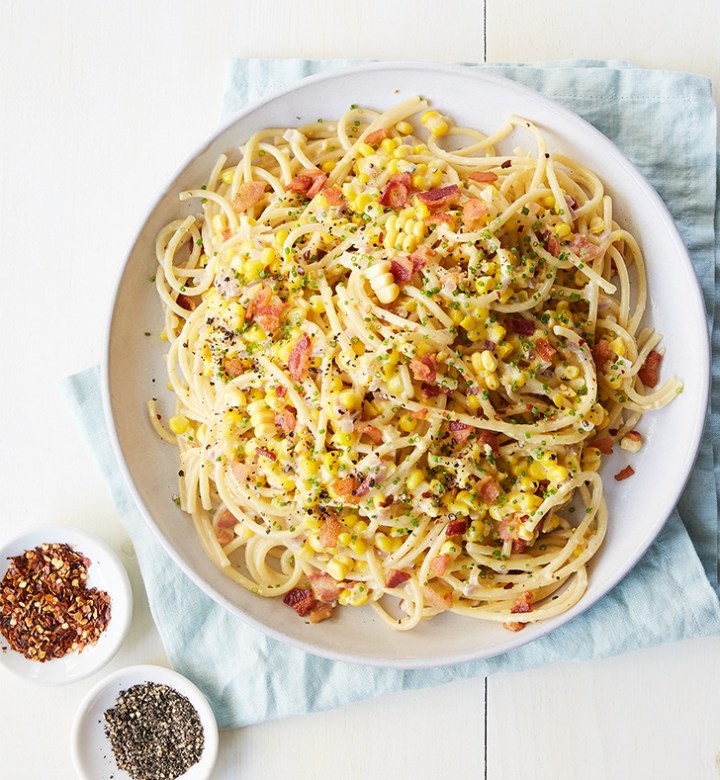 Imagine a plate of pasta that’s lusciously creamy, but not heavy. Sound like a contradiction? When you try this perfectly satisfying Spicy Corn Carbonara, you'll see what we mean. (And did we mention it's ready in under an hour?)

The Best Pasta Recipes in the Whole Entire Universe

16 ounces bucatini (or spaghetti or linguine)

1. Cut the corn off the cob with a sharp knife. Transfer kernels to a bowl and firmly scrape the knife against the cob to release any liquid. Discard the cobs.

2. Heat a large skillet over medium heat. Add the bacon and cook until the fat has rendered and it’s very crisp, 5 to 6 minutes. Remove the bacon from the pan with a slotted spoon and drain on paper towels.

3. Add the red onion and cook, stirring occasionally, until it’s tender, about 4 minutes. Add the corn and garlic and cook until the garlic is fragrant, about 3 minutes. Season with the salt and red pepper flakes and reserve over low heat.

4. Bring a large pot of salted water to a boil over medium-high heat. Add the pasta and cook until al dente, 8 to 10 minutes. Scoop out and reserve 1 cup of the pasta water, then drain the pasta.

5. Stir the pasta water into the corn mixture. Raise heat to medium and bring the liquid to a gentle simmer. Add the pasta to the skillet and toss to combine.

6. In a small bowl, whisk together the egg yolks and cream. Add to the skillet and toss well to coat. Add the Parmesan, plenty of black pepper and reserved bacon and toss to combine. Garnish with the chives.