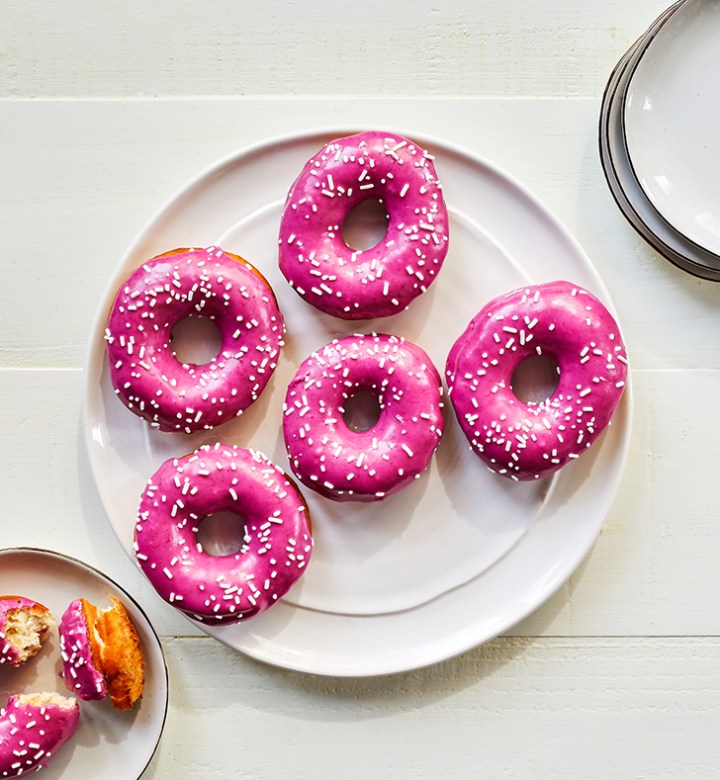 Raise your hand if you like cake doughnuts. Now raise the other if you like yeast doughnuts. Well, great news: Sourdough doughnuts are light as air on the inside and crisp on the outside—aka the best of both worlds.

Although the Concord grape glaze isn’t totally necessary, pastry chef Erin McDowell has a hot tip: “You can make the fruit glaze using any juice, but Concord grape has a beautiful color and a tart flavor that pairs perfectly with the soft doughnuts.”

Be right back, we’re whipping up a batch.

Neutral oil, as needed for frying

1. Make the Doughnuts: In a small pot, heat the milk over medium heat until it is just warm to the touch, about 2 minutes. The temperature of the milk should be about 95°F. (If needed, let it cool before proceeding.)

2. In the bowl of an electric mixer fitted with the dough hook attachment, mix the warm milk, sourdough starter, flour, sugar, cinnamon, yeast, salt, egg and melted butter on low speed for 3 minutes. Increase the speed to medium and mix for 3 minutes more.

3. Transfer the dough to a lightly greased bowl. Cover with plastic wrap and let rise in a warm place for 45 minutes. It may not double in size, but will look noticeably puffy.

4. Meanwhile, Make the Glaze: In a medium pot, bring the juice to a simmer over medium heat. Simmer until the juice reduces to 3 tablespoons, then transfer to a medium bowl to cool.

5. Whisk the powdered sugar and vanilla into the reduced juice to make a glaze. Cover and set aside.

6. On a lightly floured surface, pat out the dough until it’s about ½ inch thick. Use a doughnut cutter (or two round cookie cutters, one large and one small enough cut out the center) to cut out the doughnuts (reserve the holes for frying too). You can gently press the scraps back together a few times and cut more doughnuts.

7. Lightly cover the doughnuts on the floured work surface and let rest while you heat the oil. In a large pot, heat 3 inches of oil over medium heat to about 350°F. (If you don’t have a thermometer, you can use the doughnut holes to test the oil—they should begin to bubble and quickly rise to the surface, then slowly become golden brown.)

8. Line a baking sheet with several layers of absorbent paper towels and place a cooling rack over it. Fry the doughnuts a few at a time until they are golden brown on both sides, about 4 minutes per side.

9. Remove the doughnuts from the oil with a slotted spoon and transfer to the prepared rack to drain and cool slightly.

10. Dip the doughnuts into the prepared glaze and let sit for 5 to 10 minutes to allow the glaze to firm up.