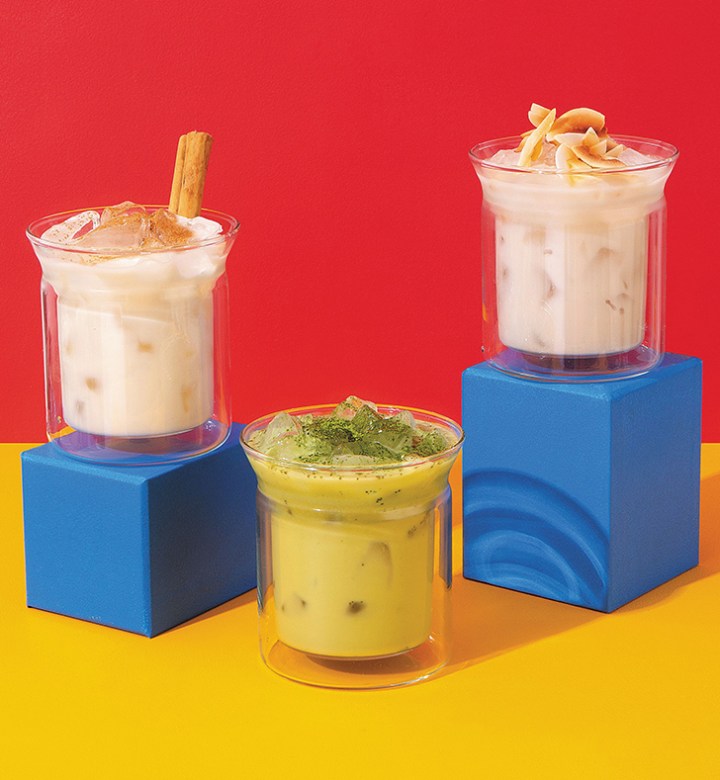 Once you’ve experienced the sweet, refreshing delight that is horchata, you’ll never want to sip on any other beverage. This recipe for the traditional agua fresca (Spanish for “fresh water”) comes from Esteban Castillo’s Chicano Eats and features two tempting variations.

“Horchata is the agua fresca that was typically in our fridge when I was growing up,” Castillo writes, “and back then I didn’t understand how something so delicious could come from uncooked rice. Although horchata de arroz has become synonymous with Mexico, it is a drink we adopted from Spain that can be traced back to Africa! My horchata is made by steeping rice, toasted almonds and cinnamon for a few hours before pulsing it in a blender with vanilla extract, and can be easily made dairy-free by using sugar or sweetened coconut milk to sweeten it.”

1½ sticks (about 4 inches each) Mexican cinnamon, broken in half

1. To Make Classic Horchata: In a dry skillet over medium-low heat, add the almonds and broken cinnamon sticks. Lightly toast just until the almonds start to turn golden brown and fragrant, about 5 minutes, stirring occasionally to make sure the almonds don’t burn. (You don’t want to completely toast them or they’ll overpower the flavor.) Remove from the heat.

2. In a large bowl, mix together the rice, almonds and cinnamon sticks, then pour in the hot water. Set aside to soak for 4 to 6 hours. (Make sure the water is hot to the touch but isn’t boiling; you don’t want to cook the rice.)

3. Pour the mixture (liquid and all) into a blender, and blend for about 30 seconds, then strain through a fine-mesh coffee filter (to ensure your horchata isn’t chalky or grainy) into a pitcher. Stir in the cold water, condensed milk and vanilla extract, then let chill for 2 hours in the refrigerator. Serve over ice.

4. To Make Matcha Horchata: Whisk together the matcha powder and 2 tablespoons cold water in a small bowl (adding 1 tablespoon of water at a time) to create a smooth slurry, then set aside while you follow steps 1 and 2. In step 3, stir in the prepared matcha when you add the condensed milk and vanilla extract.

5. To Make Coconut Horchata: In step 1, lightly toast the unsweetened coconut flakes along with the almonds and broken cinnamon sticks. Follow steps 2 and 3 as written. Once you’re ready to serve, whisk in the coconut milk and sweetened condensed coconut milk (this is to prevent any coconut fat from solidifying in the refrigerator). Serve over ice, garnished with toasted coconut.

Note: The classic and matcha horchata can also be made vegan by substituting the condensed milk for 1½ cups of your favorite milk alternative and using your favorite sweetener. Sweetened condensed coconut milk can be found at Whole Foods and Walmart, and on Amazon.