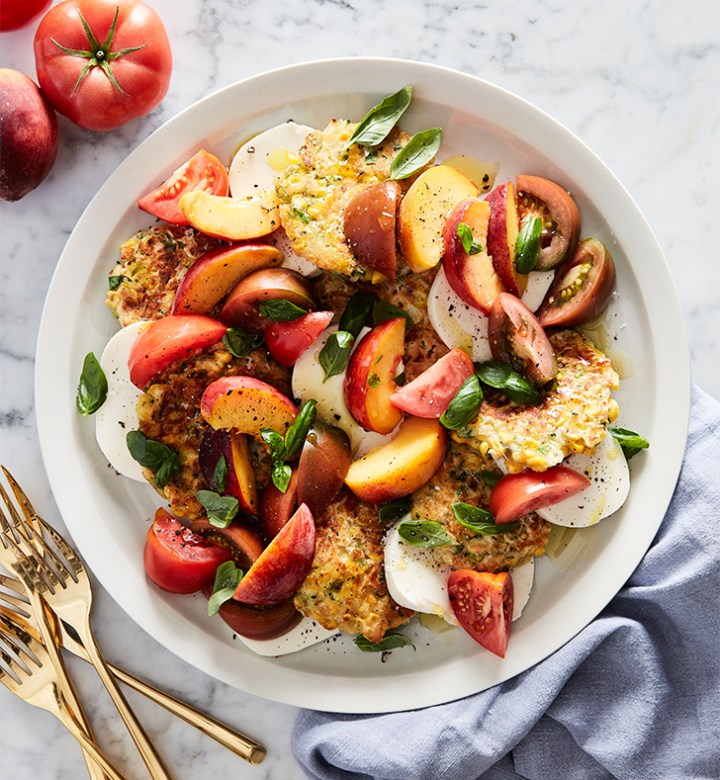 Our summer meals are defined by two things: corn and tomatoes. So recipe developer Erin McDowell, author of The Fearless Baker and the upcoming The Book on Pie, had the genius idea to combine them into one unbeatable dish. Behold the corn fritter caprese (with peaches and tomatoes, because summer).

“I love corn,” McDowell tells us, “and I’m always looking for new ways to cook with it in the summer. These corn fritters are something that I make a lot for a really simple dinner, but I’ve been playing around with making them into more of a meal. Usually, I just make the fritters and serve them alongside a salad, but I thought, ‘why not make the corn fritters part of the salad?’”

“The only thing you have to cook is the fritters,” she continues, “so it’s really easy. They’re quick to throw together, so you can make this on a weeknight. But it’s also beautiful because of all the colors, and it’s fancy enough that if you put it down at a dinner party, it would elicit oohs and ahhs.”

Be still our corn-loving hearts.

3 cups fresh corn kernels (from about 4 ears of corn)

1. In a large bowl, toss the scallions, corn, parsley, basil, salt, pepper and red-pepper flakes. Add the flour and baking powder, and toss until the mixture is well combined.

2. Add the eggs and half-and-half and then mix with a spatula until a thick batter forms. Fold in the mozzarella and Parmesan.

3. In a large skillet over medium heat, heat the vegetable oil. While it heats, line a baking sheet with paper towels.

4. When the oil is hot, scoop ¼-cup portions of batter into the skillet. You’ll need to work in batches, cooking just a few at a time. Cook until golden brown, about 3 minutes, then flip and cook until golden on the other side, about 2 to 3 minutes more.

5. When the fritters are cooked, transfer to the prepared baking sheet. Continue until you’ve used all the batter.

6. To assemble, arrange the corn fritters, tomatoes, peaches and mozzarella slices on a large platter. Sprinkle basil evenly over the top. Garnish with a generous drizzle of olive oil, flaky salt and freshly ground black pepper.