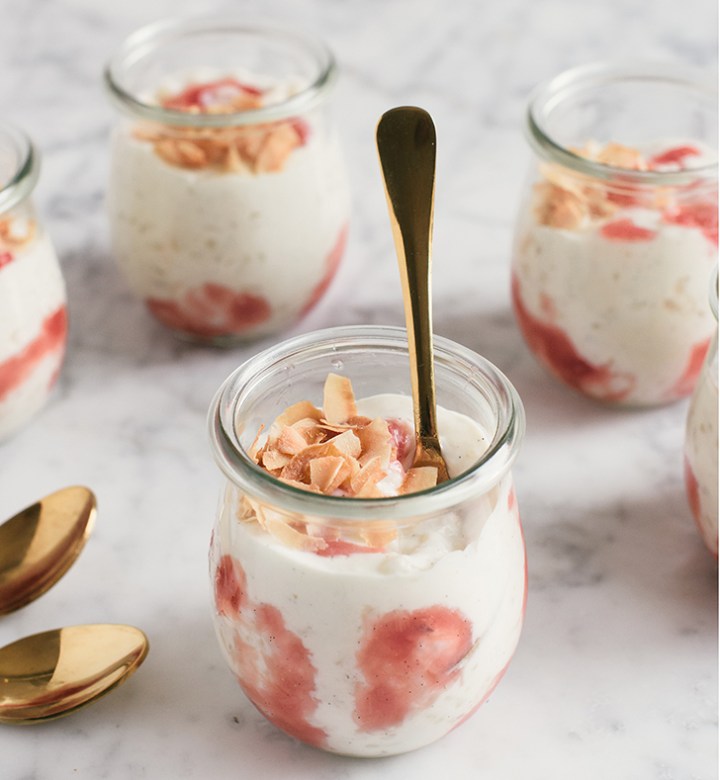 If you’ve only tried rhubarb in pie, it’s time to expand your horizons. The bright-pink fleeting spring stalks are equally fabulous in salads, sauces and all kinds of desserts. This recipe for coconut rice pudding with rhubarb compote borrows from the British tradition of pairing rhubarb with cream—instead of sugar—to counteract its bitter flavor.

In fact, this recipe uses three different types of milk to achieve supreme creaminess: whole milk, coconut milk and sweetened condensed milk. “Sweetened condensed milk is neat because it means you don’t have to add any other sweetener,” recipe developer Erin McDowell tells us. “It’s very easy to just dump everything and stir together. The rice pudding takes barely any time, and you can whip up a simple rhubarb compote while the pudding is setting up in the fridge.”

If you happen to be feeling ambitious, double the compote recipe and spread the leftovers on your morning toast.

2. Cook the mixture over medium-low heat, stirring often, until the rice is tender and the mixture thickens, 20 to 25 minutes. Transfer to a heat-safe bowl, place plastic wrap directly on the surface of the pudding and refrigerate until chilled, at least 1 hour.

3. Make the Compote: In a medium pot, mix together the rhubarb, sugar and vanilla bean seeds. Cook over medium heat until the mixture breaks down and becomes jammy, 10 to 15 minutes. Cool completely.

4. To serve, spoon the rice pudding into serving dishes and top with the compote.