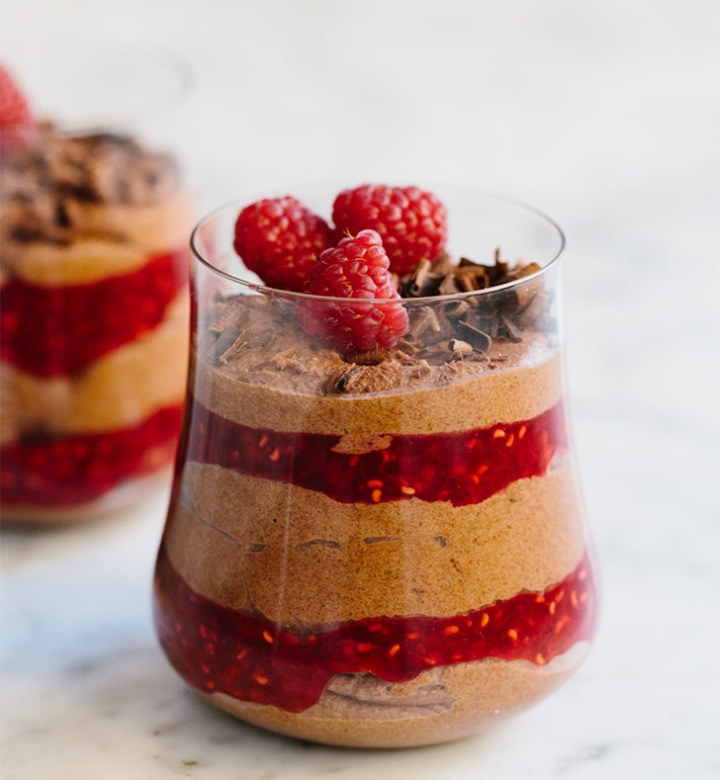 We’re sweet tooths at heart, but we don’t always have the time (or energy) to whip up a fabulous dessert for every occasion. Enter Erin McDowell’s chocolate raspberry fool, which is deceptively elegant and takes 25 minutes to make, start to finish.

“Whenever you’re like, I need dessert now, this is it,” McDowell tells us. “It’s like a fancy mug cake, but it tastes better and you don’t have to use the microwave. The texture is like mousse, but it’s just melted chocolate folded into whipped cream. The raspberry mixture is essentially a very simple homemade jam. You can make it with fresh or frozen raspberries, and if you are in a pinch and want to make this even faster, you could use store-bought preserves instead.”

The best part? It’s easy to make, “but it still looks fancy,” she continues, “so this would be great to make for company, especially if you’re someone who doesn’t love to make dessert.”

1. Make the Raspberry Swirl: Place the raspberries in a medium saucepan. In a small bowl, whisk ¼ cup (50g) of the sugar with the salt, cinnamon and vanilla bean scrapings to combine (if using vanilla extract, add at the end of step 3).

2. Add the sugar mixture to the raspberries and stir to combine. Heat over medium heat, stirring occasionally, until the berries break down completely, 6 to 8 minutes.

3. In the small bowl you mixed the sugar in, whisk the remaining ¼ cup (50g) sugar with the cornstarch. Add to the raspberry mixture, whisking to incorporate. Continue to cook, stirring constantly, over medium-low heat until the mixture comes to a simmer and thickens noticeably. Set aside to cool.

4. Make the Whipped Cream: In the bowl of an electric mixer fitted with the whisk attachment, whip the cream, sugar, salt and vanilla on medium-high speed until the mixture reaches soft peaks. Melt the chocolate until it is fluid (you can do this in a microwave in 15-second bursts or in a bowl fitted over a saucepan of simmering water).

5. Begin whipping the cream again on medium-low speed, and add the chocolate in a slow, steady stream. Mix just until combined. The mixture should still appear soft and smooth, like whipped cream. If it begins to seize or firm up, fold in the remaining chocolate by hand.

Note: To make chocolate shavings, use a clean, dry vegetable peeler to peel shards of chocolate from a bar or block. This works best when the chocolate is slightly warm. You can microwave it in 5-second bursts, but it should still be solid—not shiny or melted at all.