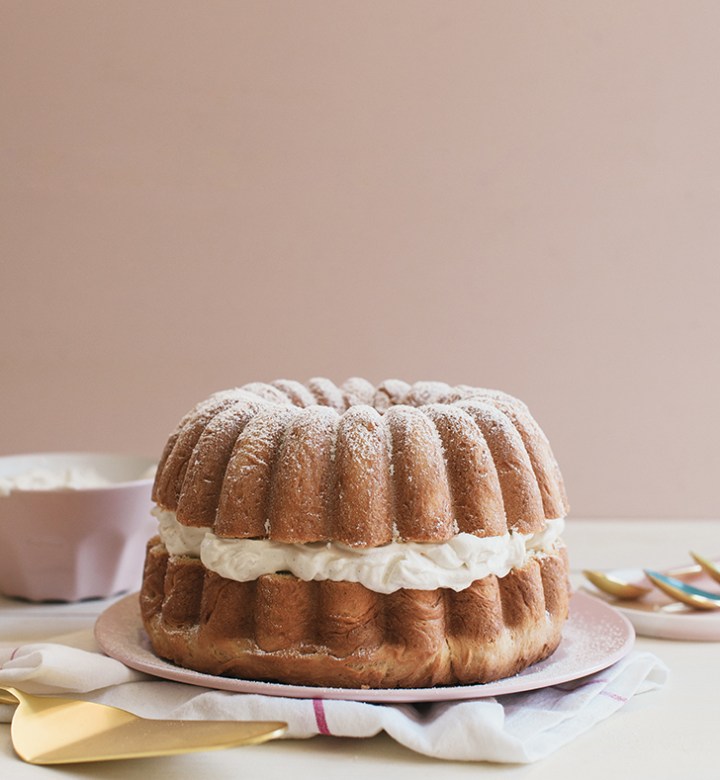 Cake is our weakness. We want to have a second third slice, but we know we’ll end up having major regrets (and a major stomachache). This light-as-air cardamom cream-filled Bundt cake is an updated twist on a classic yeasted Swedish dessert called semlor. Every bite is like eating a frothy cloud, so you can have as many pieces as your heart desires.

Erin McDowell, author of The Fearless Baker, chatted with us about her recipe. “The dough is either formed into buns or shaped into a ring before baking,” she explained. “Traditionally, the cake is scored to show people where to cut it. My version is much easier to shape because it’s simply baked in a Bundt pan. The results are impressive with minimal effort.”

We’re calling it: Swedish desserts are trending. Who’s ready for a slice?

1. MAKE THE CAKE: Grease a Bundt pan with nonstick spray. In a medium saucepan, heat the half-and-half over medium heat until warm to the touch (about 95°F). Remove from the heat.

2. In the bowl of an electric mixer fitted with the dough hook attachment, mix together the flour, sugar, yeast, cardamom, salt and nutmeg until combined. Add the half-and-half, vegetable oil and egg, and mix on low speed for 3 minutes. Increase the speed to medium and mix for 3 minutes.

3. Transfer the dough to a medium-size greased bowl, cover and let rise until about double in size, 30 to 45 minutes.

4. On a lightly floured surface, roll the dough into a ball. Flour the handle of a wooden spoon and stick it into the center of the ball. Use your hands to widen the center until it will fit around the center tube of the Bundt pan.

5. Cover the mixture and let it rise for 45 minutes, until the dough looks visibly puffy. Toward the end of the rise time, preheat the oven to 350°F.

6. Bake the cake until it is golden brown and reaches an internal temperature of 190°F, 30 to 35 minutes. Unmold from the pan and cool completely.

7. MEANWHILE, MAKE THE FILLING: In the bowl of an electric mixer fitted with the whip attachment, whip the cream, confectioners’ sugar, cardamom, orange zest and vanilla extract to medium peaks.

8. Cut the cake in half horizontally with a serrated knife and spread the filling on the bottom half. Place the top back on and dust with confectioners’ sugar.