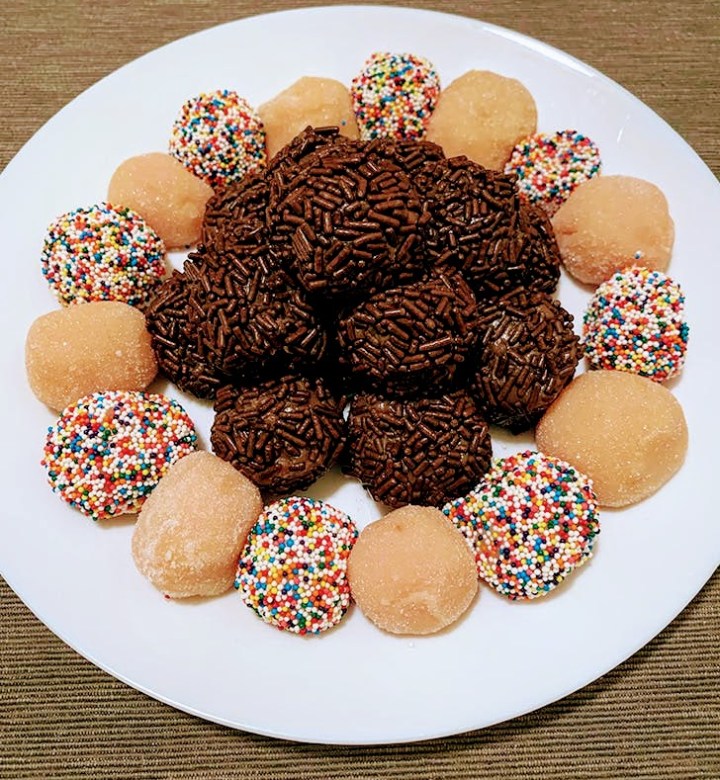 Haven’t booked that trip to Brazil yet? Don’t sweat it: Try this brigadeiro recipe instead. Translating to brigadier (aka someone who commands an army brigade), it’s a traditional dessert hailing from Rio de Janeiro. Its invention is linked to a brigadier’s presidential campaign in the 1940s. A woman who supported his candidacy created the cocoa-rich dessert as a promotional tool and called it doce de brigadeiro, or brigadier’s sweet. He lost the election, but the treat’s popularity stuck.

The original was made with cocoa powder, but we have it on good authority that lots of Brazilians actually use Nescau, a chocolate drink powder, instead. So, our version leans on chocolate milk mix. There are two ways to tackle this: You can keep it traditional by hand-rolling the mixture into tiny balls and coating them in chocolate sprinkles. Or, you can save time by skipping the rolling and sprinkles altogether and eat the mixture straight from the pan once it’s chilled (that’s called brigadeiro de colher, or spoon brigadeiro). The choice is yours. P.S., we also made a batch with strawberry milk powder in place of chocolate and rolled them in granulated sugar and rainbow sprinkles. They were nothing short of divine.

One 14-ounce can sweetened condensed milk

2 tablespoons salted butter, plus more for rolling (unsalted is fine too)

1. Add the condensed milk and butter to a medium saucepan over low heat.

2. Once the butter starts to pool, add the chocolate milk powder.

3. Stir gently and constantly for 10 minutes with a whisk or wooden spoon until thick and fully combined. Don’t let the mixture reach a boil, but a few bubbles are fine.

4. Remove from heat once you can push your whisk or spoon through the middle of the mixture and see the bottom of the saucepan.

5. Let the mixture cool for about 5 minutes. Pour the mixture into a heat-safe, flat container. Cover and refrigerate for 45 minutes to 1 hour. The cooling time will vary based on the depth of your container. If you’re choosing not to roll your brigadeiro into balls, it’s ready to eat with a spoon straight out of the container once it’s cool.

7. Pour the chocolate sprinkles into a dish. Roll the brigadeiro balls into the sprinkles until they’re evenly coated.