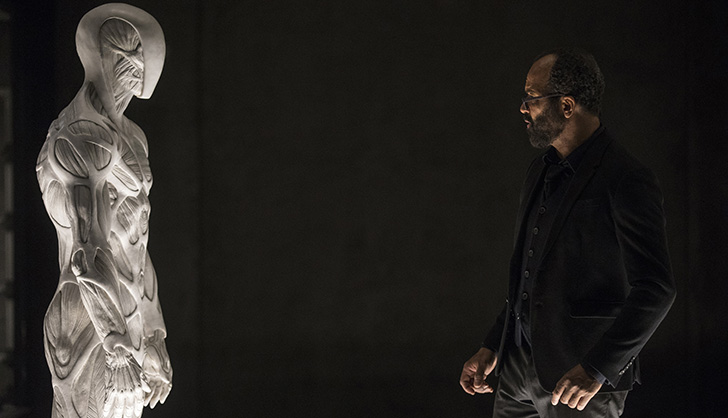 No show likes to keep you on your toes quite like Westworld. After a yearlong break, we open season two with a tête-a-tête between Dolores (Evan Rachel Wood) and Bernard (Jeffrey Wright). Or is it Dolores and Arnold? Does it even matter? Bernard tells Dolores he had a dream where the other hosts left him behind, but when she asks what it means, he tells her dreams are not real—they are just noise.

But are they, or are they memories? We flash back to humanity’s worst nightmare, the massacre at the end of season one where Dolores and her fellow hosts turn a gala night into bloody carnage. And suddenly we cut to Bernard, washed up on a shore, with four machine guns pointed at him. Confused? Us, too.

Right in the nick of time he’s saved from a certain death by Stubbs (Luke Hemsworth), who obviously hasn’t been clued in on Bernard’s robot status. Stubbs tells the aggro security people that Bernard’s the boss, and good thing too, because as we pan across the beach, the hosts from the Wild West are washing up and all consequently being executed. 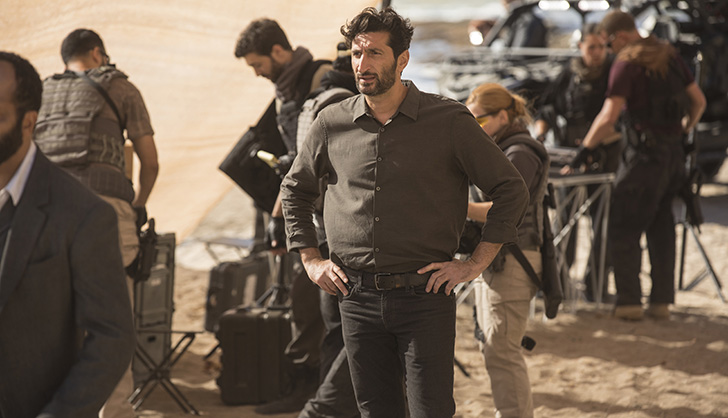 New (to us, at least) Westworld tech expert Antoine (Swedish actor Fares Fares) digs through the mushy brain of a Native American host to retrieve his last memories and sees Dolores at the end of a barrel telling him not everyone deserves to make it to the valley beyond. What confuses the programmer, and the guy tasked with investigating this royal mess (fellow Swede Gustaf Skarsgård—yes, son of Stellan, brother of Alexander) is how the sugary, innocent welcome wagon of Sweetwater has managed to change her character profile.

However, it happened. It’s sweet, sweet irony. Whether the deadly VIP gala is revenge of the bots or Ford’s (Anthony Hopkins) warped final narrative, there’s something joyful about watching Dolores and Teddy (James Marsden) ride through the fields of Westworld, hunting the humans who degraded them for so long. 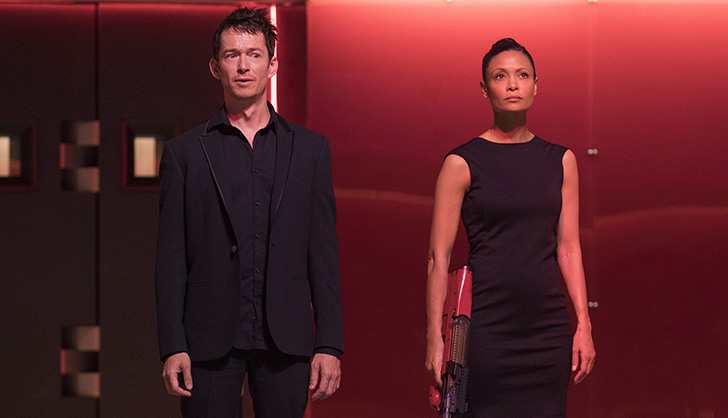 While we’d love to revel in retribution, it’s possible that Dolores isn’t purely driven by revenge as much as programming. She is still a mix of ranger’s daughter and Wyatt, the murderer profile implanted by Arnold. But as she leaves three humans dangling by nooses from a tree, she defiantly announces she’s evolved into something new and the one role she’s yet to play is herself.

In the lab, Maeve (Thandie Newton) runs into the guy who tinkled on the Westworld map in season one. Ever the charmer, he recalls Maeve’s good looks going to waste as a homestead girl with a family, thinking she (or, more likely, he) would be much better served if she ran the Sweetwater brothel. He condescendingly tells Maeve her daughter is not real. “Not real?” Maeve stares down this weasel with the look of a velociraptor. “Am I not real?” She feels awfully real. 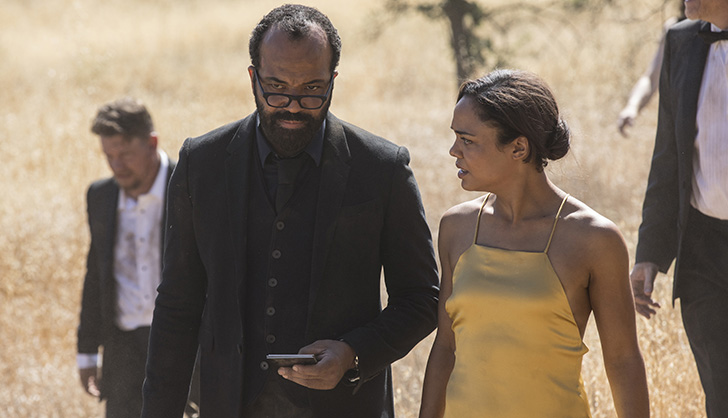 In Westworld, Bernard, Charlotte (Tessa Thompson) and some random guests run into a clever trap featuring two dead hazmat guys. Angela (Elon Musk’s ex-wife, Talulah Riley) is behind it, violently enforcing the rule that if you didn’t know a character before today, they’re probably not making it past the hour. Bernard thinks they’ve reached a dead end, but Charlotte knows of another way out of the park. She takes Bernard down to the lab where she has a cryptic online conversation about delivering a package. Is Bernard the package? Or is she lying to get out of there? No one’s being rescued until this “package” is retrieved, she tells him. And the lives of anyone in the park mean nothing unless they get it. Human life…so precious.

Though he’s experiencing a terminal malfunction, Bernard starts tracking Peter Abernathy (Louis Herthum), the decommissioned host who carries this invaluable information, while injecting himself with robot juice. Good multitasker, that one. 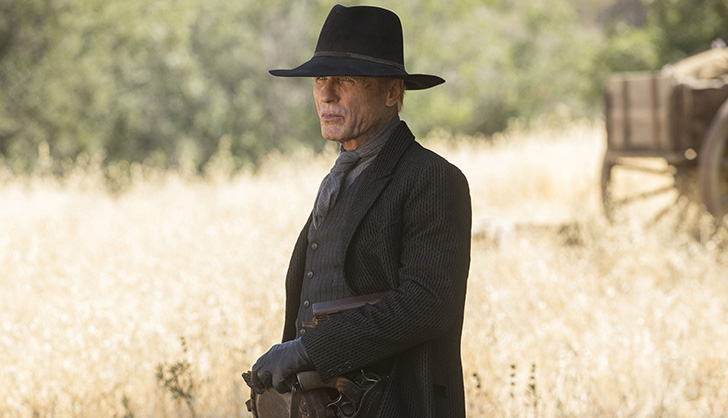 Not everyone’s unhappy with the sitch. The Man in Black (Ed Harris) finally got what he always wanted: a Westworld with consequences. The game is now reversed. It starts where he is standing and the goal is to get out. After a creepy child host explains the new rules to him, William (Jimmi Simpson) blows a hole through the kid like the gentleman he is.

Ever philosophical but not programmed to be clever, Teddy still doesn’t know who he’s fighting or why. He questions the mission of just riding around whacking people. When Dolores reassuringly says the one constant in her life—through all the good and bad—is him, he asks that they go look for a quiet corner of the world where they can live out their days together. But Dolores wants something greater. She wants to exact revenge. “The story ends with you and me,” she tells Teddy, promising she will show him the truth. If Teddy was programmed to shrug, that’s what he would have done. “OK. Cool, cool.” 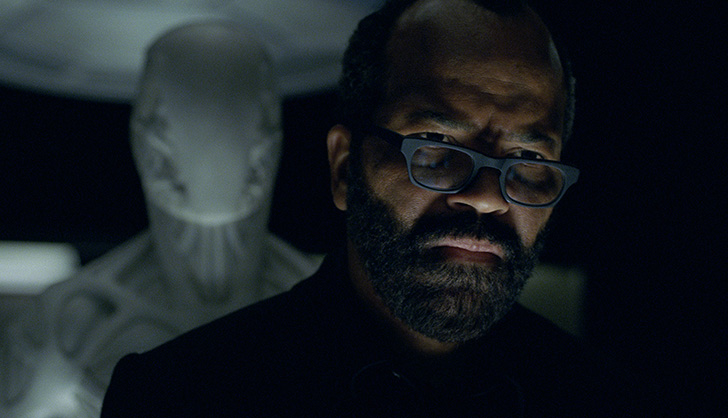 Back in the present, Bernard and the new folk enter Sweetwater and are greeted by something out of a Walking Dead episode: dead bodies everywhere—hosts, humans, a decomposing Dr. Ford with maggots chomping on his eye. Their journey continues lakeside, where a Bengal tiger has washed up ashore, which is a mystery no one seems capable of answering. On their fancy, futuristic iPads, they can see that all the hosts have clustered together in one place, but what they come to discover is a one-two punch of really effed-up information. 1) Westworld suddenly borders a sea that no one can explain, but more important, 2) The clustered hosts are all floating in it—and Bernard says he killed them. ALL of them.

Why and how did Bernard kill all the hosts? Is Dolores exercising free will or is she programmed to exact revenge? Will Teddy ever get it? And while all this is important, give us more Maeve!

Everything You Need to Know Before Watching ‘Westworld’ Season 2