Tonight’s episode of True Detective picked up right where we left off: in the midst of Julie Purcell’s investigation. Here’s what went down in season three, episode four of the HBO series. 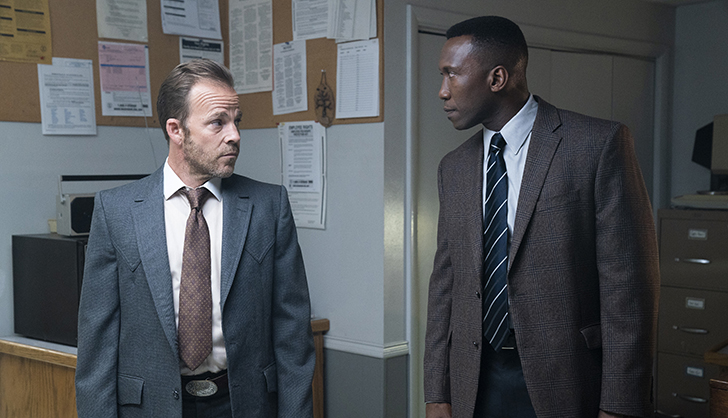 To get to the bottom of Will’s first communion photo, Wayne (Mahershala Ali) and Roland (Stephen Dorff) visit St. Michael Church of the Ozarks to get the scoop on his pose.

The priest says he’s the one who took the communion picture of Will with his eyes closed, without offering further clues to why Will closed his eyes for the pic. He also tells them Julie told him she was excited to see her aunt—only she doesn’t have an aunt. While he doesn’t recall what name she used for this aunt, he does recognize the dolls as made by “Dear, good” Patty Faber, who makes them for the town’s fall fair.

As Wayne and Roland drive over to Patty’s, they discuss what they’ve just discovered. Roland wonders if maybe this “aunt” never wanted Will in the first place, only Julie. 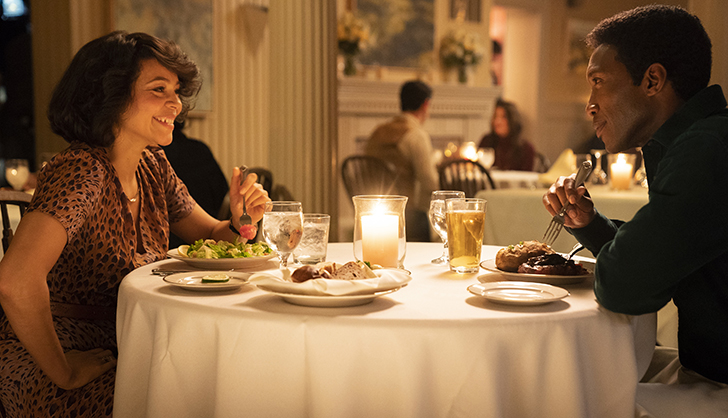 In 1990, Wayne is pretty chuffed about having been named special investigator, but Amelia is unimpressed after having been put down for her efforts to further the case.

“I’m happy for you, the way you were happy for me the other night,” she mutters, while continuing to take her aggression out on the laundry.

It seems this case is a constant source of tension between the two, as a result of the book. “I’m sorry I haven’t expressed better how inadequate and useless I’ve been made to feel,” is Wayne’s crappy non-apology to his wife. The two are at it, loudly, aggressively, but somewhere deep down there is still love between them, as evidenced by the angry sex they have, that even makes their kids smile knowingly.

Dear Patty recalls selling ten of her dolls to a black man with a dead eye, so 1980s Wayne and Roland go looking for the man with the dead eye, and sure enough, the liquor store owner knows who he is. They go visit said man in a trailer park off Central Avenue, but this man—who it seems has nothing to do with the Purcell kids’ disappearance—is not appreciative of their drop-in. Instead, he riles up the crowd, and Wayne and Roland drive away with a broken windshield.

In 2015, we find out that Wayne’s son is a cop, too, and Wayne wants him to look up some people from the old investigation. But what he really needs is to find Roland, with whom he has lost touch—again.

In 1990, District Attorney Gerald Kindt (Brett Cullen) is now State Attorney General and is still set on putting down Wayne. Wayne does not bite when it comes to the blatant condescension, nor are he and Roland game to follow their orders in upholding the conviction for a man they now believe is innocent. As the former partners come to a quiet understanding, we see Roland limping as they exit the office. 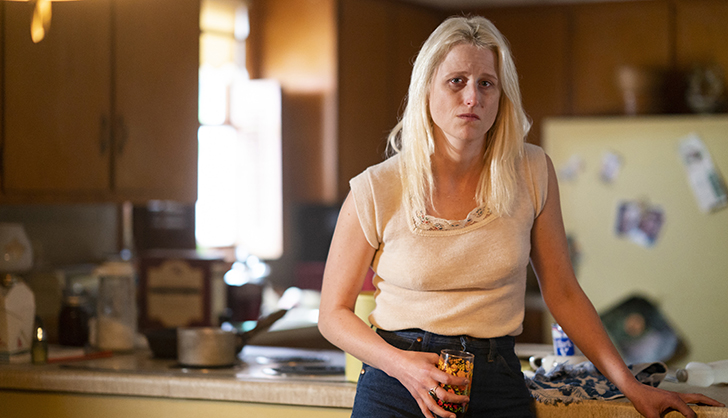 In 1980, Wayne and Roland return to church to get more information from the congregation. While the priest tries to coax Wayne into giving a confession of his own, Roland tries his hand at flirting with Ms. Lori (Jodi Balfour), telling her faith is one of the most important things there is. (Enter eye roll. But well played, Roland.)

Wayne goes for his first real date with Amelia, who really knows how to make small talk. First up on the agenda, she asks if Will’s death could have been an accident. They switch the topic of discussion to her time in California, and Amelia confesses that she used to be something of a mess. Wayne takes it in stride, telling her he’d like to pretend to be normal with her for as long as he can. And then they promptly launch into murder investigation talk. Amelia points out giving the kids toys implies they have affection for them. Wayne says that people who hurt kids think of themselves as having affection for children. These two try to be normal again, by switching over to talking about family. Eventually, the awkwardness turns sexy and flirty, and we know Wayne is gonna get lucky.

Roland decides to pay a visit to Sawhorse, the bar where Lucy (Mamie Gummer) works. There, he finds Tom on the floor of the backroom with a bloody nose, which is how we assume most of Tom’s violent tantrums end. Roland drives him home, stewing as Tom makes racist remarks about Wayne, but while Tom is a small-minded alcoholic jerk, it’s hard not to feel for him when he says he can’t exist in his own house because every inch reminds him of his kids. Roland offers him his couch. 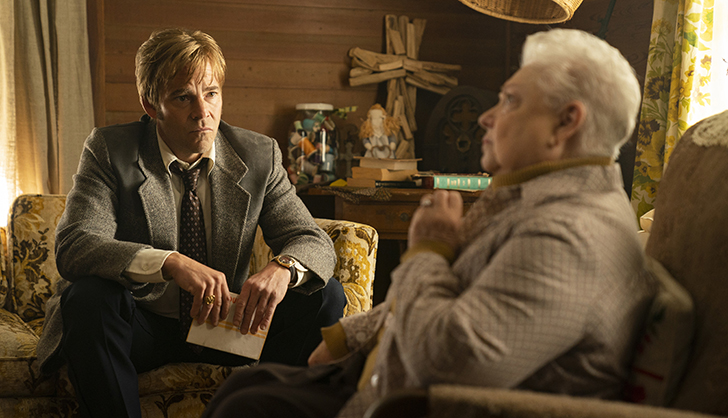 In 1990 the investigation is reopened and we outline the facts as follows: Julie, if alive, is currently 21. Lucy ODs in 1988 outside Vegas. No one knows where Cousin Dan is.

Old Wayne goes to see crime show director Eliza, who has two wine glasses on her bedside table, despite claiming to be alone. While he’s ready to show his cards, he says she has to show hers as well. Why are they making this show now? What does she know about Julie? Eliza pulls out a folder and shows him a picture of a skeleton found in a quarry in Missouri—the remains of Dan O’Brien, who went missing in 1990 after briefly resurfacing. Eliza says she can’t show her cards yet but says that what she has is not on him.

In 1980, they find prints on the bike—and they belong to Freddie Burns.

Amelia gathers up Will and Julie’s stuff from school and takes it to Purcell house. She’s met by an inebriated Lucy, who tells her she has the soul of a whore. Amelia tells her we often hurt ourselves because we think we deserve to be hurt. “This wasn’t a very happy home,” says Lucy. “Children should laugh.” Lucy seems to think she’s done some really horrible stuff, running around on Tom chief among them. “What kind of woman hates the only things that’s showed her love?” snaps Lucy. “I have done some terrible things.” When Amelia suggests she speak to Wayne about this, Lucy turns aggressive and throws her out of the house. 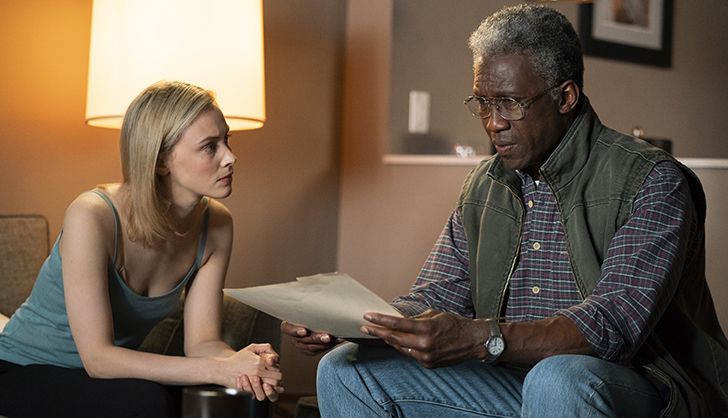 In 2015, an agitated Wayne hallucinates about the Vietcong. He says, to himself, that he needs to tell Roland about Dan O’Brien. He looks out of the window and sees a black car surveilling him. But is it part of his hallucination or real?

In 1980, all three kids in the Beetle have been taken into the police station. When threatened with life imprisonment and the gas chamber, Freddie sings like a canary. He claims he didn’t kill the kids, but he did shove Will, who he says was looking for his sister, chased him off and stole the bike. Wayne and Roland push Freddie a little harder and the 18-year-old dissolves into drooling sobs.

In 1990, Wayne is obsessively going through videos of the Walgreens where Julie’s prints were found. He sees something. Rewinds. Watches it again. Pauses. It’s Julie. She’s alive.

Back in 1980, Brett “Trash Man” Woodard is about to get beaten up again by the town folk. They don’t appreciate him trolling for cans from their children. Trash Man runs back to his property, where he set up a giant booby trap, and he’s waiting for all of them with loaded guns (that’s what was in the green duffel bag) positioned in every nook and cranny of the house. The last thing you see is an angry man kicking in the door, but although the screen cuts to black, the sound of an explosion tells us everything we need to know for now.

Is the priest hiding something? And what are the “terrible things” that Lucy is talking about? Guess we’ll have to wait until True Detective returns to HBO next Sunday, February 3, at 9 p.m.