‘This Is Us’ Season 3, Episode 10 Recap: The Good, the Bad & the Election Results

When we last checked in with the Pearsons before the dreaded one-month season hiatus, things were definitely in flux. Kate (Chrissy Metz) was saying goodbye (from the other side) to her Adele-a-gram gig and giving college a try. Randall (Sterling K. Brown) was devastated to learn he’d lost the election before it was over, and Kevin (Justin Hartley) found out his Uncle Nick (Michael Angarano) is potentially alive. How could things get any more complicated? Welp, you’re about to find out.

Here’s what happened in season three, episode ten of This Is Us. 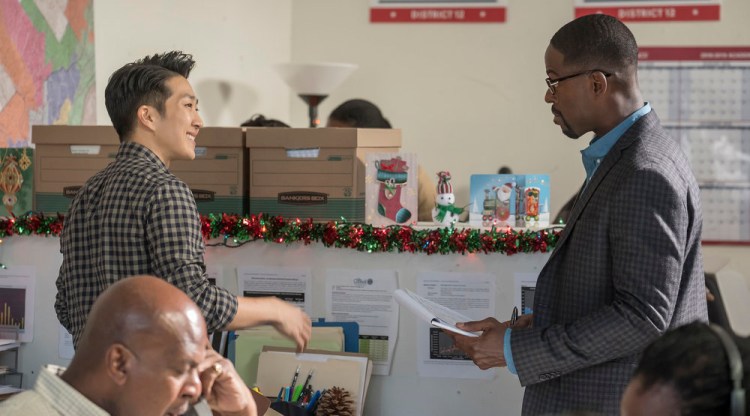 With seven weeks left until election night, Randall is still sleeping on the couch and Beth (Susan Kelechi Watson) is still not on board with him continuing his council race because of Tess’s (Eris Baker) recent confession that she’s gay. She thinks they need to regroup as a family, but he’s not ready to give up on his new-ish dream. And, lest we forget, Randall is not a quitter.

We flash back to teenage Randall (Niles Fitch) and Jack (Milo Ventimiglia) on their visit to Washington, D.C.’s Vietnam Veteran Memorial. Randall opens up about his fear that he won’t be able to balance his career and a family when he’s older. Interesting, since that’s precisely what he’s struggling with when we jump forward to five weeks before the election.

The taxing demands of campaign life are weighing on Randall and we notice similarities to the last time he had a breakdown. When Sol Brown (Rob Morgan) mentions Randall’s lack of family presence at church during a radio show, it hits him hard. So when he goes home later, he tells Beth it’s time she and the girls start showing up to events again to show a united front. She shoots back that maybe he isn’t the family guy he perceives himself to be. So he brings out the big guns and hits where it hurts: “Are you really mad at me, Beth, or are you mad that I have something I care about and you don’t?” Beth leaves the room before she says something she regrets.

On New Year’s Eve, Randall is getting ready to go meet his family for their annual “boo-berry” pie celebration when Jae-won (Tim Jo) tells him he’s found the smoking gun they need to win this election. Turns out, Sol Brown got a DUI and paid off the police to cover it up. Jae-won pressures him to publish it first thing the next morning, but all Randall has on his mind is trying to repair the void with his wife with some pie. 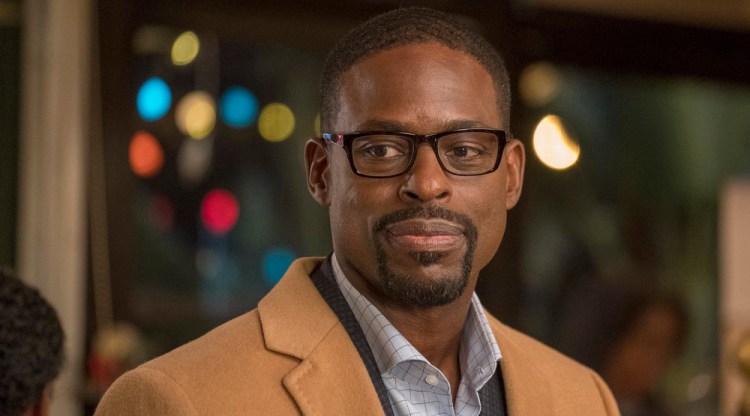 But when he arrives at a diner, there’s (of course) no blueberry pie available for purchase. The church pastor happens to be there and asks what’s wrong. Oh, nothing, Randall explains, he’s just wondering if he’s about to go down in history as the worst husband ever who also happened to lose an election by a landslide. The pastor, thankfully, helps turn his frown upside down.

When Randall goes home he delivers a Jack Pearson–esque monologue and apologizes for being absent. Then it’s boo-berry time.

The next morning, Randall skips church and sleeps in. Beth wakes him up and reminds him of a time when they first started dating and went shoe shopping together. She admits it was the first time she thought, “I might marry that man.” With that, she gives her blessing for him to continue campaigning and says they better get to church. And it’s a good thing they make it to Sunday service because the pastor delivers a rousing sermon about how Randall is “fundamentally good” and how the community will be in capable hands with either him or Sol on city council.

On election night, despite Jae-won’s assertion that Randall was too far behind to pull through, the race is close. Beth is tense and Zoe (Melanie Liburd) says it’ll all be over soon—but looks at Kevin when she says it. Uh oh.

The numbers are being counted slowly and they won’t have the results until after midnight. Randall thanks everyone for their dedication and tells them all to get some much needed rest. Later, in bed with Beth, he muses about what his father would think about how his life has turned out. Then, he receives a call. He won the election. 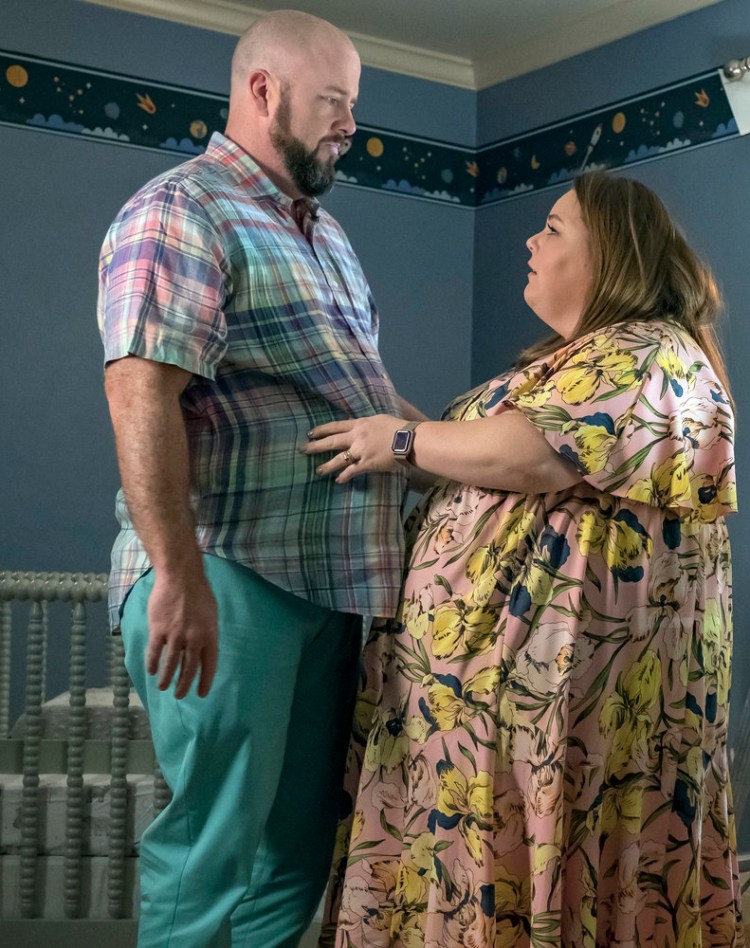 With Katoby’s baby the size of a lime, they feel it’s the right time to start setting up the nursery. So they start cleaning house and making room for their new addition. It’s going great—until Kate accidentally gets rid of Toby’s (Chris Sullivan) complete set of Star Wars figurines.

Amazingly, Kate is able to track down the dude who purchased them from the donation store. On New Year’s Eve she goes to his house and asks to buy them back. He says they’re “priceless” even after she offers him lots of money. So she switches tactics and says she’s pregnant and all of her childhood memories (and father) were lost in a devastating fire. The only things she had to give her child were the 40-year-old figurines Toby saved for him. She asks if that’s how he wants to spend his NYE, disappointing a sad pregnant woman, and he just says sorry and walks away. Brutal.

So on New Year’s Day, Kate tries a Jack Pearson move of her own and attempts to buy some more Star Wars memorabilia on eBay for Toby. She surprises Toby with her new finds and tells him that he will be their son’s favorite thing, not some toys. Then, it’s off to try to win an “original Boba Fett.”

On election night, Kate is watching the numbers pour in from afar when Toby calls her into the newly painted nursery. But the new blue walls aren’t the only heartwarming thing about it. Toby worked with a dollhouse maker to recreate one of Kate’s most cherished childhood belongings, a toy football stadium Jack gave her. He tells her she is going to be their child’s favorite thing and she cries all the happy tears. 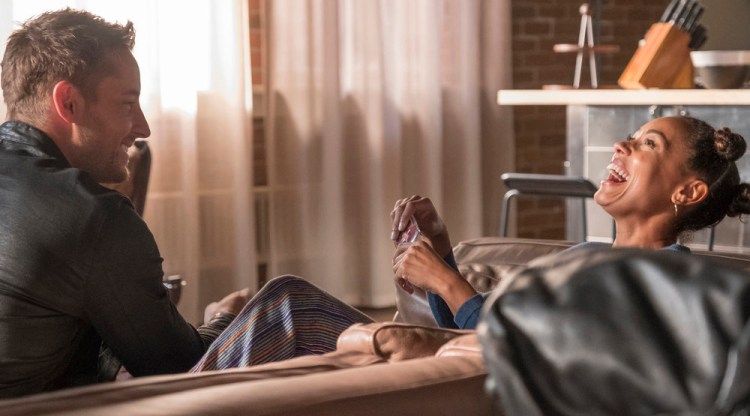 Fresh off their Vietnam trip, Kevin invites Zoe to move into his loft by giving her a key (with a John Stamos key chain). Surprisingly, she accepts.

Later, they head to the VA office to get information about his Uncle Nick, but the woman who works there says she can’t give him any details unless he has proof he’s next of kin.

Zoe mentions that she used to date a congressman and is sure he can whip up an official document that’ll get the job done. When Zoe, Kevin and the congressman meet, it’s clear the wound of their breakup is still fresh—at least for him. He alludes that Zoe dumped him over email, then catches himself and says he’ll see what he can do for Kevin. Things get so awkward that when the congressman leaves, Kevin asks what happened. It was serious, so much so that they planned to move to New York together, but, yep, she broke up with him over email. She shares this information in such a blasé way that Kevin seems worried.

When Kevin receives the file of intel on his uncle, he’s frustrated to learn the last recorded trace of Nick was when got medevaced out of Vietnam and put in a psych ward. Although Zoe finds it cheeky that he signed his discharge paperwork “Clark Kent,” Kevin is frustrated and asks if she’s ever going to unpack her boxes or if he should expect an email. They argue and at the end of it, Zoe says she needs some space. 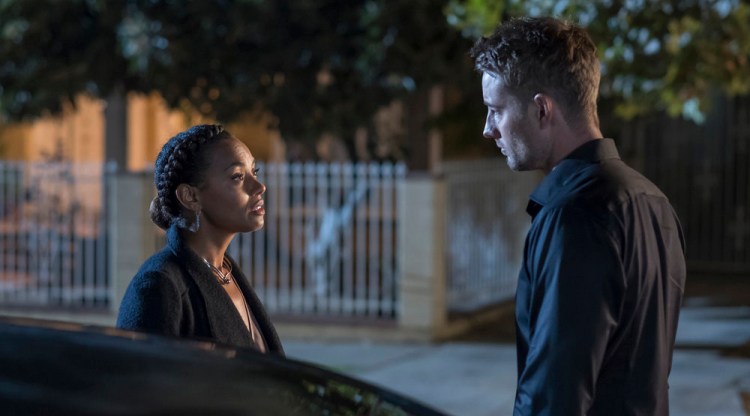 On election night, they see each other from across the room. Unfortunately, after their short-lived effort at cohabitation, Zoe feels unable to continue their relationship. So, she ends things.

But when she sees Kevin leave the event, she feels the need to follow him. She’s clearly had a change of heart and tells him he’s one of the only people who knows about what her father did to her when she was young. She explains that it’s harder for her to give up her “safe space” than most people, and while she does want to live with him, it’s hard for her to open up. Nonetheless, she likes what he’s pushing her toward, she loves him and she wants John Stamos back (the key, not the devastatingly handsome man). They go home, and in perfect rom-com fashion, they unpack her literal baggage together.

During this sweet moment, Zoe accidentally unpacks one of Jack’s old boxes and finds a postcard from “C.K.” Kevin realizes that it’s from his Uncle Nick (aka Clark Kent) and that Jack knew he was alive all along. Luckily, there’s a return address. Dun, dun, dun!

Next Tuesday, January 22, at 9 p.m ET/PT, we peel back the onion that is Uncle Nicky with season three, episode 11.