It's not often that we get personally signed messages from a royal, and especially from Queen Elizabeth II herself. However, the royal family just recently shared a letter that the queen wrote to the Emperor of Japan, Naruhito, following the assassination of the former Prime Minister of Japan, Shinzo Abe, on Friday.

The message was shared to the royal family Instagram, along with a caption that read, “Her Majesty The Queen has sent the following message of condolence to the Emperor of Japan, following the death of former Prime Minister of Japan, Shinzo Abe.”

In her note, Queen Elizabeth said, “My family and I were deeply saddened to hear the news of the sudden and tragic death of former Prime Minister, Shinzo Abe. I have fond memories of meeting Mr. Abe and his wife during their visit to the United Kingdom in 2016.”

She continued, “His love for Japan, and his desire to forge ever-closer bonds with the United Kingdom, were clear. I wish to convey my deepest sympathy and condolences to his family and to the people of Japan at this difficult time.”

Her Royal Majesty then signed the end of the message, “Elizabeth R,” which is how she typically signs the end of her letters and how she indicates that she wrote the message herself.

Abe served his first term as Prime Minister of Japan from 2006 to 2007. It was during his second term, from 2012 to 2020, that he made the visit to Buckingham Palace which Queen Elizabeth references in her letter. In a series of photos that were taken from the visit, the queen is seen standing alongside Abe and his wife, Akie (as seen below). 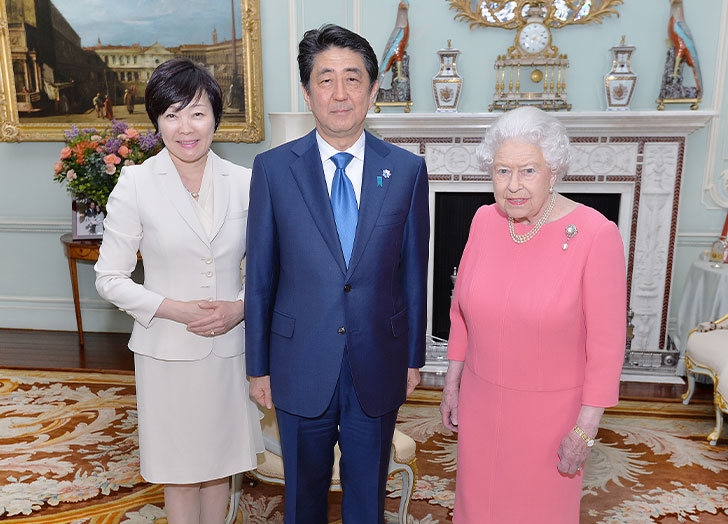