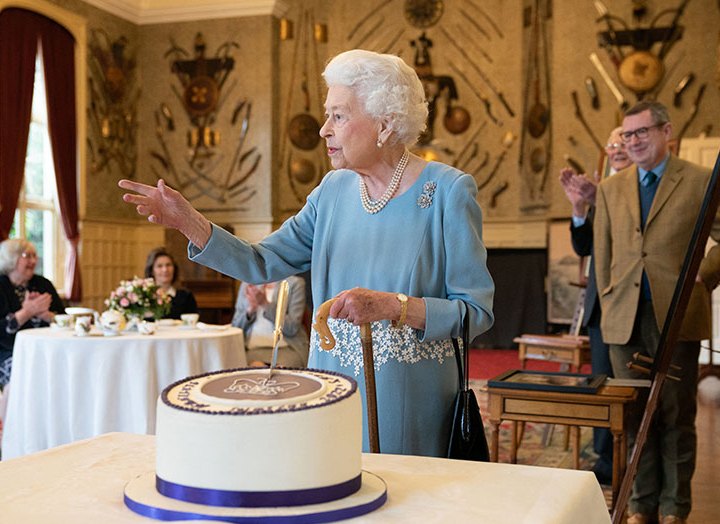 Queen Elizabeth is honoring her late husband, Prince Philip, with a special accessory.

The monarch recently hosted a reception at the Sandringham House in the wake of her Accession Day, marking the 70th anniversary since she ascended the throne. While enjoying the festivities, the queen donned a light blue dress with a floral, white pattern wrapped around her waist. She also wore a set of white pearls draped around her neck.

Throughout the event, she greeted guests while a brown, stick cane was by her side. As it turns out, the cane holds great meaning to the queen, being that it was Prince Philip’s cane. The duke passed away at the age of 99 in April of last year. He and the queen were married 73 years and shared four children.

Gyles Brandreth, an English broadcaster and writer, recognized the cane and recalled the late Duke of Edinburgh carrying it around the Sandringham estate.

“I recognized the stick instantly as it was always kept in a pot by the front door,” he told The Telegraph. “It was the duke's stick, and it is very touching that the queen has started using it.”

The last time Prince Philip used the cane in public was in 2013, after undergoing and recovering from abdominal surgery. He ﻿apparently only needed the cane to maneuver the Dersingham Bog on the estate

In October 2021, Queen Elizabeth was photographed using a walking cane to a Thanksgiving service at Westminster Abbey, which marked the first time she publicly used a cane since 2003.

What ﻿a meaningful way to honor the late Prince Philip.