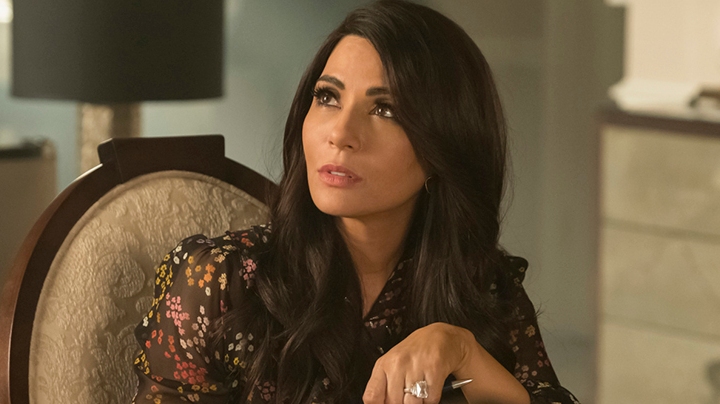 During the third season of Riverdale, I’ve pointed my finger at multiple characters for various mysteries: Archie Andrews (KP Apa) for—potentially—pulling the trigger, Penelope Blossom (Nathalie Boltt) for being an alleged serial killer, and Hiram Lodge (Mark Consuelos) for being the Gargoyle King…but what about Hermione Lodge (Marisol Nichols)?

After I watched last night’s episode of Riverdale, titled “Chapter Forty-Six: The Red Dahlia,” I couldn’t help but feel like Hermione is the low-key mastermind behind the town’s latest mysteries. Yes, the character has been flying under the radar for the past few episodes, but that doesn’t mean she doesn’t have her hands in just about everything.

In fact, the brand-new installment proved that Hermione knows far more than I initially thought. When Veronica (Camila Mendes) discovers that her mom’s name is listed on the Fizzle Rock paperwork, she confronts her, demanding answers.

Hermione reveals that she didn’t know about the drugs until it was too late. She did, however, create a distraction (the quarantine) so Hiram could shut down the factory. Unfortunately, he went behind her back and consolidated everything into the prison (or so she says).

While I wouldn’t be surprised by Hiram’s dishonesty, I find it extremely hard to believe that Hermione wasn’t filled in on the plan. Why? She’s the mayor. Not only is she supposed to be well-informed, but she also has the most to lose. So why not make Hiram do the dirty work and, in turn, keep the blood off her hands?

Even better, last night’s episode also revealed Hermione is having an affair with Michael Minetta (Henderson Wade), who was supposedly dead. But, as it turns out, the coroner faked an autopsy report after receiving a hefty payment from Hermione.

Unfortunately, Michael’s return was short-lived, considering Hermione fired several rounds at him during last night’s episode. Still, the fact that she had a secret sex slave that no one knew about is making us question just how innocent she is.

We’re on to you, Hermione. Riverdale returns to The CW next Wednesday, February 6, at 8 p.m.

Why Is ‘Riverdale’ Suddenly Over-sexualized?