Get ready to soak in all that Gilead has to offer because there’s only one more episode left in season two. (Yep, we’re sad, too.) 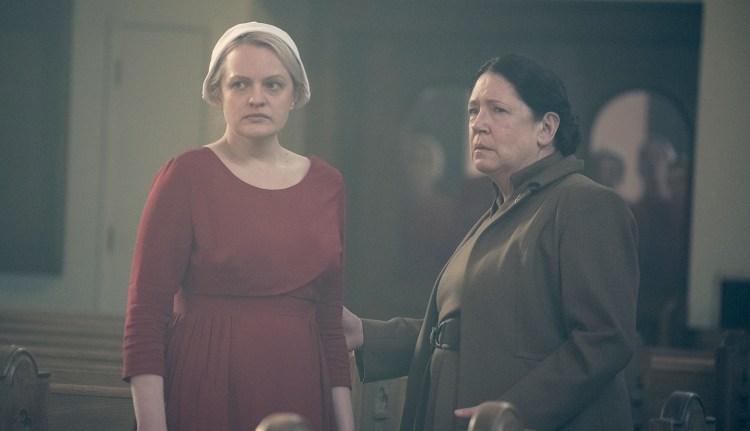 The episode opens on Serena (Yvonne Strahovski) bathing and feeding her “sweet baby angel” Nicole (FKA Holly).  She’s overjoyed to finally have her baby, unlike Offred (Elisabeth Moss), who is officially childless and miserably pumping out breast milk back at the Red Center. Aunt Lydia (Ann Dowd) is chipper as ever and asks Offred how her nether regions are doing. Another Aunt informs Aunt Lydia that Offred’s milk supply is diminishing since she has been separated from the baby, but Aunt Lydia brushes it aside and says they must follow Serena’s wishes regardless. Offred looks at her pointedly and says she promised to keep the baby safe, depriving her of food is hardly good parenting on Serena’s part.

Aunt Lydia refocuses the conversation on more positive things, like which family will get to rent Offred’s uterus next. The competition for her viable organs is so spirited that one family has even sent baked goods to bribe Aunt Lydia. Feeling generous, she lets Offred choose a muffin. She jokes, “I think I’ve earned an entire cake,” and Aunt Lydia quips back that prideful girls don’t get anything. When Offred realizes she chose a bran muffin, she can’t help but appreciate the irony. 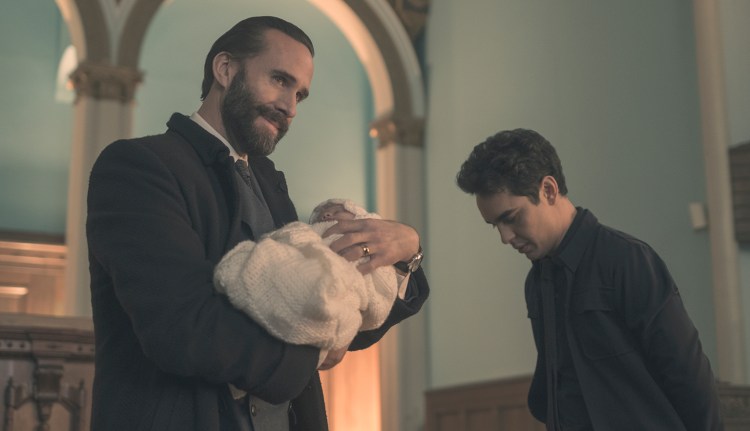 Thanks to the arrival of the Waterford’s new baby, the Commander (Joseph Fiennes) has a cushy new job running media point for Gilead. It comes complete with a swanky office, which Nick (Max Minghella) is helping him move into. They chat, and the Commander calls the whole Nick being kidnapped by Guardians thing a big “misunderstanding” and says he’s truly a hero. He also thanks Nick for his discretion and asks him to hang up a freshly painted Waterford family portrait. *Eye roll*

Back at the Waterford house, Serena and Eden (Sydney Sweeney) fawn over baby Nicole, and Serena compliments Eden’s way with her. Pleased, Eden says she hopes to have one of her own and Serena’s response just about makes us gag: “Patience and virtue and sacrifice and yet it’s all worth it.” Um, we’re pretty sure it was Offred who made the sacrifice, but OK.

Rita (Amanda Brugel) enters the room with a fresh bottle of milk and informs Serena that their supply is running low. She grits her teeth and grumbles that she knows how it works when Rita tries to explain why.

So, later Aunt Lydia takes Offred to meet Commander Waterford, Nick and the baby, explaining, “You’re not as productive as we’d like. Seeing her might prime the pump, so to speak.” And “prime the pump” it does. The moment the Commander lifts Nicole out of her carrier, Offred lactates through her dress. She begs to nurse Nicole, but the Commander refuses. Aunt Lydia tries to be the voice of reason and suggests he “consider what’s best” for his daughter and encourages him to let Offred return to the Waterford home for the sake of increasing her milk output.

Surprisingly he obliges, and Serena is furious. “Did you let her touch my child?” she tersely asks when he gets home. Calm, cool and collected, he responds that he didn’t, and she accuses him of foiling her plans to cultivate a “calm environment for Nicole.” Ultimately, she realizes she has no choice in the matter and levels with him, saying, “She has no contact with the baby, and she pumps in her room.” His response? “Mother knows best.” 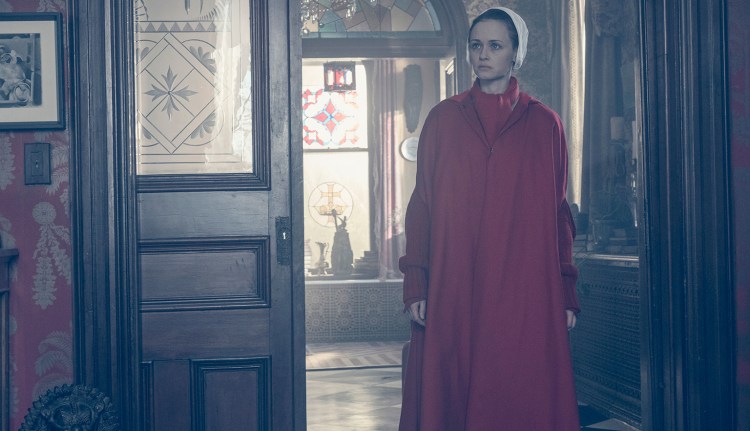 There’s A New Ofjoseph In Town

Offred isn’t the only one moving, though. Aunt Lydia escorts Emily (Alexis Bledel) to her new home and scolds her, saying, “You’re lucky they agreed. Four couples have refused. You’re running out of chances. You must behave. Commander Lawrence is a very brilliant, very important man. He’s considered the architect of Gilead’s economy.” Emily hesitates in the front yard and tells Aunt Lydia she’s “wondering why such an important, brilliant man would take in such a sh**ty handmaid.” For once, Aunt Lydia doesn’t have a response.

A Martha with a missing eye and a whole lot of attitude opens the door, and while they take in the disarray and eccentric decor, Commander Joseph Lawrence (Bradley Whitford) bounds down the stairway to greet them. Emily lowers her head and he silently peeks under her wings in creepy excitement but says nothing. After a brief exchange of pleasantries and Gilead jargon, he says, “Super,” and opens the front door so Aunt Lydia can leave. She’s dumbstruck and asks if Mrs. Lawrence will want to meet Emily before they make it ofish. He says she’s sick and bluntly tells her, “We’re good here,” before slamming the door.

He doesn’t lift his gaze on Emily until he hears commotion in the other room and yells at the Martha to not touch his stuff. When she responds that it’s in her way, he evenly asks if she’d like a beating. What an unconventional Gilead household this is.

While alone, Emily removes her wings and surveys her new surroundings. She comes upon an open book and can’t help but look at it. Commander Lawrence sneaks up on her and asks if she knows what the punishment is for reading. When she responds that it’s a finger, he tells her it used to be a hand “back in the good ol’ days.” Yikes. 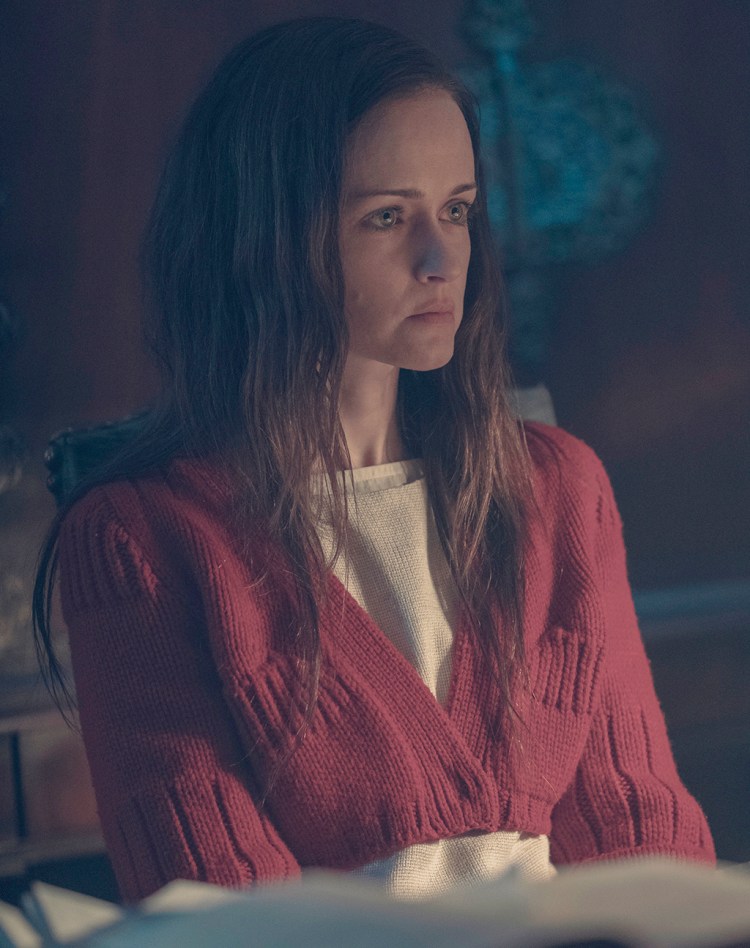 Later, Emily is in her new room when the unhinged Mrs. Lawrence enters and asks for her real name. “Don’t tell Joseph that I came in. He doesn’t like when I talk to the girls,” she begins. “He did something terrible, terrible. He came up with the whole thing…The Colonies. He planned everything. He figured it all out, and I said, ‘Real people are digging up that dirt and it’s poison. It’s Poison!’” She becomes hysterical and when the Commander rushes in to silence her she fights him off until he throws her in their room. He orders Emily to join him downstairs.

They sit at the dining table and the Commander pours two glasses of beer and pushes one her way. He tells her they value privacy in this house and when Emily asks if his wife is OK, he responds, “Life didn’t turn out the way she wanted it to. She was an art professor. She wanted everything to be beautiful.”

This particular fact allows him to segue into an inquisition about Emily’s past and he makes it clear he knows everything about her career and family. “Losing a child is like losing a limb. Like part of your body,” he pontificates. “But you know what that’s like, too. Have you healed properly?” She’s not sure how to answer and her eyes well up with tears. 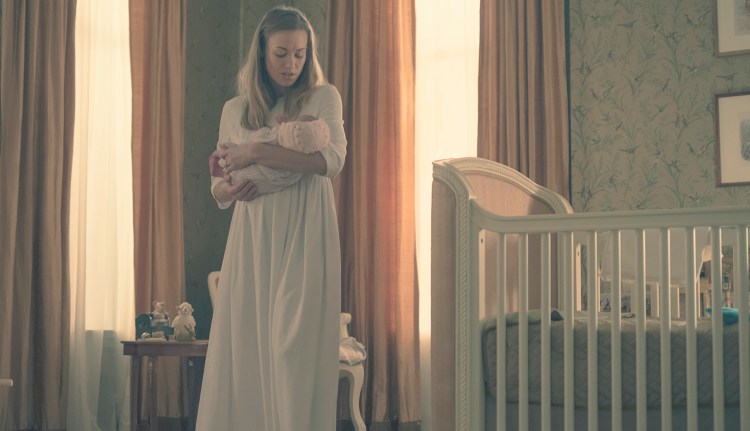 That evening, Offred’s heart breaks while she listens to her baby cry. She walks two fresh bottles of breast milk down to the kitchen and catches sight of Serena cradling her daughter. Eden greets her in the kitchen and asks if breastfeeding hurts, adding, “I can’t wait to feel it. To breastfeed I mean…God find me worthy.”

Before Offred heads back to her room, Eden poses a complicated question about God’s will: “He’d want a child to be raised by parents who really love each other, don’t you think?…What if you had that chance? For love and a baby.” Offred will never get that opportunity in Gilead, but Eden doesn’t seem to recognize that.

Offred tells her she doesn’t have to worry about the whole Nick love triangle because she’ll be gone soon but admits that in a place so devoid of kindness Eden should cling to love wherever she finds it.

The next morning, Nick tells Offred that he can’t find Eden and they take a brief moment to catch up. “Our baby is so beautiful. I wish I could hold her,” he begins. Offred says she does, too, and they fantasize about running away to Maui and playing on the beach while Holly tries to eat sand. It’s romantic, until the Commander walks in and informs Nick that Isaac (Rohan Mead) never showed up for his shift. Putting two and two together, Nick says they have a “situation” on their hands.

The Commander is enraged that Eden and Isaac have run off together and complains to Serena while she cradles a fussy Nicole. “Do you know what this looks like for me? I gave her the opportunity to elevate herself. To become a wife, a mother, to be associated with the Waterford name…A married woman swept up in her own selfish lust,” he yells. But Serena isn’t interested in his “rancor” and tells him to find Eden but leave her out of it. She has enough on her plate.

Nicole remains fussy throughout the day and when she won’t stop crying, Serena tries to nurse her and immediately feels overcome by guilt and shame for not being able to produce the sustenance her baby needs.

Later, Offred is smelling Nicole’s dirty laundry (there’s nothing like that new baby scent) when the Commander enters the kitchen. They chitchat about Eden and he confronts Offred and asks where she was hiding when he and Serena came to the abandoned house to search for her. She responds that she was in the attic but that her heartbeat was too loud to hear his blowout fight with Serena. He asks about her surprise meeting with Hannah (Jordana Blake) and they make loose plans to play Scrabble again, but his leering glance says he wants more than triple word scores. 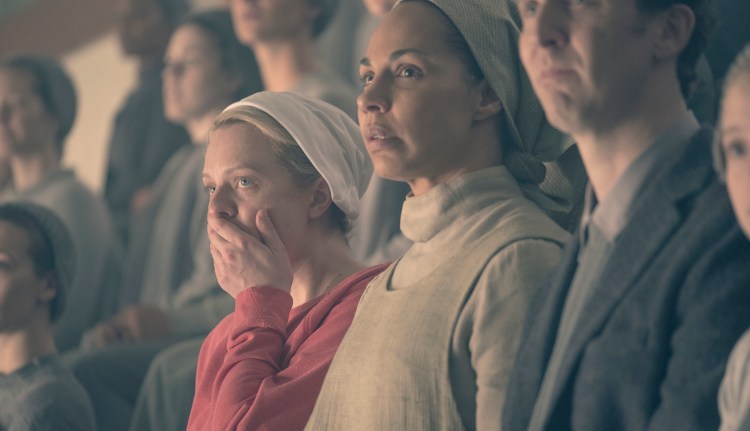 In the morning, Rita wakes up Offred and tells her that Eden has been found. Nick tries to reason with Eden and get her to say that she’s pregnant or to claim that Isaac forced her to run away against her will. She says she can’t because she loves him. “All I wanted was to make a real family. Isn’t that what Gilead wants of its servants?” she implores. Panicked, Nick says they can still have a baby if she repents and he apologizes for not being a better husband. She kisses him and even though he tells her she has her whole life ahead of her, it’s clear she plans to die for her love.

Eden and Isaac’s family has gathered at a high school pool to watch them pay for their sins. The star-crossed lovers are made to climb the ladder to a high diving board and are shackled to weights. A Commander implores them to renounce their sins and plead for God’s mercy. He repeats himself again and again, but Eden and Isaac stay silent until she begins to recite the “love is patient” Bible verse. They’re pushed into the pool and drown while everyone watches in horror.

Later, Offred tries to comfort Nick but he pulls away. Next, she checks on Serena and asks how she’s doing after witnessing such a horrible event. She’s surprisingly more amenable to conversation and spews some Bible verses until Nicole begins to cry again. Offred volunteers to get her a bottle, but Serena insinuates she should nurse the little girl instead. She does and they both look on in wonder.

Have no idea what’s going to happen next? Um, same here. Guess we’ll have to wait and see when the season two finale (say it ain’t so!) of The Handmaid’s Tale hits Hulu Wednesday, July 11.