What It Means to Be a “Real” New Yorker, According to Jonathan Adler, Naomi Watts and 9 Other Ride-or-Die NYC-ers 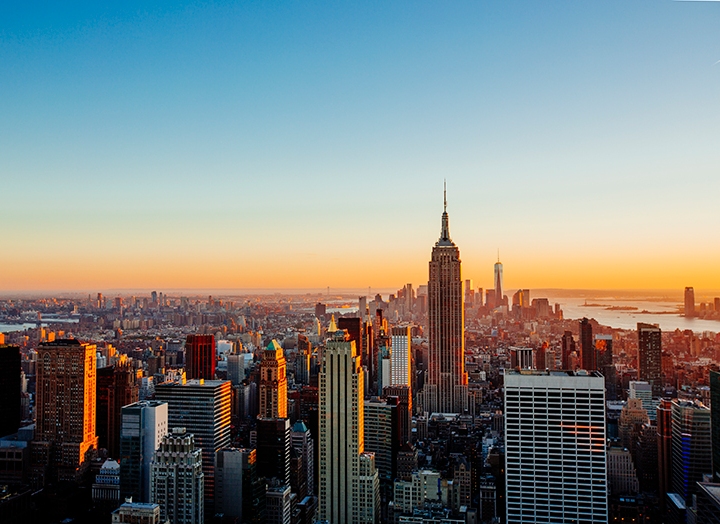 It was my first trip to New York City with my then boyfriend (now husband) and we were on the 1 train when someone spotted…something. As we looked around on the ground to try to find the offending rodent we realized that the rider wasn’t pointing down, but up. After some discussion, our fellow passengers decided that it was not, in fact, a rat or a mouse hanging from the subway ceiling, but actually a sleeping bat. But even when the bat appeared to wake from his slumber to rub his eyes (it was kind of cute, actually), nobody screamed or ran away. Everyone simply…went along with their day. And when my partner and I eventually got off the train, my immediate reaction wasn’t disgust or shock or concern. Instead, I remember thinking “God, I love this city.” And my next thought: “I have to move here.”

New Yorkers are undeniably unfazed. Which is exactly how actress Naomi Watts knew she belonged.

“I had been living in New York for three years and the moment I knew I was a true New Yorker was when my water broke in a taxi cab (I left a good tip). Off I trotted to the Roosevelt Hospital to give birth to my second child,” she tells us. “Before that, I had always felt unnerved by New York’s freneticism, then I had my baby, a true born New Yorker, and somehow, I knew I belonged and became equipped to manage the city’s chaos.”

Shoebox-sized apartments, rodent-infested subways, chaos at every street corner… New Yorkers take it all in stride—and even with a sense of pride.

This has perhaps never been more true than in these pandemic times. In 2020, New York City saw unprecedented businesses shutter down, residential buildings clear out and tourist hot spots deserted (remember the famous “New York is dead” article?). It also saw droves of people flee the city, prompting those who stayed behind to say… “really?”

Because, sure, living in the city isn’t for everyone. But for those who stick it out, it’s impossible to imagine living anywhere else. And for those who manage to endure the city, calling yourself a New Yorker is the ultimate badge of honor.

“The first time I truly felt like a real New Yorker was the first time I was cursed out by a random person walking along the street corner,” Peloton instructor Tunde Oyeneyin says. “In any other city I would have felt singled out, outraged or even attacked. But in NYC, it’s a rite of passage. I felt like I had just arrived.”(Another transplant fondly recalled her “New York moment” when an off-leash dog ran out in front of her through a crosswalk and a man in his car yelled at her to “put your f*cking dog on a leash,” prompting her to yell back, “it’s not my f*cking dog, you jerk!”)

And there’s a reason why they say you have to live in New York for 10 years before you can actually consider yourself a “real” New Yorker—you have to prove that you can hack it. But this 10-year rule seems so arbitrary. We wanted to know when you really are a New Yorker? And so, we turned to an array of transplants—including celebrities, authors and just plain old regular folk—to find out.

First of All, What Type of Person Moves to New York?

“Where we live ties into our identity,” says author Kyle Lucia Wu. Wu moved to New York when she was 18 and explores how the city shapes one’s sense of self in her latest novel, Win Me Something. “With Willa [the main character in her novel], New York is so much of what she’s seeing every day and so much of what she’s making her life around.”

But Wu—and Willa—could have lived anywhere. What is it about New York that draws so many people to it? (According to some estimates, more than 50 percent of New Yorkers are transplants.)

“So many people move to New York because they didn’t feel at home where they were born and raised,” says Jill E. Daino, a licensed therapist with Talkspace, and NYC local for the last 35 years. “There’s all those stories of people who couldn’t wait to leave where they were from in order to find their people. And I think that’s one of the beauties of somewhere like New York— there truly is someone or something for everybody.”

In terms of population size, at 8.8 million, New York City boasts the largest in the whole country. So yeah, it makes sense that whatever your interests, hobbies, jobs or passions, you’ll probably find it here.

“I’ve had clients whose hobby is glassblowing. I’ve had people who are art curators. I’ve had people that are artists, dancers, writers, teachers. I mean, it’s just truly something for everyone. And that is very unique and different than, let’s say, if you were growing up in a small town somewhere,” adds Daino.

But a city this massive can make it hard to find your feet. And for many, just knowing where the hell you’re going is an indicator of belonging. “I’m a total product of my environment,” celebrity realtor Ryan Serhant agrees. “I felt like a New Yorker when I could show apartments without looking at MapQuest in 2008!”

Similarly, Liz Halpern, a stay at home mom who has called New York home for 19 years, realized she belonged in the city when she was able to figure out which subway route to take without having to look at the map. (“Also, being brave—or dumb—enough to run in Central Park after dark with a fork in my pocket for protection.”)

“Every time I run into a friend on the streets or on the subway, it feels very New York-y, but especially the very first time it happened,” says Brian Flaherty, an assistant director who’s been in the city for eight years. And speaking of the subway, if you know where on the train platform you need to stand to best get to your exit/transfer, well, then you’re definitely a New Yorker.

Our Identity is Tied to Our Proximity to Others

Another inescapable quirk of the city’s dense population is that we’re kind of in each other’s faces....like, all the time.

“So much of New York is observing this public, intimate life of other people,” Wu says. “I grew up in a suburb and being in a place that doesn't have that kind of public life means you’re only seeing people at their most ready…you’re only seeing people the way that they want to be seen. And so I think what's really interesting about New York is you’re constantly seeing people at their most vulnerable.” And because we’re always so up close and personal with each other, it’s practically impossible to not be influenced by what we see around us. “When you live in a place that's driving-centric, you might not see as many other people as when you live in a city with public transit, where you have to pass people constantly and ride next to people. I think that all of that ties into how we start to experience the world,” she adds.

“When did I feel like a real New Yorker? When I walked home to Brooklyn from midtown during the 2005 transit strike!” says Jillian Quint, Editor-in-Chief of PureWow.

But for all the stories of strikes, delays and yes, rodents, on the MTA, there are flashes of genuine human connection.

“There’s so many moments of great empathy in New York in a way that I don't always experience in other cities,” says Wu. “I feel like everyone in New York has been someone crying on the subway or fighting with their significant other. You just catch people in these kind of tender, vulnerable moments a lot. And that feels like a moment of connection, even if you don't quite interact with that person.”

But What If You Can’t Make It Here?

“There is absolutely a kind of badge of honor about living in New York,” says Daino. “The ‘If you can make it here, you can make it anywhere’ mentality. I mean, that song has stayed popular for a reason. Or think about the Alicia Keys song—it’s all about the dreams and the hopes that are tied into what it means to make it in New York.”

For designer Jonathan Adler, the feeling of “making it” went hand-in-hand with his sense of belonging: “I opened my first store in 1998 in Soho. I was there working the register and overheard a woman on her (giant) cell phone telling her friend she was ‘at Jonathan Adler’ and would be home soon. I was a place! I made it!”

Because the city can be brutal. In a city of 8.8 million people, loneliness is a common concern with her clients, Daino tells us.

“Sometimes it's not the right fit,” the therapist says. “I found that especially with some of my younger clients, it’s about helping them come to terms with the fact that it's OK to leave. Because it can eat you up, it can be a lonely place.”

The flip side of constantly seeing so many people in the city, says Wu, is that you frequently come into contact with people who have more than you. “Whether that's more money or more friends or more space, you know, there's always evidence of that. So in the same way that you’re seeing people living their tender, vulnerable lives, you’re also seeing all these lives that maybe you'll never have.” And that can be a difficult feeling to wrap your head around.

Perhaps that’s exactly why those who can survive the loneliness and the inequality (and, yes, the subway rats) are so proud of their resilience that they insist that only those who have suffered for 10 years can claim to be an actual New Yorker.

So, When Can You Call Yourself a “Real” New Yorker?

For some, the sense of belonging all comes down to a feeling. “You know you're a real New Yorker when no matter how long you're gone for, when you come back, it always feels like home,” says Jami Attenberg, author of I Came All This Way To Meet You: Writing Myself Home.

And for others, it’s a moment in time. “When my coffee cart guy memorized my order and let me cut in front of tourists… that felt like a uniquely New York accomplishment,” Emily Hepworth, a Senior Manager at Integral Ad Science, maintains. “This was in Times Square and my coffee guy was a beacon of light in that hellscape.”

And as for that 10-year rule? Ask those who live here and the time stamp doesn’t seem to matter so much. “There are some people that get here and they are fish in water right away,” says Daino (although she adds that she thinks it takes people at least six months to truly feel a sense of belonging.)

So maybe there is no litmus test for New Yorker-ness. Or if there is, then it’s really just as simple as Wu imagines: “I guess you’re a New Yorker if you really feel like one.”

Want to read more stories about NYC? Sign up to our newsletter here.

home
by Sydney Meister
Nate Berkus Just Told Us How to Create a Capsule Wardrobe For Your Home in 5 Simple Steps
home
by Destinee Scott
If You Only Buy One Candle This Valentine's Day, Make It This Glasshouse Fragrances Find
home
by Sydney Meister
The Coziest, Chicest Luxury Bedding We’ve Seen, From Frette and Matouk
home
by Destinee Scott
The Wayfair Big Furniture Sale Is Up to 50 Percent Off & We Found 12 Items That Won't Disappoint
home
by Karelle Mckay
Is the Viral Bissell Steam Shot Cleaner Really Worth the Hype? Here’s Our Honest Review
home
by Sydney Meister
These 5 Top Bedroom Trends of 2023 Are All the Inspo You Need to Refresh Your Space