Gardening can be a matter of perspective: One person’s weed is another person’s flower! But some types of weeds are not just a blip on the radar; they can take over your grass in a hurry if left alone. “Prevention is always easier than treating after the fact,” says Clint Waltz, Ph.D., extension turfgrass specialist at the University of Georgia’s Turfgrass Research & Education Center. “But it’s also important to have realistic expectations. There’s no such thing as perfection, and most of us will never achieve the look of a putting green for a front lawn.”

However, there’s plenty you can do to keep things in check. For starters, many weeds are best controlled with a pre-emergent herbicide, which is put down before the weeds appear and create a barrier so that their seeds cannot germinate, says Waltz. If you’d prefer an organic option, know its limitations: Research shows that most products currently available don’t control weeds well and can be as toxic as synthetic types. Plus, they’ll require repeat application, won’t control mature or perennial weeds, and are non-selective (meaning they suppress all plant growth they contact, not just the weeds, so you may kill grass, too, if you’re not careful about where you apply it).

Most importantly—and we can’t stress this enough—no matter what you’re thinking about using, identify what kind of grass you have before applying anything because some types of grasses can be damaged by certain weed control products.

Typically, the type of grass in your yard falls into two main categories: Warm season and cool season. Warm season grasses grow during the warm times of year, roughly May to September; they’re mostly found in the South. Cool season grasses grow during cooler times of year, typically from December to early February; they’re mostly found in the north and upper third of the country. In transitional parts of the country such as the Mid-Atlantic, you may have both types, says Waltz.

If you’re not sure about what you have, talk to your local university coop extension service (find yours here) for identification and regional care tips. Finally, when using any product, take your time and read the labels before use. We know it’s not the most fascinating reading, but you’ll have better control when you use the product as it’s been tested.

Banana Peel Fertilizer Does it Really Work? Here’s What You Should Know

Here are the most common types of weeds to watch for: 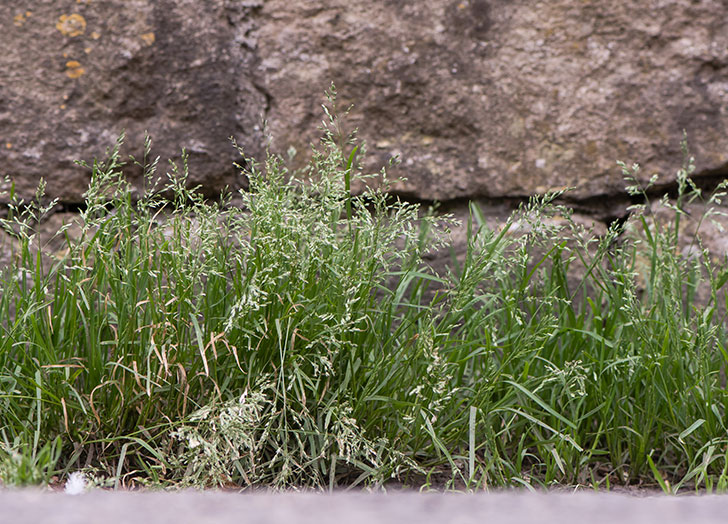 This weed appears in both lawns and ornamental plantings and is a winter annual. “It’s jokingly called the ‘cockroach’ of the weed world, because it’s difficult to control and resistant to many herbicides,” says Waltz. Annual bluegrass germinates from August to March or April; it’s especially easy to spot in warm season lawns because its lime-green blades appear in February or March.

How to Control It: Use a pre-emergent weed control in August or September for the following season. Mow at the proper height for your type of grass, and don’t mow too low, which can stress the grass so that weeds can get a foothold. 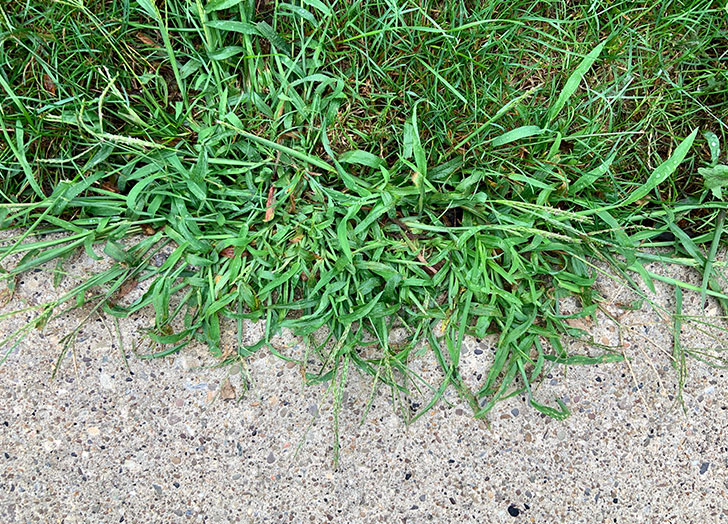 Universally hated, crabgrass is a summer annual weed that germinates when the soil surface temperatures reach 55 degrees F. The good news is that it can be effectively controlled if you use a preventive herbicide.

How to Control It: Use a pre-emergent weed control (such as Preen Weed Preventer or Scotts Halts Crabgrass Preventer); split the application with half in March and half 45 to 60 days later to preempt any emerging stragglers. It’s a prolific seed producer, and seeds can hang around for years in the soil. If you didn’t get pre-emerge down, dig up individual clumps with a weeding tool when they’re small. It’s a challenging job, but there’s not anything available to homeowners that’s effective once it’s sprouted. Mowing at the highest height for your type of grass also helps reduce crabgrass infestations. 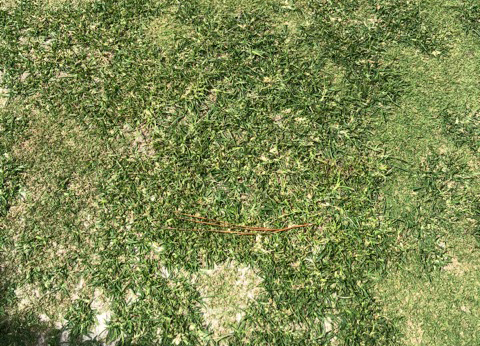 Goosegrass is a summer annual weed, which germinates later in the season than crabgrass. It’s often found in high-traffic areas of the lawn where grass is sparse. The blades lie open and have a silvery center with seedheads.

How to Control It: Unfortunately, the pre-emergent products that control crabgrass don’t work that well on goosegrass, which also may develop resistance to herbicides. You can spot treat it with a post-emergent herbicide (aka one designed for weeds that have already sprouted in your lawn) but that will kill the grass, too. If you’re having major issues, consult a professional turf company, which will have more options available. 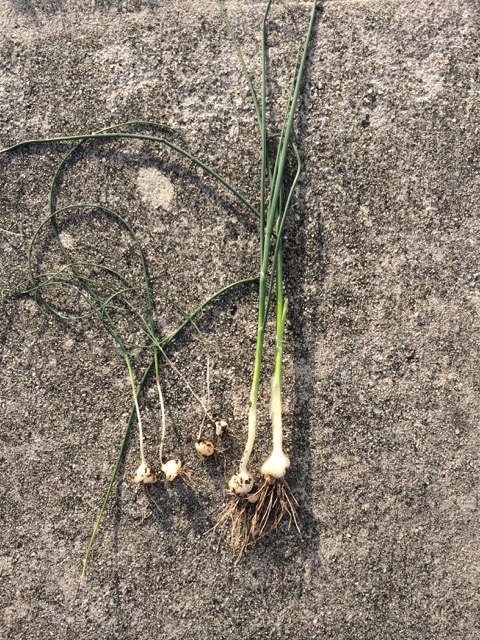 Sometimes these perennial weeds are easier to smell when you cut that grass rather than see in your lawn. Wild garlic and wild onion are in the allium species and have underground bulbs, a waxy exterior and a straight leaf. They look similar to chives, a relative. They will go a little crazy and take over if left unchecked.

How to Control It: Pre-emergent herbicides don’t work, but post-emergent herbicide is effective; look for those that are three-way (it will say that on the bag). Or dig the bulbs up individually, though it can be difficult to get all the little bulblets. 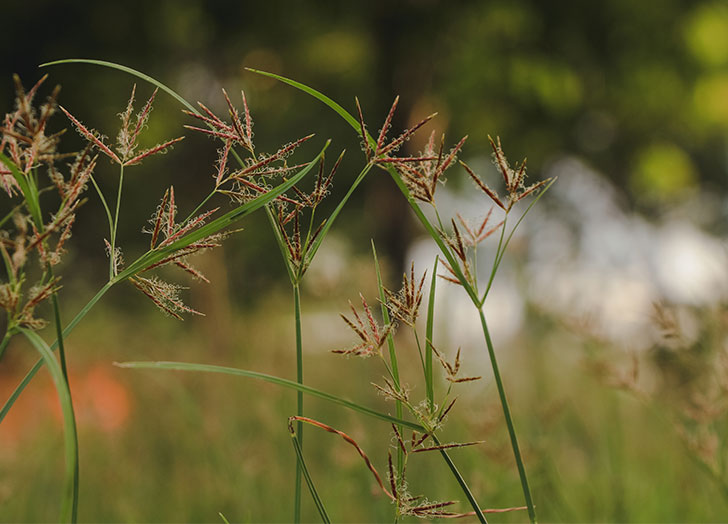 These are stubborn perennial weeds with a stem that feels triangular when rolled between your fingers. “They’ll pop up quickly,” says Waltz. “You can mow on Monday, and by Thursday, you’ll see them appear above the grass canopy.” They are underground tubers that store carbohydrates, so they come back every year. 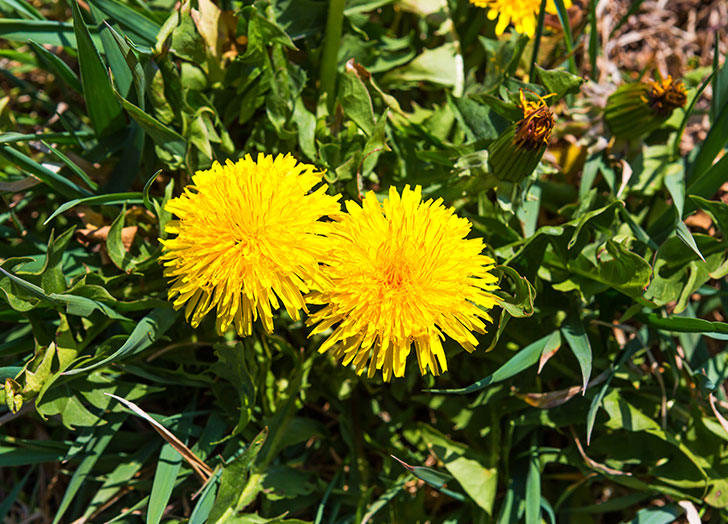 These perennial broadleaf weeds will take over a lawn quickly if left untreated. “If you have 10 this year, you’ll have 100 next year,” says Waltz. They have a deep tap root that’s difficult to dig out.

How to Control It: Any three-way herbicide is effective. You may need to do two applications, according to package directions, if the plants are large and more mature. Or you can spot-spray with the same type of product. 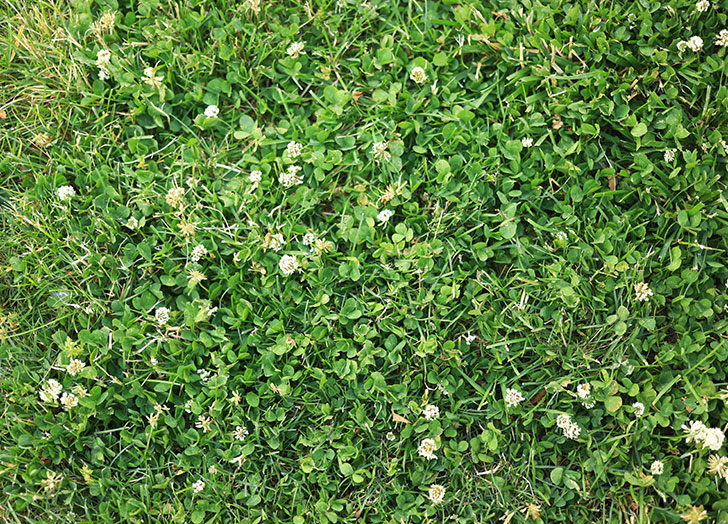 Here’s another perennial plant that will take over if left unattended. Interestingly, it was once used as a desirable part of turf seed mixes. It’s a legume, so it makes its own nitrogen and grows rapidly. It’s also not necessary (or possible) to eradicate clover, because it provides some plant diversity and is a source of food for honeybees.

How to Control It: Treatment is similar to treating dandelions. Pre-emergent herbicides don’t work, so use a three-way for control. (Or simply learn to live with it.) 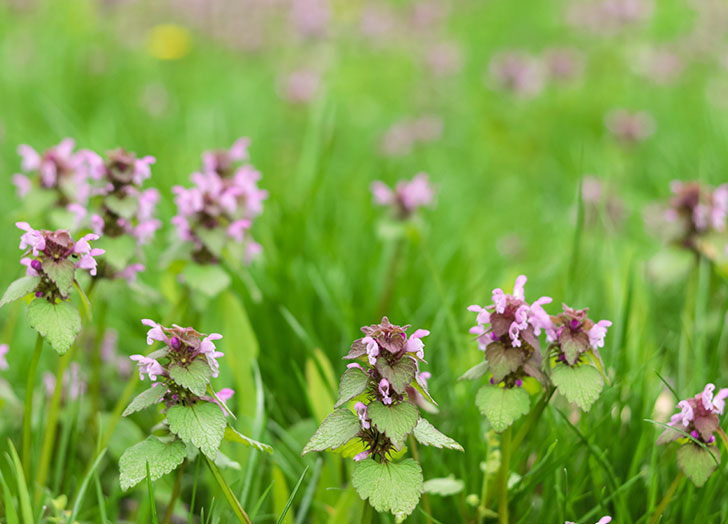 These winter annuals look very similar and are members of the mint family, so they can spread rapidly. They germinate in mid to late winter and can take over if left uncontrolled.

How to Control It: Granular three-way herbicides are effective. Or a low mowing, if caught early in the spring from January to March in the south or April to May in the north, may be sufficient to control these weeds. 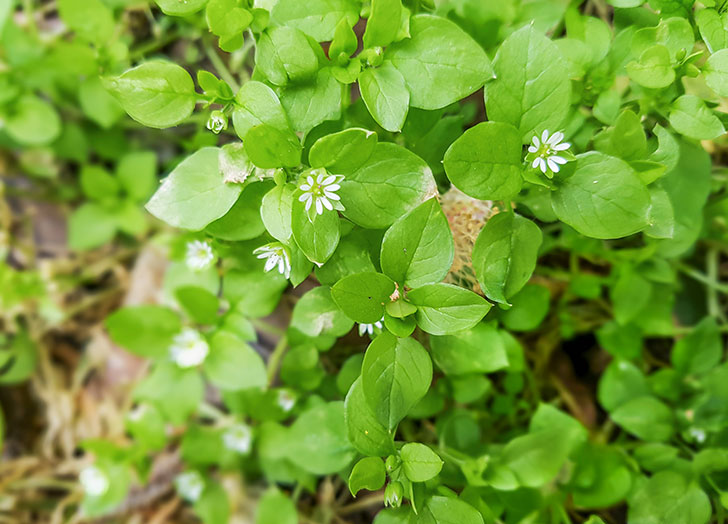 This winter annual is a low, spreading weed that likes cool, wet weather. It has teeny white flowers, and each plant can produce up to 800 seeds (yup, that’s not a typo) that can lie dormant in the soil for 10 years.

How to Control It: Follow the same controls as above for henbit/dead nettle. 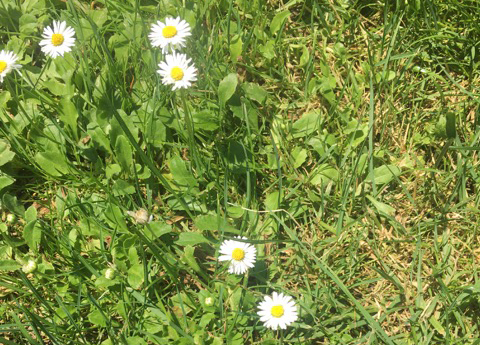 These perennial plants (which some people would say aren’t really weeds!) generally are more common in northern laws. They spread by underground rhizomes, and their foliage resembles dandelion leaves. Their showy flowers are quite pretty, but they can form a thick mat if left unchecked.

How to Control It: Spot-spraying with a three-way herbicide is effective. Some homeowners go natural and leave scattered patches for a cottage garden feel. 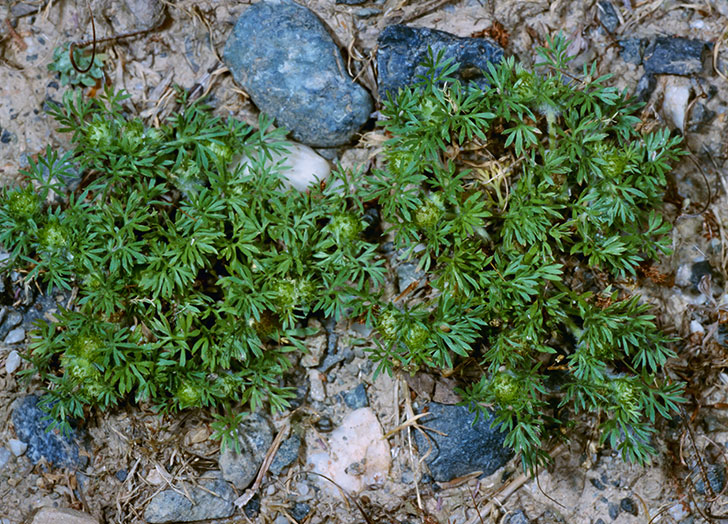 This is a winter annual weed that germinates in the fall and looks similar to parsley. It forms a dense mat and will get worse every year if not controlled. The tiny hard-to-see spines, or seed capsules, dry out in mid to late spring and become an annoyance as they stick to, well, everything—such as your shoes, bare feet, lawn mower and pets. It’s particularly pesky in the South. Catch it early or you’ll be dealing with the burs for a long time.

How to Control It: If you can identify the weed in late winter, apply a post-emergent herbicide right away. It’s easier to control before it forms burs in the spring. 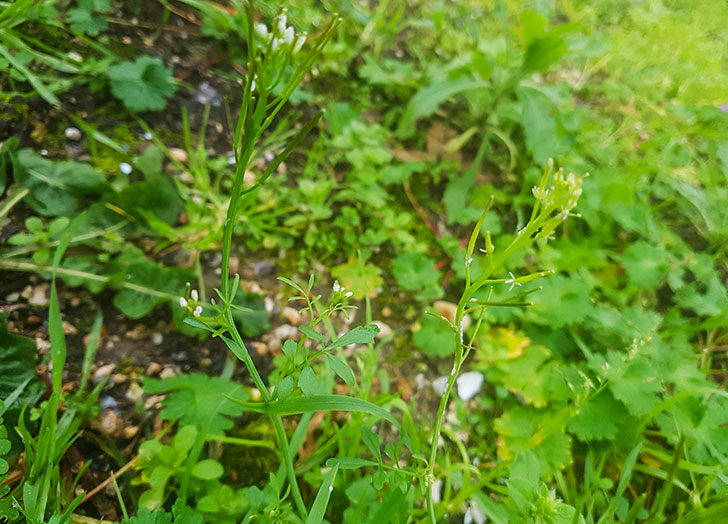 Hairy bittercress is one of the first annual weeds to pop up in early spring. It’s a member of the mustard family with shallow roots and long, narrow seedpods that can launch seeds up to several feet away.

How to Control It: Use a three-way post emergent herbicide to spot treat, or pull up individual weeds before they go to seed. Frequent mowing in early spring also can remove flower stems. 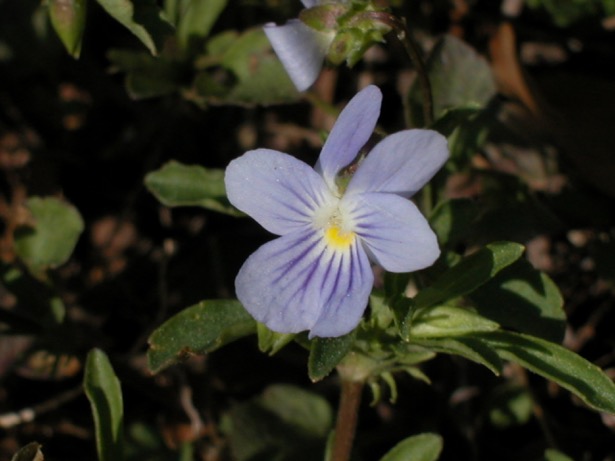 These perennial weeds have tiny flowers with waxy leaves and are rather pretty, but they are aggressive, spreading by underground rhizomes. They can form clumps or thick masses in the lawn. They’re often found in tall fescue, shade or where soils are compacted.

How to Control It: They are not easy to control, and pre-emergent herbicides are not effective. Use a three-way herbicide and spot-spray with repeat applications. 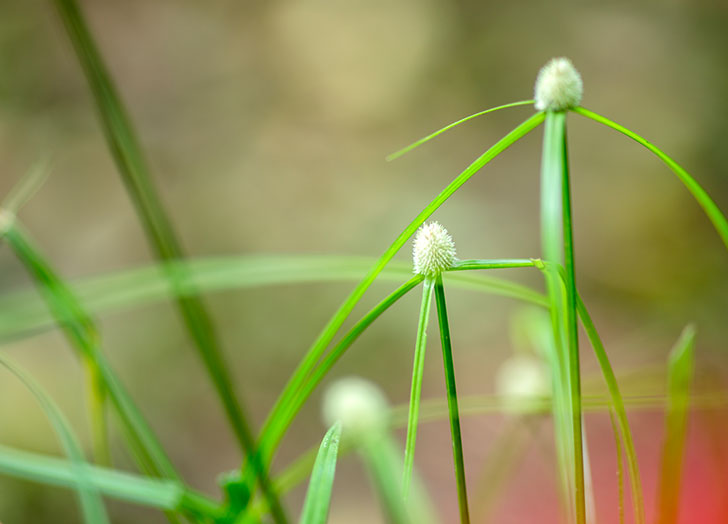 This perennial weed is another type of sedge that is difficult to control and has a grass-like appearance with roundish seedheads. It can grow faster than your lawn, quickly taking over if left unchecked.

How to Control It: Use a post-emergent herbicide labeled specifically for sedges. Multiple applications may be required. 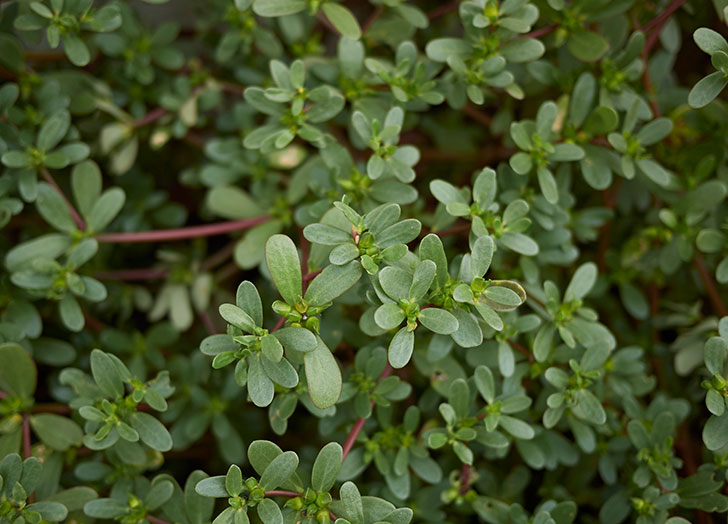 Often found in thinning or newly seeded turf, this low-growing annual weed emerges in mid-spring and spreads laterally. Common purslane has smooth pink or red stems that lie close to the ground with succulent-like leaves and tiny yellow flowers.

How to Control It: Use post-emergent herbicides that are labeled specifically for control of purslane.