If it seems like Selena Gomez is popping up everywhere these days, you’re not wrong. She’s got a new collaboration with Blackpink dropping on August 28, a custom ice cream to celebrate said launch (because what is music nowadays, but an opp for merch?), a beauty line launching a few days after that and a cooking show she filmed during quarantine that airs every Thursday. But one thing seems to be garnering just as much attention as her new projects: the knife set she uses on her HBOMax show, Selena + Chef. Seriously.

In just about every episode—which features the singer video chatting with a chef as they both prepare one of the cook’s signature dishes—the guest chef comments on the aqua-handled knives, which feature shimmery, iridescent blades. “It’s like a Coachella knife,” chef Antonia Lofaso tells Gomez.

Chef Ludo Lefebvre even asks Gomez to prove the knives are sharp enough to withstand the chopping and dicing he has planned, asking her to slice through a sheet of paper with one. When it does, he admits he’s never seen knives like that.

But it’s not just the chefs who are impressed. Fans have been tweeting about them nonstop too. “The unexpected stars of the show are the (coachella) knives,” @blackpink4xo wrote.

“I’m currently watching Selena and chef and I think it’s so cute how Selena is donating $10,000 to different charities each episode. UGH AND I ALSO REALLY WANT HER KNIFE SET,” @slimkilla420 tweeted. 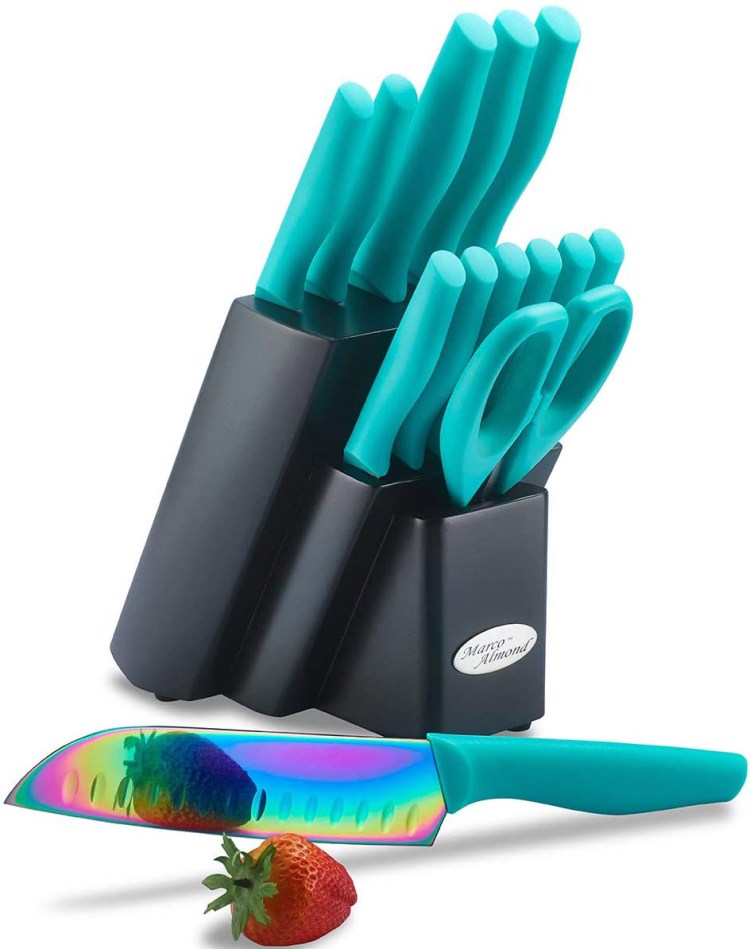 The set, which features a rainbow titanium coating, has more than 2,123 reviews on Amazon, 84 percent of which give it five stars. Reviewers rave that they’re extra sharp, well made and that the rainbow color doesn’t fade from the blades after multiple washes. Plus, at $53 for the 14-piece set, which includes an 8-inch chef’s knife, a serrated bread knife, shears and a wooden block to store them all, it’s one of the more affordable knife sets you can buy.

The biggest complaint? Some say water spots start appearing on the knives and they’re hard to get off. (One reviewer said the fix for this was immediately towel-drying the knives, BTW.)

All in all, it’s hard to imagine anyone could’ve predicted the hype surrounding a set of knives. Unless it’s all part of a larger plan: “In sel+chef, they’ve mentioned her knife every episode. I know what we’re getting next. SELENA and knife collab,” @oliviasscerri tweeted.