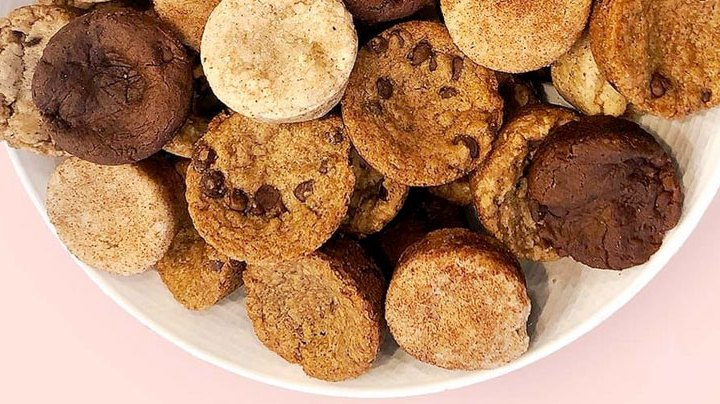 To take a cookie—which is mostly butter and flour—and make it both gluten- and dairy-free is…not an easy task. Believe us, we’ve tried. So we were intrigued when we heard about FOMO Baking Co., a new brand that makes cookie bites that are not only gluten- and dairy-free, but soy-, nut- and egg-free, too. Usually (and unfortunately), allergen-free baked goods are a little lackluster in the flavor department. We were lucky enough to receive FOMO samples, so we immediately put them to the test.

When the cookie bites arrived, we were greeted by a pastel tie-dye box, so before even tasting anything, we were impressed. (For better or for worse, we're suckers for cute packaging.) Inside, the cookie bites looked a little like mini cupcakes without their tops. Among the assortment were chocolate chip, oatmeal raisin, snickerdoodle, sugar cookie and brownie flavors, all made in a cross-contaminant-free bakery. It was 10 a.m. and we hadn’t had breakfast, but duty called.

Associate editor Abby Hepworth grabbed an oatmeal raisin piece first, while food editor Katherine Gillen gingerly bit into chocolate chip. Her thoughts? “I'm pleasantly surprised,” she said. “If I didn’t know this was allergen-free, I wouldn’t be able to tell.” Hepworth, who later told us her favorite cookie happens to be oatmeal raisin, agreed that she was impressed. “It was chewy and cinnamon-y, and really lovely. I didn’t notice it was missing anything.” Later in the day, our editors also nibbled on a sugar cookie bite—it wasn’t our favorite of the bunch, but the other flavors made up for it.

The final verdict? Even if you don’t have food allergies, FOMO’s cookie bites hold up in the flavor department. At $30 for a pack of 25, they’re a little pricey, but if you’ve been missing out on standard baked goods, we say worth it.

18 Nut-Free Recipes for Kids with Allergies

53 Winter Soups You Can Make in 45 Minutes or Less