Is Potty Talk Good For Kids? What the Experts Say Might Make You Poop Your Pants 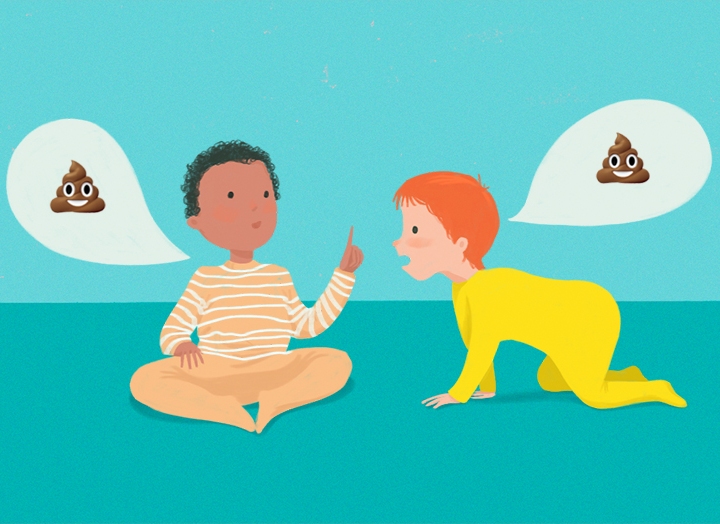 You might not find references to defecation at the dinner table particularly charming, but the little kid in your life wholeheartedly disagrees. Indeed, this behavior, so ubiquitous among children, can get pretty tiresome—but is potty talk for kids even a problem that needs to be addressed? And if so, is the solution to a) put the kibosh on it, b) lighten up and let it slide or c) achieve some delicate and nuanced balance between the two? Here’s what Kristene Geering, child development expert and content director at Parent Lab, has to say on the subject. (Spoiler: It’s not that big of a deal and the best solution is C.)

What is potty talk?

According to Geering, potty talk can mean different things to different families, but in general it refers to the popular habit among children of striking up uncouth conversation—you know, the kind that revolves around private parts of the body and corresponding bodily functions. In other words, if you’re blushing because your kid is gleefully riffing about poop, pee, penises, vaginas, diarrhea, buttholes and boobs, you might have a potty talk problem on your hands. (And yes, that’s just a short list of vocab words—we’ll leave the creative stuff to the kids.) Is all this potty talk a problem, though, or are you just a big prude (aka poopy-butt)?

Yes, yes it is. But if you’ve ever spent any time around your (offending) child’s peers, you likely aren’t surprised to learn that potty talk is a very common—and thus, presumably developmentally appropriate—phenomenon that typically begins in preschool-aged kids and can continue for varying lengths of time, and for different reasons.

As it relates to younger children, Geering says that potty talk can be explained by the fact that “they're still trying to figure out the whole language thing and the potty is also still pretty new…When you think about the sheer number of words we have in English to describe just feces and urine, let alone our more hidden anatomical parts, it's no wonder our kids spend so much time exploring the ways to discuss these daily functions.” Fair enough—it does make sense that a recently potty-trained tot might be excited to prattle on about poop and pee with no regard for decorum.

Still, if you have a cousin twice-removed whose bigger kid is still engaging in a (slightly more sophisticated version) of the same thing, that distant relative is probably wondering how ashamed they should feel.of their spawn’s propensity for potty talk. (After all, toilet training and first words are certainly in the rearview by age 7, right?) Alas, the exploratory potential of potty talk doesn’t expire when kids are old enough to wipe their own butts—namely because kids are comedic geniuses who know how to test boundaries like nobody’s business.

The expert tells us that potty language tends to return at some point in elementary school, and this time around it’s with the intention of getting a reaction. OK, you might be rather unimpressed by your budding stand-up’s ode to flatulence, but you'd be wise to know that your annoyance has been duly noted—and a joke that makes you uncomfortable is in many ways just as successful as one that makes you laugh. The good news? “This scatological humor is one of the signs that a child is starting to understand more about the world around them, including how their words and actions impact others,” says Geering. So check yourself and proceed to the next section, lest you inadvertently encourage your kid’s unsavory conversation style.

Should potty talk be encouraged?

The truth is that there’s nothing inherently wrong with potty talk. It is, indeed, a developmentally appropriate behavior in preschool and elementary school-aged kids that will naturally recede into the background and disappear over time as new social skills are developed. Until that happens, Geering encourages parents to remember that potty talk is a sign that kids are “moving along in terms of their cognitive, communicative, and social-emotional development.” That said, no one really wants to be the parent whose kid starts chanting about stinky buttholes at Great Aunt Rita’s Thanksgiving dinner—and (despite your famously good sense of humor) the daily potty talk in your own home is more overkill than comedy. We get it—and the expert says that, while you should avoid overreacting, you don’t need to laugh along when the language occurs in an inappropriate context.

OK…but how can you stop your kid from using potty talk All The Time?

You’re all about supporting your kid through developmental leaps, but let’s face it—the potty phase can be pretty annoying. Fortunately, there are some strategies to gently and effectively discourage the behavior. For younger kids (think: preschool age) Geering recommends ignoring the words—any reaction on your part just gives them more importance—and modeling the language you’d rather hear from your kid. With older kids, though, there’s no need to beat around the bush: “explain to them clearly how the language they're using affects other people, including how others might feel about them (the child),” says Geering, adding that as a parent herself she has “often told [her] kids that using [potty talk] constantly makes it seem like their vocabulary is small, and then given them a plethora of other options.” In other words, feel free to be direct with bigger kids about the fact that, when it comes to conversation and comedy alike, potty talk isn’t the most interesting route to take.

Above all, Geering encourages parents to remember that “words are just words…and there may be a time and place where [any particular word] is the appropriate choice,” especially when you factor in your child’s developmental age—so try to laugh along when you can and address the less desirable instances of potty talk with either the ignore-and-model approach or by telling it like it is. Easy peasy.

18 Things a Pediatrician Always Has in Her Medicine Cabinet