Dog Body Language: 45 Ways Your Dog Is Secretly Communicating with You

Some days, it feels like dogs can read our minds. They nuzzle us when we’re sad or get pumped at walk time. Other days, the language barrier between our species is starker than ever. We say, “Come inside,” and they refuse. Or we say, “No chewing,” and they dig into our shoes anyway. In an effort to better understand our canine family members, we’ve rounded up 45 ways your dog is actually communicating with you. Understanding dog body language is the first step in knowing how to respond. Our advice? Be observant and patient—you’re not a mind reader either.

While navigating this extensive list, remember your goal is to be a translator for your pup. To do this, you have to look at your dog’s entire body and listen to all the sounds she makes. This advice comes from the Center for Shelter Dogs at the Cummings School of Veterinary Medicine at Tufts University. They break down dog communication (both verbal and physical) into five categories: fearful, aggressive, anxious, relaxed and excited. Most canine communication combines more than one of these categories. So, to understand what’s really going on with Sadie, look at the whole picture, including the context of the situation.

Context is almost more important than what your dog is doing. If you’re playing tug-of-war and she growls, it’s probably playful (excited). If you’re walking in a new neighborhood and she growls, she may sense something dangerous (fearful). Always factor context into your interpretation of your dog’s communication.

According to experts at VCA Ark Animal Hospitals, canines express emotions through physicality. They aren’t always telling us what their intentions are but simply how they feel in a given situation. Physical communication can include anything from a stance or movement to an action Sadie takes. Again, look at the whole dog to understand what she’s telling you. Key spots include the ears, tail, eyes and mouth. Be on the lookout for changes in physicality, too. A fearful physical response can swiftly turn into an aggressive one.

As with people, sometimes actions speak louder than words. These actions, unlike physicalizations, may take place when you’re not looking. Staying in tune with your dog’s actions even when you’re not home is difficult but key to understanding what she’s telling you.

Just like physical communication, a dog’s vocalizations clue us in to how they feel. Again, it’s imperative you take the entire picture into consideration. What is Sadie’s body doing when she barks? Is she whining right before mealtime or because a stranger is approaching her? These extra clues will help you understand what she’s saying.

45 Ways Your Dog Is Communicating with You 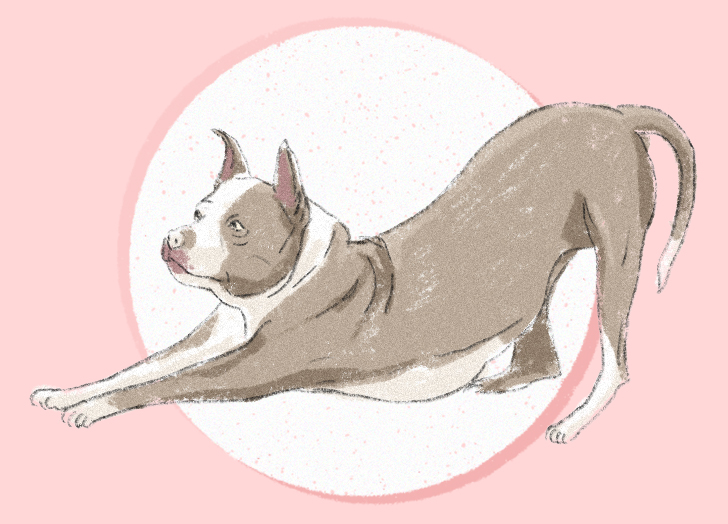 When pups lean into the yoga position named after them (butt in the air, chest and front legs stretched out in front), it typically means they’re ready for playtime. Prepare thy Frisbee.

During mealtime (or just after), licking the nose and lips is a grooming behavior. All other instances signal anxiety, fear or caution.

Oddly enough, yawning is considered a fearful response to stimuli. It means Sadie is eager for a threat to go away, not that she’s tired.

If Sadie looks like she’s trying to make herself smaller or lower, she’s likely anxious, afraid or stressed out.

A tail tucked between the legs is a sure sign your pup is afraid. It’s also called an appeasement behavior because it indicates she isn’t in the mood to fight whatever she fears.

Trembling or shivering in response to a new person or another dog means your pup is scared. If it’s freezing cold outside, put a sweater on her!

Shaking is a great way for dogs to de-stress and ask for some space. Shaking persistently could be a sign of an ear infection, so monitor this behavior if it happens on the reg.

Dogs who won’t look you (or another dog) in the eye are exhibiting caution and avoiding a threat, like the moment she knows you know who got into the trash bin. 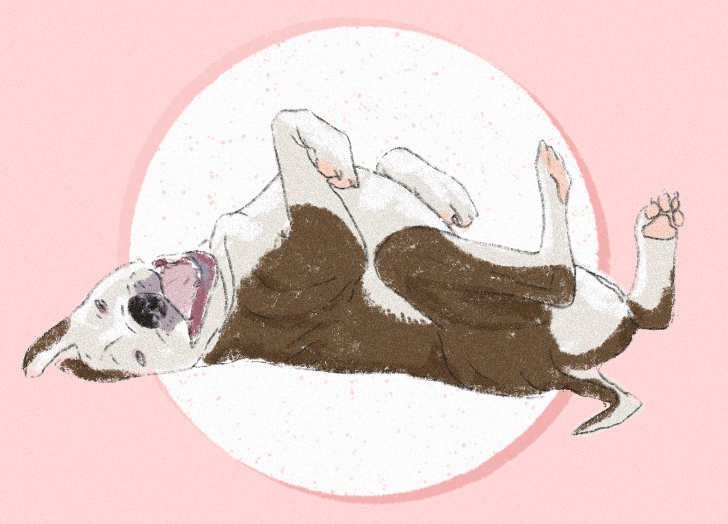 10. Rolling Over, Exposing The Belly

Take a good look at the situation and your dog’s temperament if she does this. This is a very submissive move. It could mean she’s afraid, or it could mean she trusts you and is looking for a generous tummy rub.

Dogs licking their humans is a sign of affection. Just like cats (gasp!), dogs lick to groom themselves and each other. So, either they consider you one of their pack or you just gave them a treat and they can smell the crumbs on you.

Focused licking on paws or paw pads could mean a skin condition like atopic dermatitis. Sadie might also be suffering from extreme boredom.

Ears that are perked up or facing forward are prepped for action. This means your dog is at attention; she could easily switch gears and get aggressive or playful, depending on the scenario. Note: If you catch her off-guard or scare her in this moment, chances are she’ll escalate into a fear-based response. 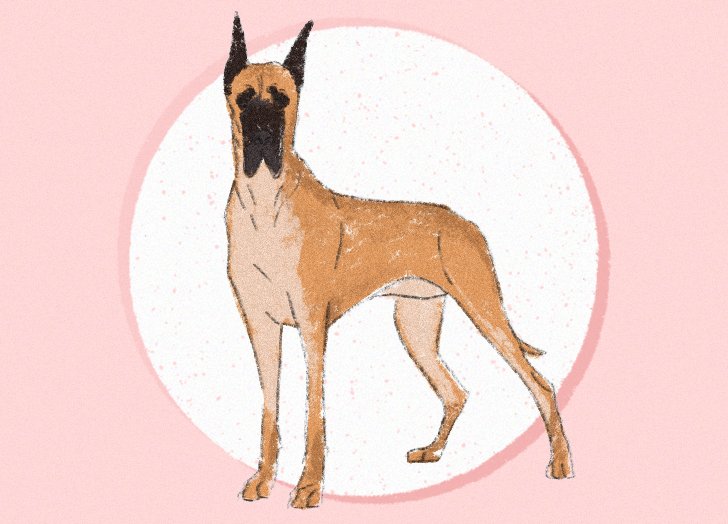 A dog who stands this way with a tightly clenched jaw and alert ears or bristled fur could be readying herself for a fight.

A dog who stands tall but appears relaxed, or has his mouth hanging open and tail wagging, is happy to see you.

Your dog is feeling happy or excited.

Your dog is feeling threatened and may snap or bite next.

A dog who paces back and forth is one full of anxiety. (If this only happens right before you leave the house, your dog may suffer from separation anxiety.)

This is a heightened version of pacing. Yes, some dogs spin slowly before finding the right spot to lie down. But rapid pacing combined with whining or panting is a sure sign your dog is worried or anxious.

Hair prickling on the back of our neck usually means “beware.” The same goes for dogs. When the fur on their back and hind quarters stands on end or bristles, they’re on high alert and easily excitable.

Yes, dogs pant to cool themselves down on hot days. They also use it as a stress reliever. A constantly panting dog is a dog full of worry.

One of the first indicators your dog is about to get aggressive is a full-body stiffening. It’s often paired with alert ears, tall stance, wide eyes and a closed mouth.

It’s hard to get one without the other. A canine curling her lips and wrinkling her nose usually precedes some fighting words (deep growling). 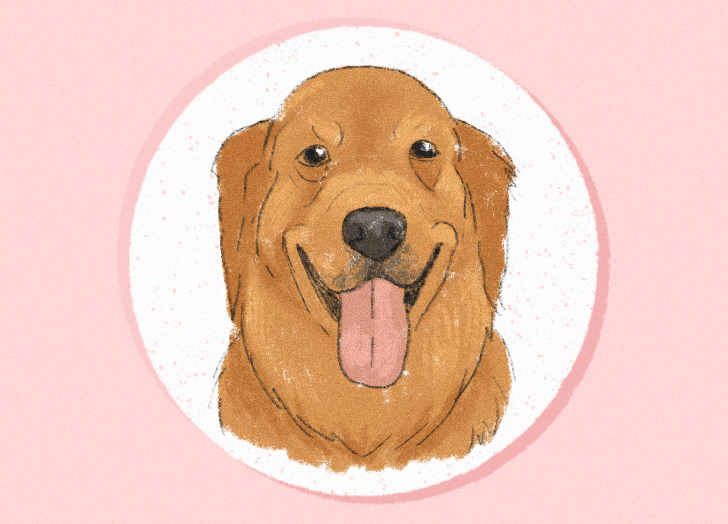 Some dogs almost look like they’re smiling in this relaxed pose. It definitely means Sadie is chill and in a positive headspace.

We had to address it! Sadie’s sense of smell is 10,000 times more powerful than yours, so naturally she uses it to gather information on you. She may greet you with a sniff in that area as a friendly way of saying, “What’s up?” It’s the same reason dogs greet each other by sniffing butts.

This is usually the next step on the aggression ladder after curling lips and wrinkling noses. It means Sadie’s behavior is escalating.

Lunging, barking and growling at other dogs while on a leash could be a sign of leash aggression. This has to do with your dog’s relationship to her leash; she likely feels restricted by it or anxious wearing it, so she lashes out at approaching pups.

The sight of damp paw prints in your house (when it hasn’t been raining) could mean your dog is really stressed out. Canines sweat through their paw pads. If Sadie is sweating so much she’s leaving a trail, check in on her anxiety levels.

Refusing to eat, pulling away when you reach out to her and growing lethargic are all signs your dog is anxious, fearful or ill. Shutting down like this requires a lot of observation on your part to figure out the cause, so be aware of other vocal and physical signs.

Large, open, alert eyes staring at an opponent mean your dog is readying herself for combat. Can you see lots of white around her pupils? Big-time aggression.

32. Circling before lying down

Dogs will circle a comfy spot before actually lying down because their ancestors did the same thing before turning in for the night. Sure, wolves had to do it to prep their bed of leaves for a good night’s rest, but your dog doesn’t know the difference. 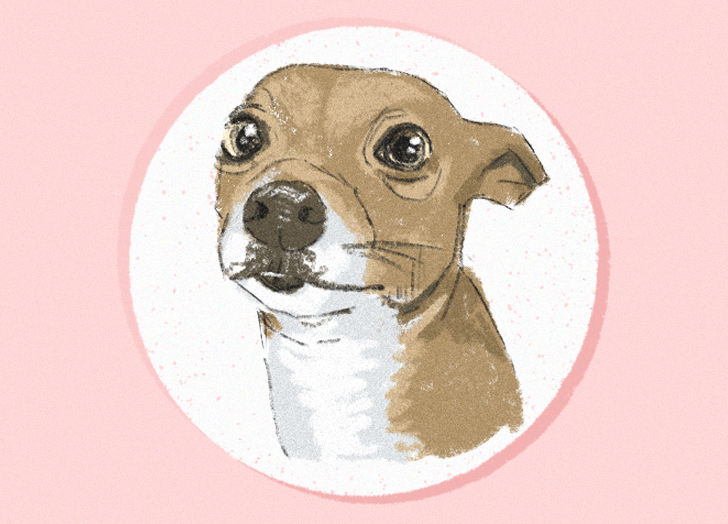 Paired with a wagging tail, this typically means your dog is happy and calm. If you hear growls or aggressive behavior, it means your pup is ready to pounce. Since some dogs have long, floppy ears, the ASPCA recommends looking at the base of the ear to really understand what your dog is trying to communicate.

Stanley Coren, author of Born to Bark and many more books on canines, tells Psychology Today that the pitch, duration and repetition of a dog’s bark help us interpret what a dog is trying to say. Low growls are associated with aggression and warding off threats.

The more high-pitched the growl, the less threatening. Now, this doesn’t mean a Chihuahua’s growl is less aggressive than a German shepherd’s. It’s important to learn what low growls and high growls sound like from your dog. High-pitched growls tend to be more playful and often come out during games like tug-of-war.

A few short growls in a row or several sporadic growls are Sadie’s way of letting you know she’s assessing the situation. She’s scared or uncertain about something; let her feel it out for a minute.

Mmm-k! Sadie has made up her mind and she is deliberately growling at something. The longer the growl, the more serious she is about her decision.

38. Lots of vocalizations in a row

When it comes to repetition, the more your pup repeats a sound, the more urgent the need. This could mean she’s super excited to see the UPS lady walking up the driveway or she’s afraid of the new friend you brought home. Either way, she’s entering crisis mode.

I’m happy to see you! I’m excited to play! Let’s go outside so I can pee!

I’m afraid of you and may fight back.

Whining may be the closest thing dogs have to real (human) words. More often than not, it indicates a specific want. Is Sadie pacing and whining around her food bowl? Girl is hungry. Is she whining at the back door? She’s ready to go out.

If your dog constantly whines only when you leave the house, she could be trying to tell you she’s afraid to be alone. If she stops eating her food and whines at dinnertime, she may have internal health issues.

Breeds that howl are usually trying to communicate with other dogs, according to the American Kennel Club. Sometimes it’s to get their owner’s attention. Other times it’s a response to sounds like sirens or other dogs.

Honestly, this noise is as straightforward as it gets. You’ll often hear it as a dog plops down onto her bed just after you’ve told her to lie down. She’s a little annoyed but settling in nonetheless.

Hello, canine purrs! Fancy seeing you here! Dogs purr—sometimes called rumbling—to let you know they’re content as can be. It may sound a bit like a growl, so check out the context to see if you’ve got a dog that purrs.

How to Stop Leash Aggression, According to Experts and Real Dog Owners